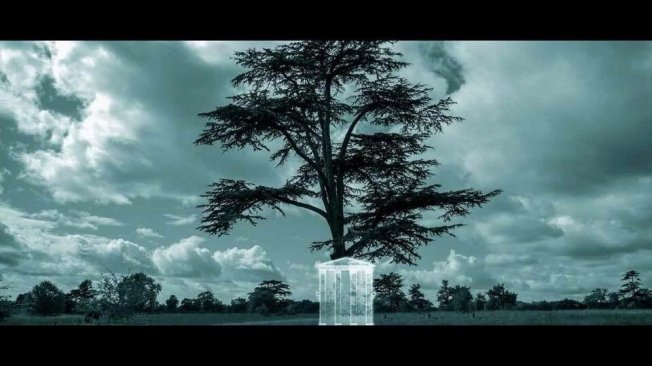 In September it was revealed Chris Alton had decided on a Tree House for his artwork. The Room 204ers was asked to submit poems on this theme by the end of September. We had 10 days which is not long to write, settle and edit the work. I submitted mine on a phone from London, born from visual memories not notes.

The work of Sarah James, Nadia Kingsley, Nina Lewis, Jacqui Rowe and Louise Stokes was then used as the basis for the dance choreographed and performed on the launch day by BITA (Birmingham Institute of Theatre Arts) and the Kimichi School. Some of the words from the poems are performed as they dance.

The five poems can also be found on display with the Adam Speaks Exhibition. Who knows, maybe one day they will adorn the walls of the Tree House.

Then official invites were sent out for the Launch 25th November. 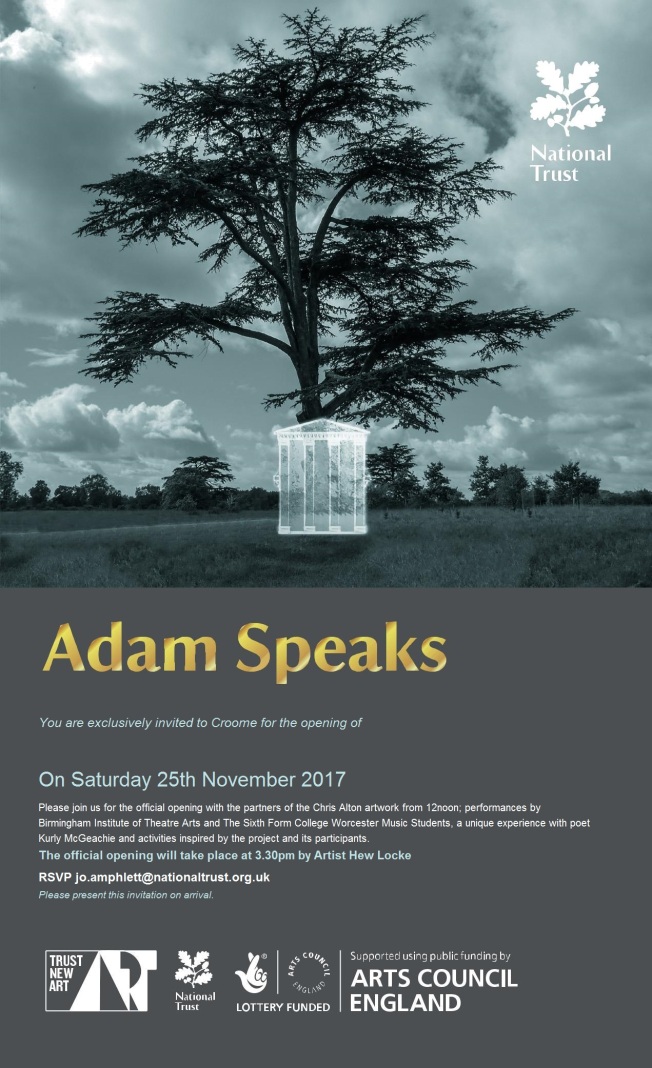 I was very excited and delighted with what I saw from the top of the hill. The NT have been regularly updating the commission and Chris has tweeted about it and I had attempted to avoid all of it as I didn’t want any spoilers.

I had seen this. 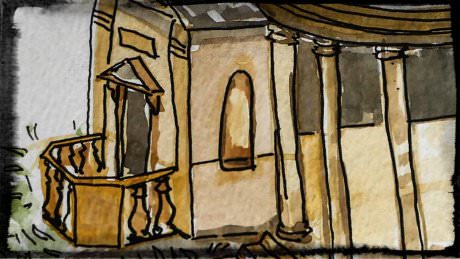 My excitement mounted as I reached the bottom of the hill and saw the Tree House up close, the Marquee with free cupcakes, blue icing matching the interior walls of the Tree House and my friend Kurly! 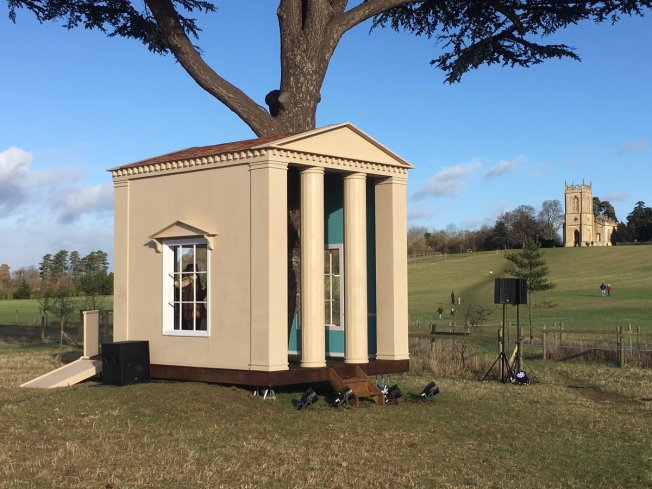 After a quick sugar rush I caught up with Kurly and Chris and headed into the Long Gallery to watch the performances. I caught up with Kiki and Rachel Sharpe and spoke to some audience members who were keen to find out more about the partnerships and creative sessions with Chris. 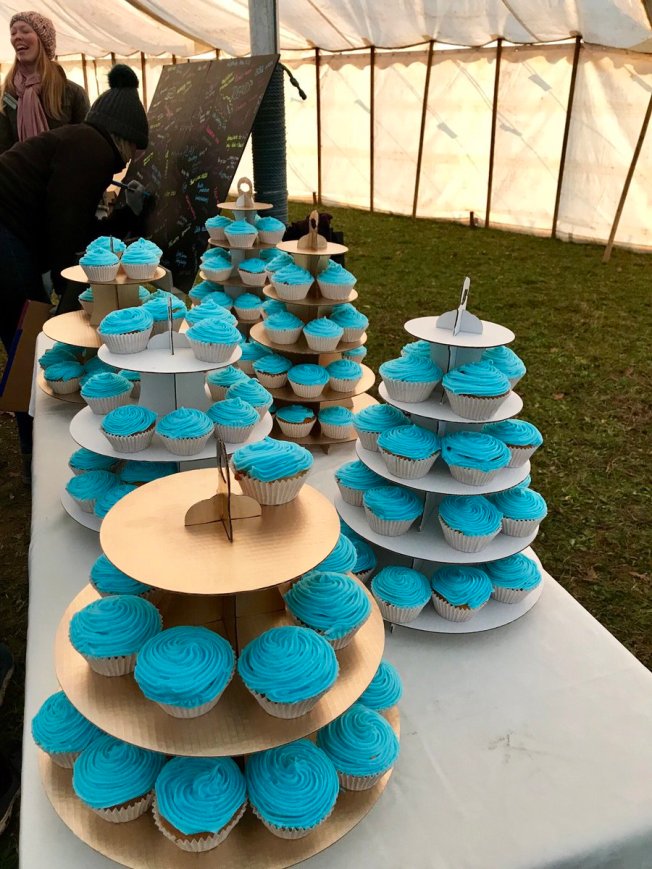 I was amazed by the BITA/Kimichi School performance of Adam Speaks. It was moving, powerful and just made me want to dance. 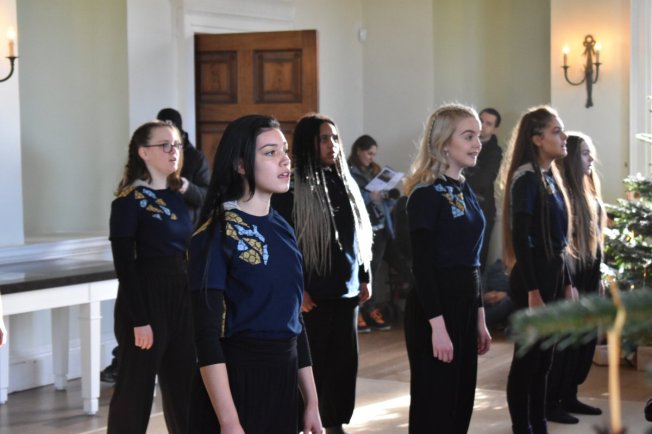 After this I caught up with Natalie McVey and Chris Alton. Then I went to explore the poetry and exhibition downstairs in the Participation Area. Which is a good place to put it – I am sure children will be very interested in the magnificent tree house and I know this area downstairs has the Croome Court activities, so whilst the children are occupied the parents can take a good look at the display which explains the project and offers some of Chris’s sketches and designs as well as our Tree House Poems. 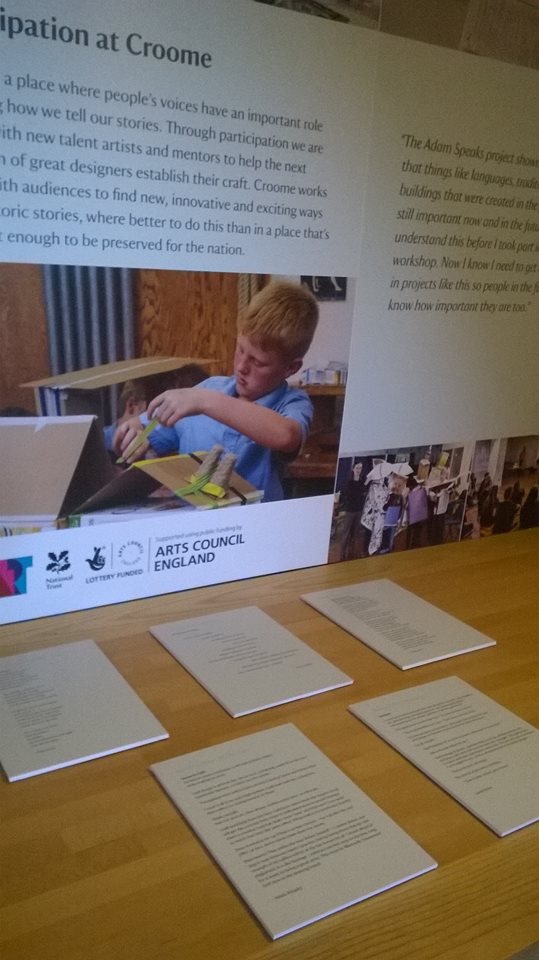 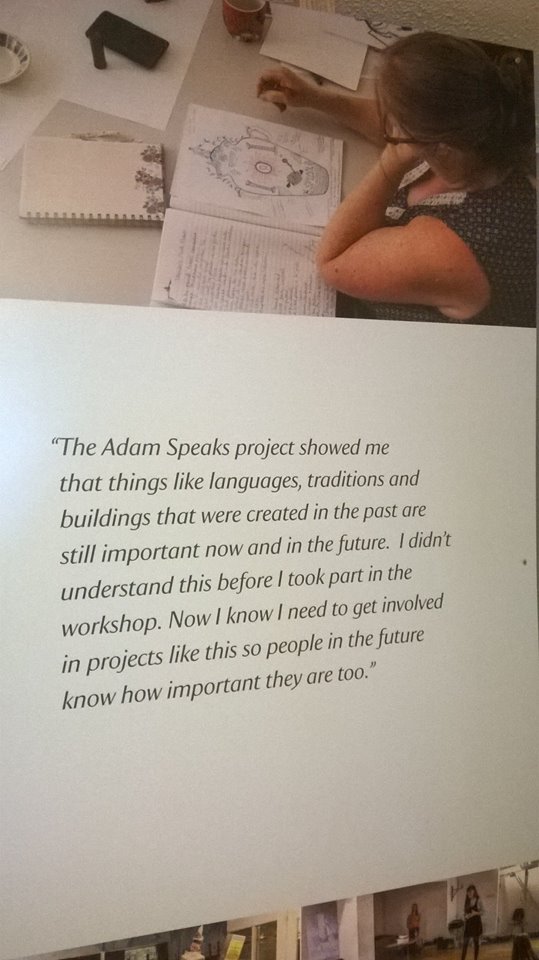 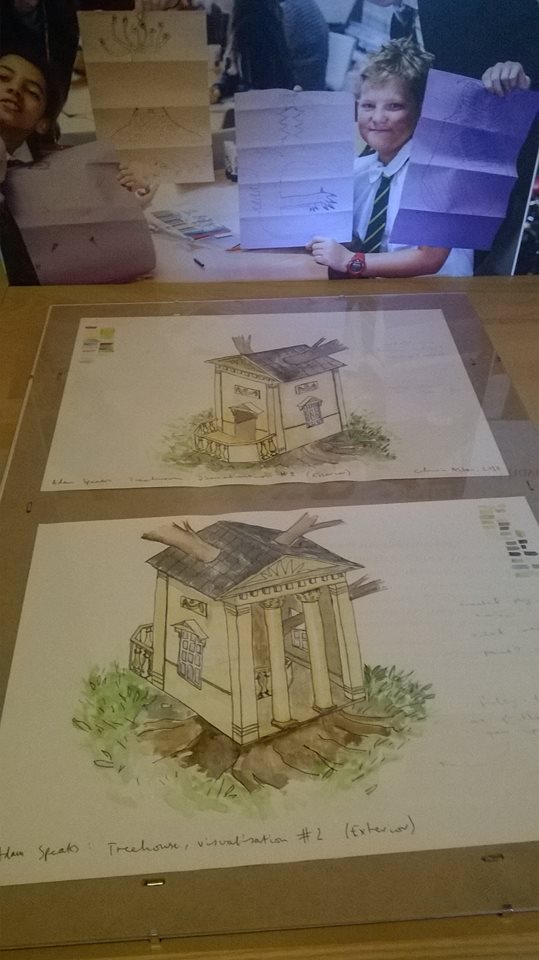 Later I was back in the Long Gallery listening to music from the era performed by Musicians from Worcester Sixth Form College (where I studied Theatre/Dance/English many moons ago), people were enjoying the room filled with classical music and Christmas Trees. Again, I spoke to complete strangers about Adam Speaks. Then I was treated to the Performance/Dance again before the official speeches from the NT team, Chris Alton and Hew Locke. 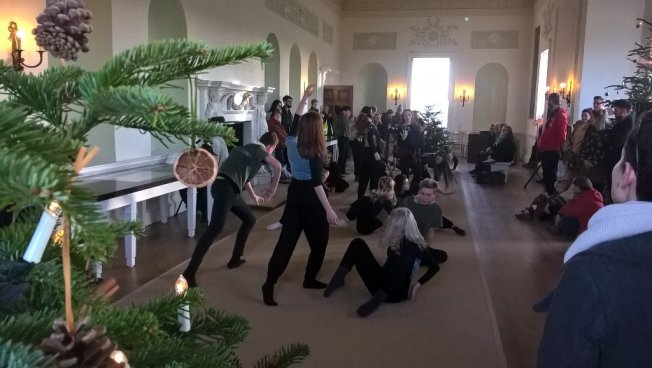 Chris talked about he thought Adam would have enjoyed this as a child, that childhood dream to have a tree house. He mentioned before he graduated he promised himself never to build art bigger than he could carry… he talked about all the groups participating in this project exercising our imaginations. 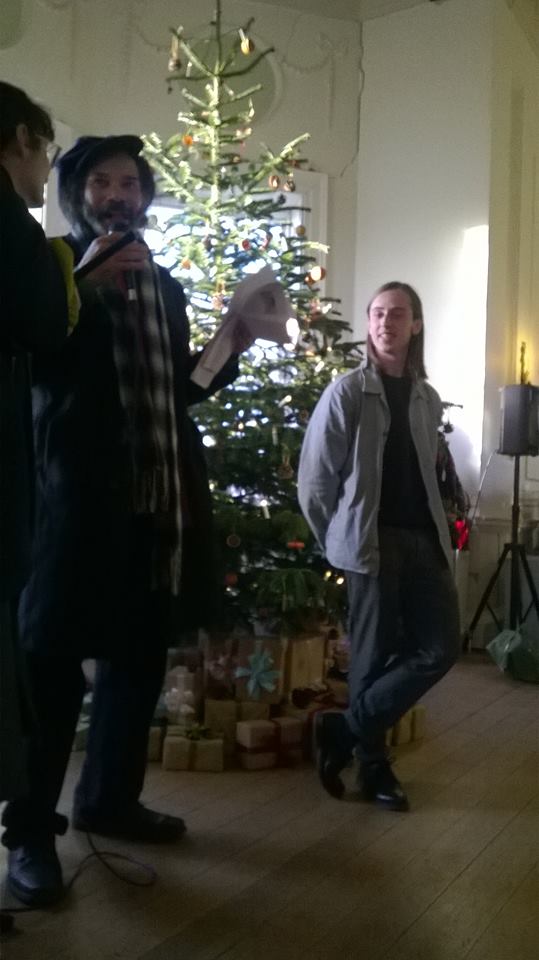 He talked about the wonder of completing it on Thursday, how it was a pile of wood before that. He shared his own influences and experiences of seeing Hew’s work and how he was looking forward to this immaculate tree house weathering.

Rachel Sharpe is eager to continue to give artists in their early years a platform to complete work like this. 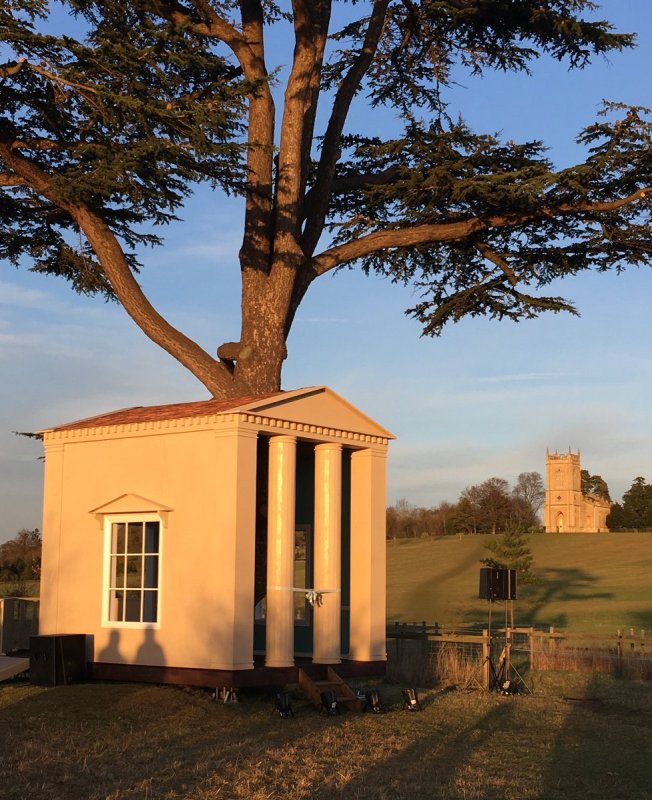 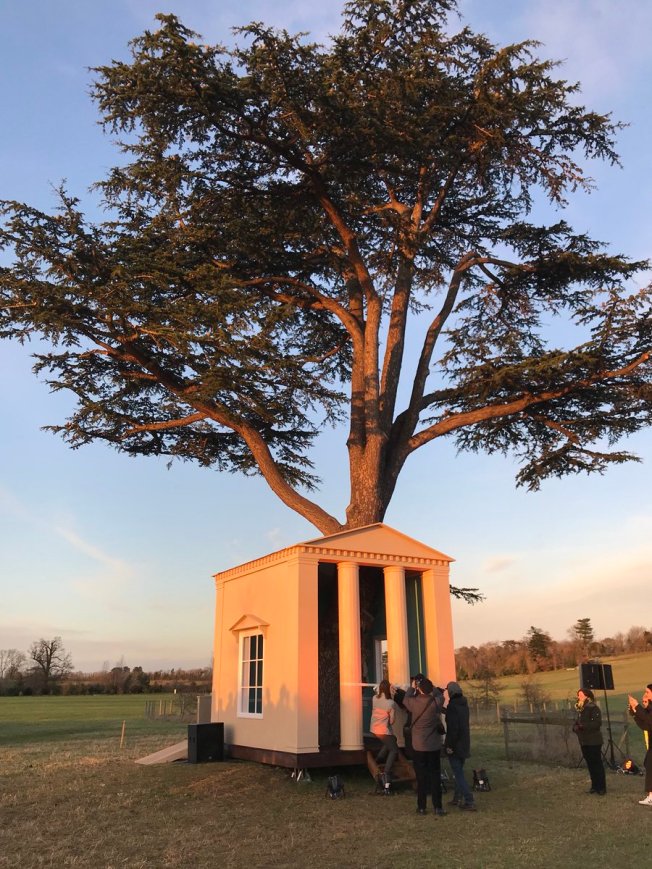 Next I caught up briefly with William Gallagher and Jonathan Davidson before heading outside for the Grand Opening of the Tree House, where I had time to catch up with Kurly and Maggie Doyle. We were waiting for it to become a little darker and from the selection of images you can see why.

Chris and Hew cut the ribbon (blue to match) and I loved seeing Chris embellish his pocket with it – visions of weddings/grooms/ important commitment and ceremonies. The artist letting go of his work to the public entered my mind. It had become a celebration, a party. Well there were 700 cupcakes still to be eaten! 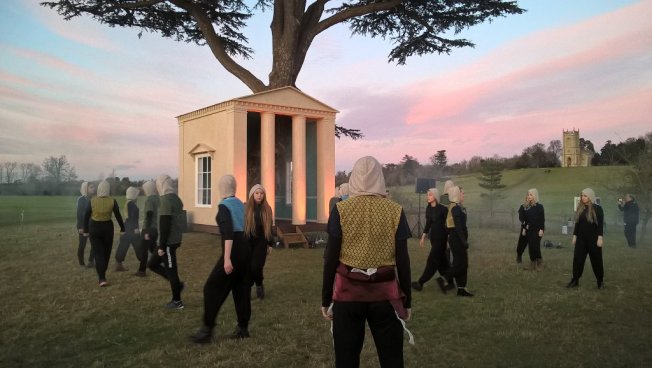 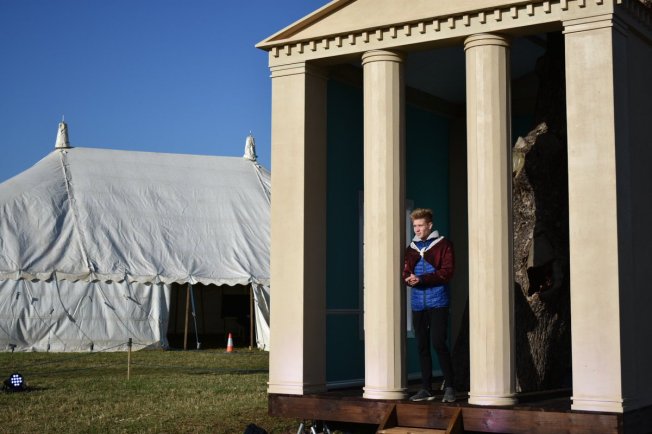 I watched an incredibly moving rendition of the dancework – with an ending which was the equivalent difference between The Clockwork Orange film vs. book. Outside the team of 25 dancers were allowed to jump and run (the Long Gallery is original NT property flooring) and the subtle variations in motives and choreography bore new meaning between Adam and this Tree (House).

I also loved the way the sky matched the lighting! 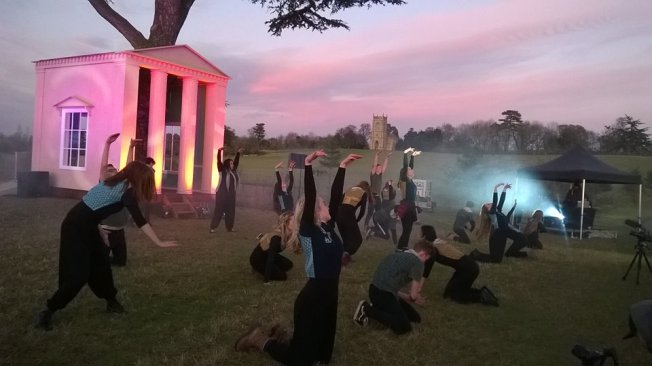 I am glad I caught up with Chris to chat about the project. You can find out about some of the work on the NT website and Chris’s own website I will share links in my next post. 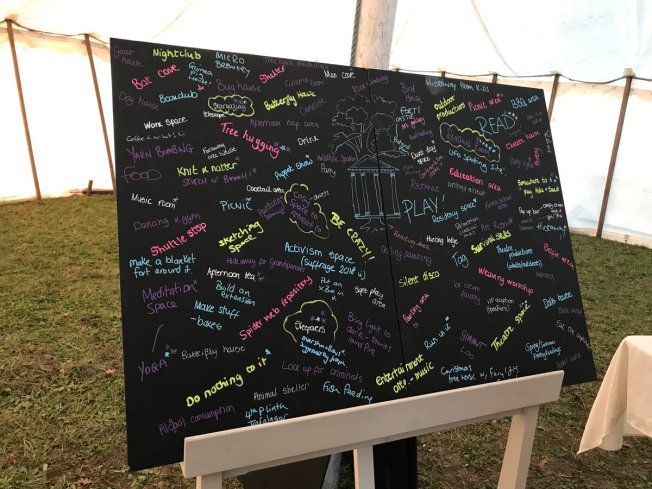 We talked about the board of ideas set up in the Marquee (in exchange for a free cupcake), I talked to him about hopes some of us have for using the space and he explained that was why there is a balcony at the back, space on the ground for seating. He envisaged it being used for performance. There is an intentional stage.

Unlike functional/childhood/traditional tree houses this is not in the tree, the tree is in it and this creates an amazing space to explore. The house contains and mirrors many of the architectural features of Croome. 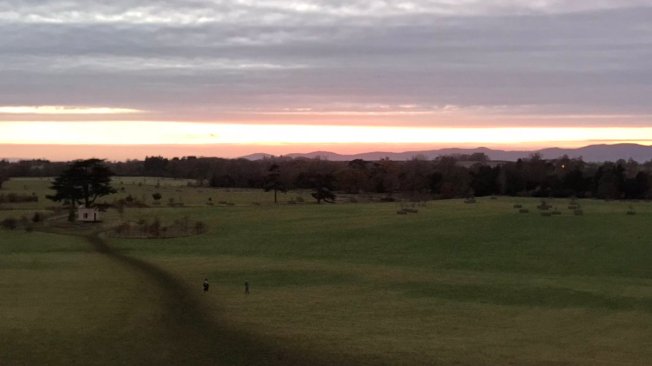 He talked to me about his design work and the exhibition downstairs. The work he had done on site. It was lovely that one of the Volunteers came to talk to him about how much she had enjoyed this art unfolding through the process. I get the feeling Chris Alton will be missed at Croome.

Once I got home, filled with adrenaline, I became curious about the process Chris had been through. So my final post on Adam Speaks will explore the work behind the Tree House, retrospectively. 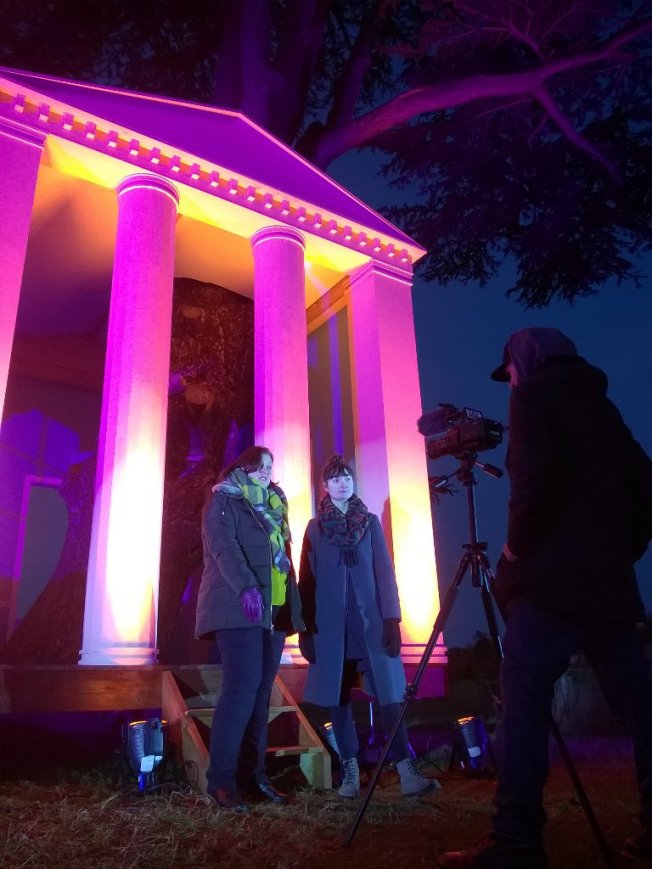