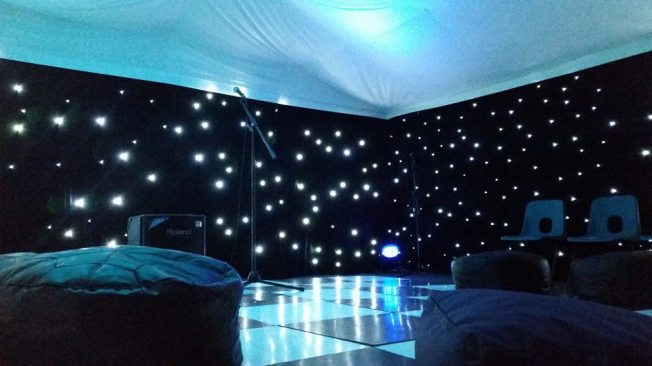 Sunday… a day of rest? Erm, NO! It was quite a sad day, we had already lost Gram Joel Davies to the dreaded Swindon Lurgy, which was caught by the whole team and some of our resident poets too and Jill Carter the Artist in Residence! Today we had to wave goodbye to Sarah L. Dixon*. We also had to steward on very little sleep and draining energy supplies. So extra holes in the heart were quick to drag us down. But we were picked up by the ever positive Hilda Sheehan in the morning meeting where we scheduled the last full day of the festival.

*I knew I was going to miss Sarah, lots. I managed to sneak a little message and a poem into her suitcase for her to find once she made it home. After having a roommate it was very strange to be in a room on my own.

This was the final day of workshops, Jacqueline Saphra had stepped up to run a workshop as Jacci Bulman was unable to make it and Rishi Dastidar was booked to facilitate a Call & Response Workshop.

10:00 to 12:00 WORKSHOP: Call and Response Sun Inn With Rishi Dastidar
We’ve all been to workshops where we’ve been inspired by other poems, maybe visual art too, and then written in response to them. So what happens when we use pop songs instead? That’s the simple premise behind ‘Call and Response’, where some great music will hopefully provide great inspiration for writing poems. Just bring some paper, pencils – and your ears.
Rishi Dastidar is a fellow of The Complete Works, a consulting editor at The Rialto magazine, a member of the Malika’s Poetry Kitchen collective. His debut collection, Ticker-tape, is published by Nine Arches Press.

It was a most enjoyable experience, music really bringing me to waking moments on this tired Sunday morning, full of thoughts of goodbyes and trying to keep a balanced heart, this workshop lifted me out of that head-space. It was fast, furious and fun and a surprising amount of poetry was created. I loved hearing everyone’s takes on the same pieces and Rishi was a fantastic workshop leader. I would not hesitate to workshop with him again!

Over at the Museum A. F. Harrold had it all under control at the Open Mic Talent Show. This was the 2nd event for children, the first took place on Thursday 5th October on the opening day of the festival, whilst we were at Artsite.

10:30 to 12:00 POETRY RHYME TIME RJ Museum Tent-Palace
You are invited to meet Custard the Dragon, The Owl and the Pussy Cat, and many more famous poetry friends. A fun and animated poetry rhyme time with music and movement for under 5’s, with arts & crafts with Suzie, and poetry.

Events for children is another great element of the Poetry Swindon Festival. Children are no strangers to the Richard Jefferies Museum programme either.

10:30 to 12:00 CHILDREN’S OPEN MIC TALENT SHOW RJ Museum Tent-Palace
With A. F. Harrold
A morning of poetry play and fun for children under 11 years, presented by Milo age 10 and A.F. Harold. With Special Guest Young Poet Sophie Daniels. Come along with a poem, a song or a story – one you have created yourself, or a favourite!
A.F. Harrold is the author of the hilarious Fizzlebert Stump series, the award-winning book The Imaginary and the children’s poetry collections I Eat Squirrels and Things You Find In A Poet’s Beard (illustrated by Chris Riddell). He is well known for his energetic and silly performances where almost anything can happen. Expect poems, jokes, beards and nonsense, and maybe a snippet of his brand new book, Greta Zargo and the Death Robots from Outer Space.

Back to the Museum for Lunch and an action packed day for the team with three Stewards down. Julia Webb had stepped up to an afternoon reading as a poet couldn’t make it and had some time to go and prepare and of course, we had lost Gram and Sarah. I think this was one of the hardest work days, but all work is fun when you are part of such a great team.

13:30 to 14:30 READINGS RJ Museum Tent-Palace
With Rishi Dastidar, Jessica Mookherjee & Camilla Nelson
Transgressions and experiments of three daring poets who tread where it doesn’t seem safe or sane, and so manage to open our eyes and ears to the real pulse of the present.
If you were unable to get to Rishi Dastidar ‘s workshop in the morning, this is your chance to hear from his debut collection, Ticker-tape.
Camilla Nelson is a language artist, researcher and collaborator. Her current work is Apples & Other Languages, published by Knives Forks and Spoons.
Jessica Mookherjee is a poet of Bengali origin. Her first collection, Darshan will be published by Cultured Llama in 2018. 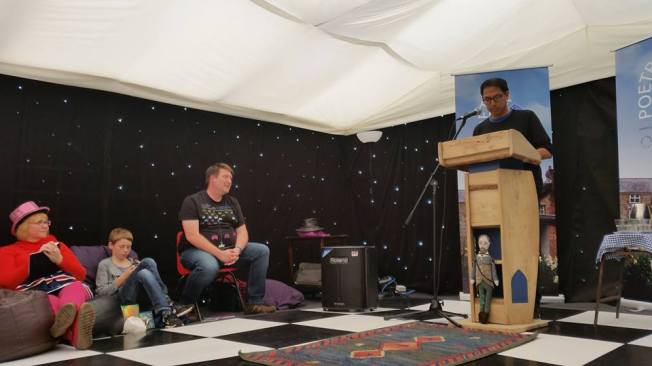 I have heard Rishi Dastidar reading at Ledbury and Waterstones Birmingham and it is always a delight to hear from this collection, Ticker-tape. Nine Arches Press were certainly well represented at this year’s festival.

In the afternoon reading I was so touched by one of Jessica Mookherjee’s poems that I completely unravelled! Which was a tricky situation to be in when there is no-one around as everyone was busy watching the event.

This is the power of poetry. 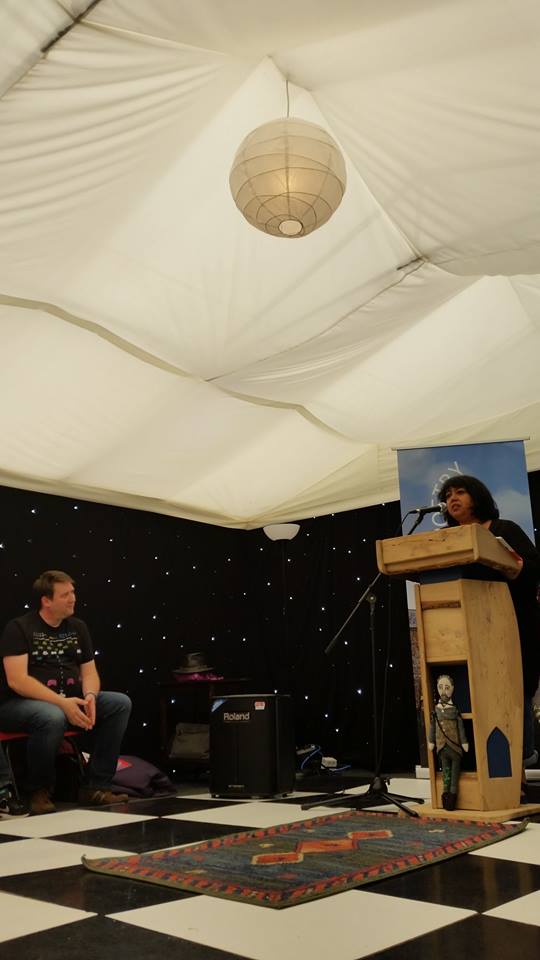 A speedy turn around for the last Open Mic event of the festival and one I could finally take part in.

15:00 to 16:00 OPEN MIC – Magic RJ Museum Tent-Palace
‘I believe reality is approximately 65% if. All rivers are full of sky. Waterfalls are in the mind. We all come from slime.’ Dean Young Can you pull a poem out of hat? Join in as poetry is conjured from every beautiful mind. With special guest readings from Kathy Gee & Liz Mills – once upon a time Kathy was a museum curator, so for quite a while she wrote about ‘stuff’ and what we leave behind. Liz has written and acted all her life but only started writing poetry last summer.

During this event many poets appeared (for the next event) and I really wanted to leave the book stall and go to catch up with them, but I was torn as it seemed rude to miss the open mic-ers and I was also waiting for a slot (names were pulled from a hat). I stayed put.

I enjoyed the ‘Magic’ open mic and this time it was the turn of Kathy Gee and Liz Mills to take the Guest Spots. It was a lively event with some beautifully magic poetry. 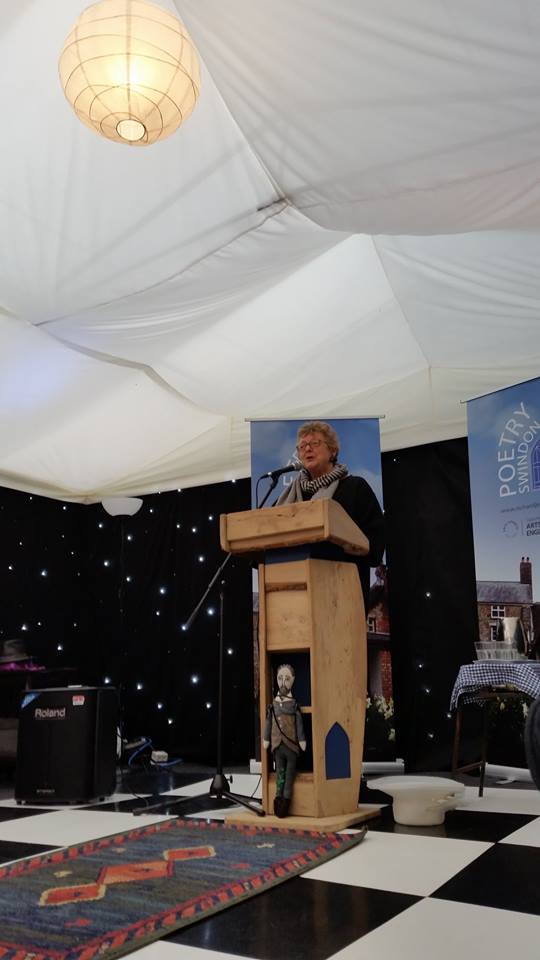 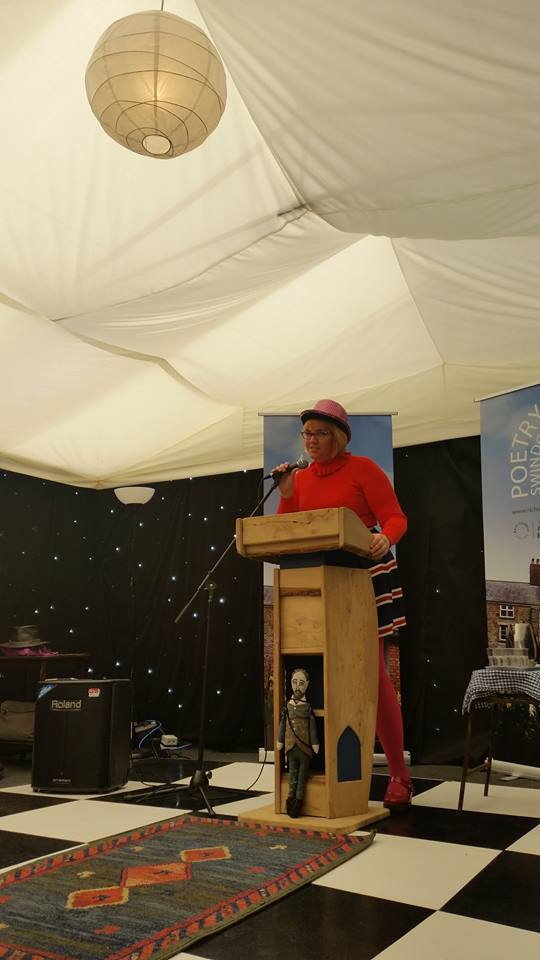 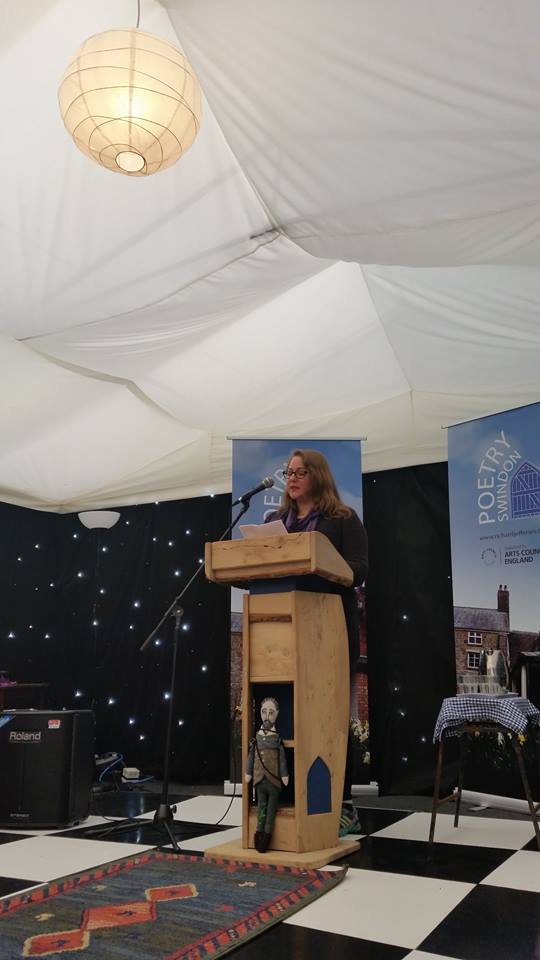 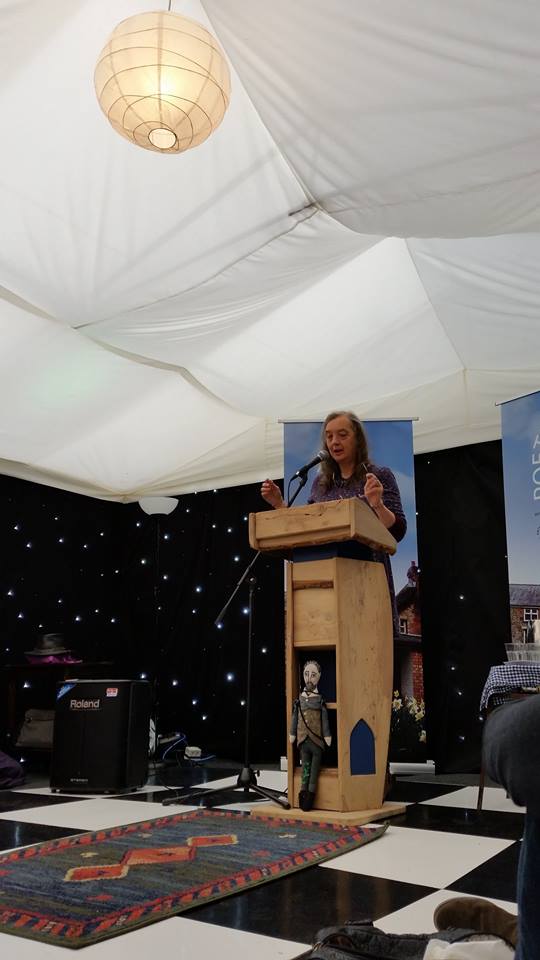 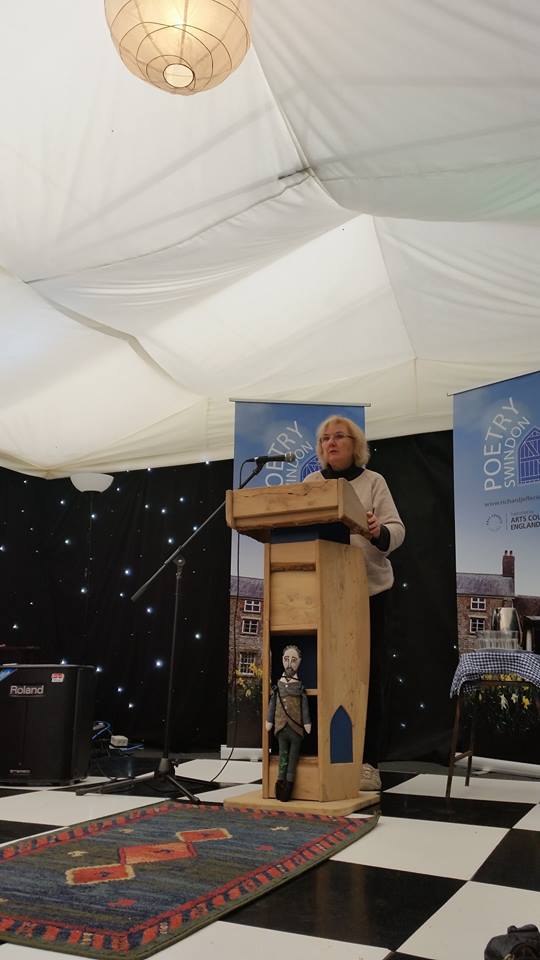 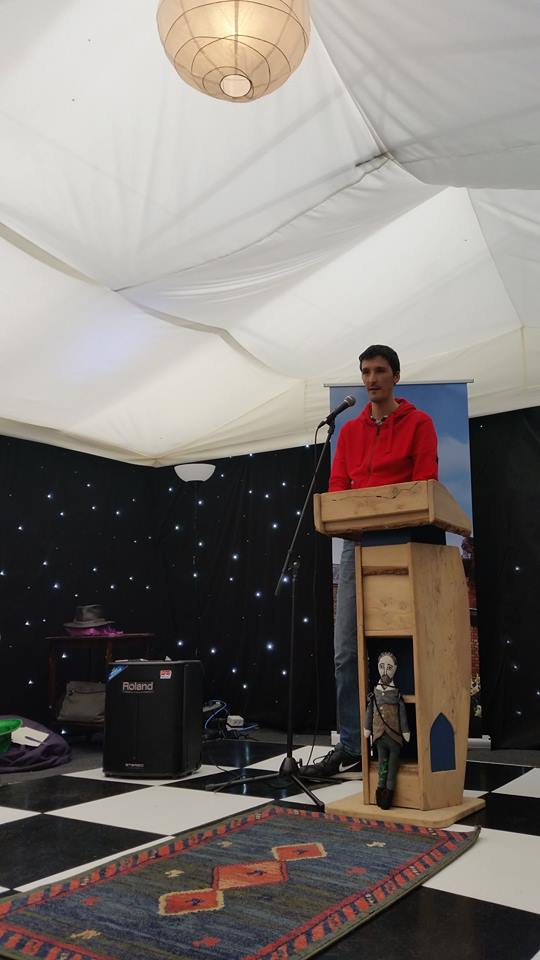 I performed one of the shortest poems in the book ‘Linger’. 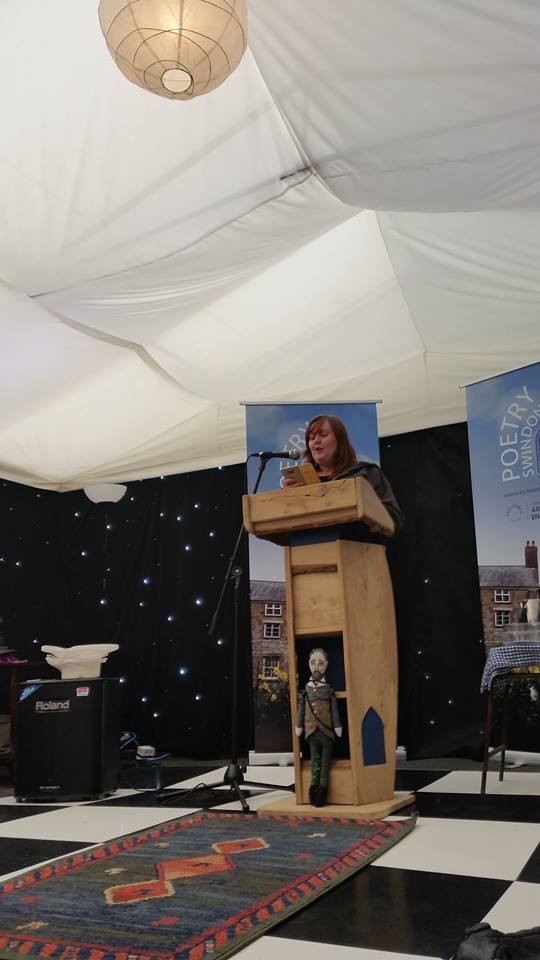 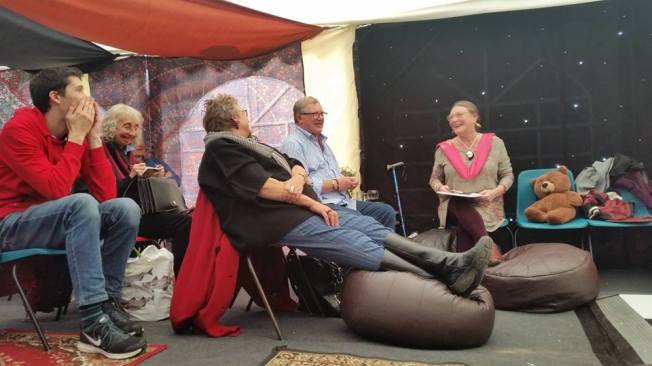 A quick stint behind the bar and then it was onto the final afternoon Readings of the festival. I was very much looking forward to seeing Daniel Sluman reading again and discovering the poetry of Alex Josephy, having met her earlier on at the Book Stall. Melissa Lee-Houghton was unable to make it so we had the delight of Julia Webb reading from her collection Bird Sisters (also Nine Arches Press).

16:30 to 17:30 READINGS RJ Museum Tent-Palace
With Melissa Lee-Houghton, Daniel Sluman & Alex Josephy
Intense and exacting reading from three of Britain’s rawest readers.
Melissa Lee-Houghton was named a Next Generation Poet 2014 for Beautiful Girls. Her latest book, Sunshine (Penned in the Margins, 2016) saw her shortlisted for the Costa Poetry Award, Ted Hughes Award and Forward Prize for Best Single Poem. Daniel Sluman is a poet and disability rights activist based in Oxfordshire. He was named one of Huffington Post’s Top 5 British Poets to Watch in 2015. His debut collection Absence has a weight of its own was released by Nine Arches Press in 2012. Alex Josephy lives in London and Italy. She has been a student and teacher of poetry all her life and leads a poetry reading group in East London. Her poems have been published widely in magazines and anthologies. 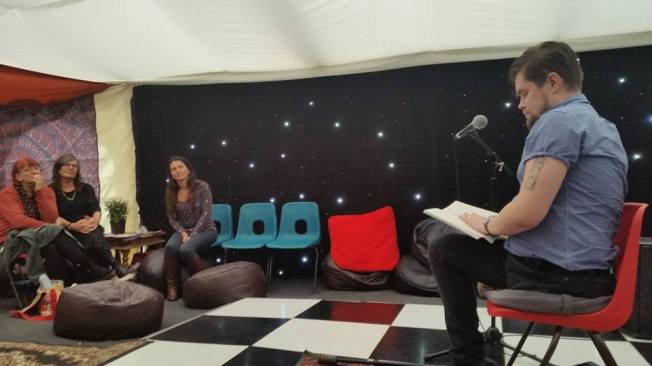 Then came the teatime rush and finally the Festival Finale… which deserves a post all to itself!

Writing to music is nothing new, I do it often, especially at social gatherings where the tunes turn me into creative mode! I recently spent a wonderful 6 days at Swindon Poetry Festival and took part in a workshop ‘Call & Response’ with Rishi Dastidar, so this is also a small nod to that.

This video is just audio of the track Lovely Day by Bill Withers so feel free to be in another window on your screen writing if you are not buried in a long hand notebook.

Press PLAY and write away. Spill your morning thoughts, don’t self-edit or stop that pen. Just keep it moving.