November is nearly halfway through. The diary is full and we are fast approaching the busy home season too.

This week events run back to back and there are some that I will sadly have to forego to make sure I keep my head above water and sleep! 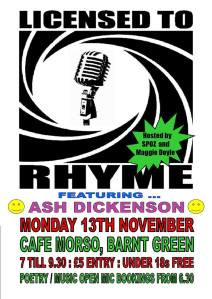 Tonight is Licensed to Rhyme with Ash Dickinson. I am delighted that a poem which was inspired by a conversation with him earlier this year, is finally ready to perform this evening. 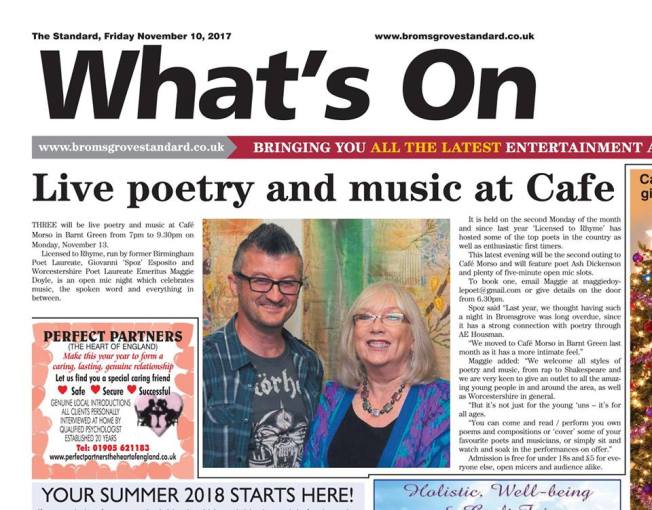 Tomorrow is the almost-conclusion* of the WPL Hanbury Hall Poetry Project. 18 poets signed up to visit Hanbury Hall over 3 weeks in October during the DAN Art Exhibition in the Long Gallery. Poets used the artworks to inspire writing. 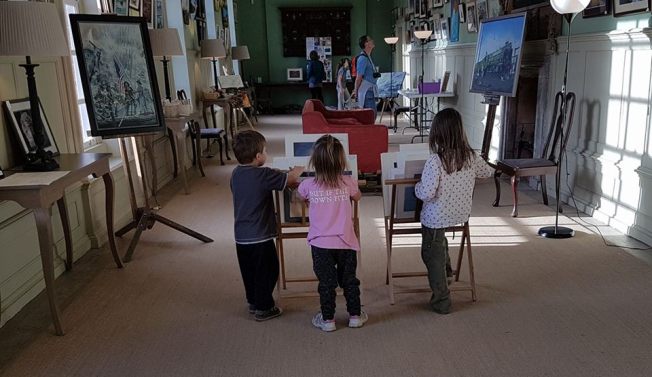 Since then Polly Stretton and I went along to the closing ceremony to share our poems. Polly’s poem ‘Curves’ won a competition to find a reader for the event judged by Peter Hawkins (Chair) and mine was slipped in as the organiser and Worcestershire Poet Laureate.

This Tuesday Parks Cafe will host 9 of the poets, our reading is accompanied by the artwork on screen and I am very grateful to Rosie Philpott for coordinating that side of the event. It is FREE and I hope many of the artists will be able to attend. 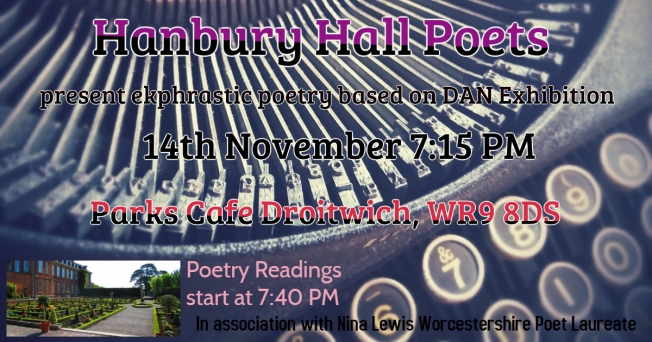 I am organising an exhibition of the poetry along with photos of the artwork that inspired them in 2018 at Hanbury Hall in the Long Gallery – which will be the eventual conclusion of this project.

Wednesday is a poetry outing – a few Worcestershire poets are heading over to Smokey Joes in Cheltenham for Poetry Cafe Refreshed. I haven’t made it back since I headlined in 2015, so well overdue a visit! 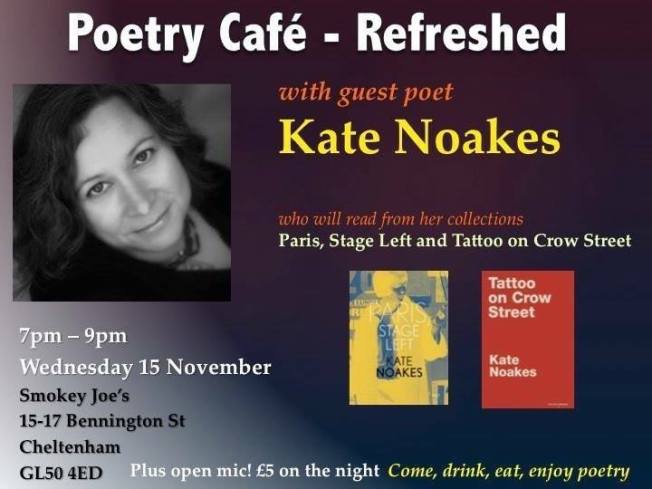 Thursday sees the 7th Anniversary of Hit The Ode – a special event taking place in Waterstones this month. I am keeping everything crossed that I have time after work to make it there. I love this event and haven’t been able to make one since they started back after the summer. They always feature National and International Headliners.

Featuring:
From London, Shadè Joseph
Shadè Joseph is a 23 year old Writer/Musician from East London.
She has been writing/performing poetry and producing, composing and accompanying musicians singer/songwriters and poets for the past four years and worked alongside the likes of London Symphony Orchestra, Ayanna Witter -Johnson
Caleb Femi, Tolu Agbelusi, Tshaka Campbell and Buddy Wakefield. When she’s not doing all of that good stuff she’s probably somewhere laughing or dancing or eating plantain chips or giving someone a hug.

From Northampton, Roger Robinson
Roger Robinson has performed worldwide and is an experienced workshop leader and lecturer on poetry. He was chosen by Decibel as one of 50 writers who have influenced the black-British writing canon. He received commissions from The National Trust, London Open House, The National Portrait Gallery, The V&A, INIVA and Theatre Royal Stratford East where he also was an associate artist.

He was shortlisted for The OCM Bocas Poetry Prize and highly commended by the Forward Poetry Prize 2013. He has toured extensively with the British Council and is a co-founder of both Spoke Lab and the international writing collective Malika’s Kitchen and is an alumni of The Complete Works. His New and Selected Poems is soon to be published on Peepal Tree Press.
He released two albums with Disrupt on every reggae lovers favourite label Jahtari in 2015 and is a founding member of King Midas Sound on Ninja Tune.

From New Zealand, Penny Ashton,
Penny Ashton is New Zealand’s own global comedienne who has been making a splash on the world stage since 2002. She has performed over 600 solo shows and has sold out from Edinburgh to Adelaide to Edmonton. She has represented both New Zealand in The World Cup of Theatresports in Germany, and Australasia in a Performance Poetry Slam Tournament Tour of the UK. She has also performed poetry by invitation at The Glastonbury Festival, her solo musical Promise and Promiscuity at The Jane Austen Festival in Bath and has reported from the Miss Universe Pageant in Las Vegas.

On Friday Jack Crowe has organised another extravaganza – I heard so many good things about the first event of this kind (February 2017) and I would like to think by Friday I may have grown wings to fly back into the city. However, looking at the schedule as I type I am having palpitations.

If you go on the back of seeing it here – let Jack know, especially if I don’t manage to get there myself, he will be happy that I sent you to the door.

Funkenteleky, in which four poets and four musicians wake up together.

*they combine live on-stage at The Edge, in a unique, one time only, funky, verby spoken potion which makes y’all do a dance in your minds.

Doing this this time shall be:

are an organ trio of critically acclaimed musicians: Dave Ferris on organ, Ben Lee on guitar, and Billy Weir on drums. The name of the band is their surnames, we notice. Expect Latin grooves, New Orleans shuffles, mind-boggling improvisation, and a set of their own inspired tunes to close the night. Don’t expect acid-skiffle space thrash, but equally don’t be surprised if it happens. For Funkenteleky the band will be joined by a player of brass, who will remain mysterious, silhouetted in these pixels, an untapped funk spring.
“I love this kind of grooving, funky organ trio music, and last night Ferris/Lee/Weir took it to new heights of originality, creativity, imagination, feel and chops.”
We can’t wait. https://billyweir.com/ferris-lee-weir/
https://www.youtube.com/watch?v=U6shj9zpF1I

is one of Birmingham’s best poets. His work scatters back and forth between the observational and the vulnerable, humorous and raw. Bearing his heart in lines of tongue twisting insight, Leon tells us stories of love and betrayal, and stories of innocence and bliss. The host of Howl, the city’s hippest poetry knees up, we’re thrilled that he’ll be treating us to a unique performance of his own work. A headliner at events such as Hit the Ode, Level Up, Grizzly Pear and more, he is a consummate performer who lives and breathes spoken word. He’s awesome, basically.
https://www.youtube.com/watch?v=dQvLIcujRkI

loves the po. She combines political commentary with small moments, using sensory imagery s k i pping with movement to depict individual and collective urban experiences. She makes the truth vivid and the vividness true. She’s done so at Verve Poetry Fest, Level UP!, Howl, Stirchley Speaks and Shanty Town and is currently focusing on building Agora Poetry, a platform for spoken word and storytelling inviting underrepresented voices into the room. Never-stop-being-curious.
Bethany Slinn- Poet https://www.youtube.com/watch?v=qddLIvHI008&t

crafts stories of his experiences in Birmingham, mixing warm humour with authentic social observation. He has honed his talents in headline slots at Howl and Stirchley Speaks. On the 25th of October he launches his new collection ‘Do What you Can’, commissioned by Punch Records, Arts Connect and the Gallery 37 Foundation. In 2016 he was part of the Hippodrome’s B-Side Hip Hop Festival, showcasing his poetic propensity for rhythm and rhyme. He’s a Brummie of whom the city is very proud, and we can’t wait for him to light up the Funkenteleky stage.
https://www.youtube.com/watch?v=leyl2zLAfYQ&list=PLHtPk-aPh1AaNJIX37Kv47sq5ALe0UBXn

is a writer, theatre maker and friendly human from Sheffield. He has performed and made work for and in Theatre Deli, Arts Depot, Camden People’s Theatre, Wardrobe Theatre, Glasgow School of Art, Flim Nite, West Yorkshire Playhouse, Bradford Poetry City, and elsewhere. Currently he’s touring a performance called The Church of Jim, after a successful month of performing it in one place, at the Edinburgh Fringe Festival. State of the Arts gave it five stars, calling it “weird, wonderful and somewhat outrageous… from terrifying and bizarre, to beautiful and hypnotic.” Andy once said ‘rimming’ in a poem on BBC Radio Sheffield. Outside of poetry, Andy is a hysterical railway signalman, and you are a glistening moon. He is a wristwatch with no strap and you are a magnifying glass, kindling a fire purely from the thoughts of winged squid scudding to the cities of humans to warn us of ourselves.
https://www.youtube.com/watch?v=G3_Nm421q7w
https://www.youtube.com/watch?v=qEuRnEJbRNI&t=2s

Saturday I will spend the morning with my Spark Young Writers Group (another reason I may not make it to Funkenteleky). In the afternoon there is a Room 204 workshop that I hope to attend.

And next week looks just as full!

My WMRN role at Rugby Library is also active with the public now. I shall be facilitating my first workshop at the end of the month. 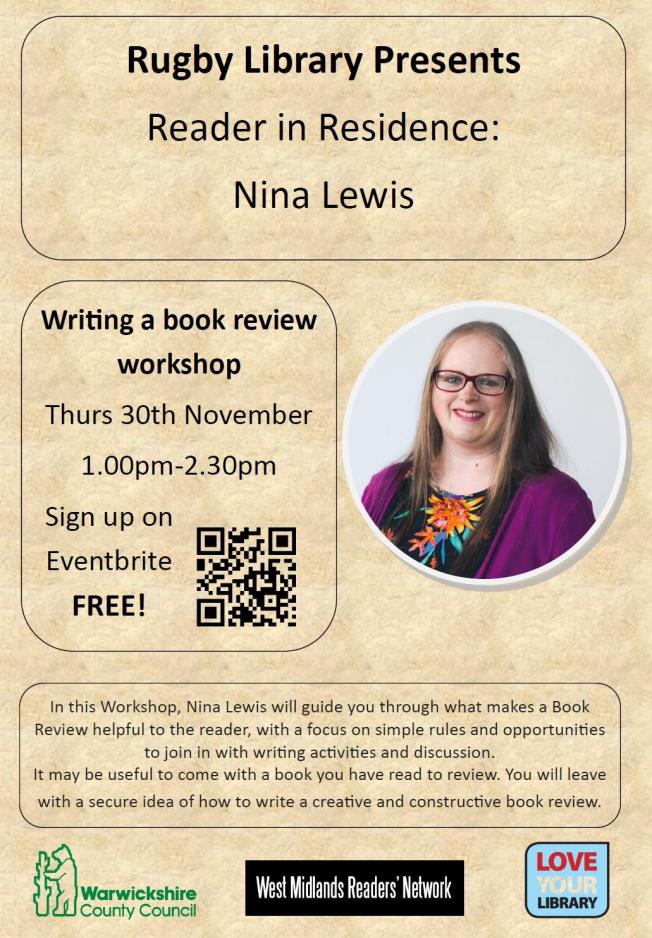 In addition to all this I am trying to secure work and focus on my own writing and submissions after submerging myself in the Poet Laureate role for the past 5 months.

There are patches of the blog which need updating. I will get to them as soon as I can. I am planning some time out from the circuit in December (fortunately it winds down a little anyway).