I have already started planning my writing for 2015 and have made the important decision to focus on the writing rather than performing poetry. This year has been great fun and I have indeed been prolific in the local and surrounding area, I have achieved what I set out to achieve and have spent a year at the mic. People know me, some of my poems are widely known, I have made lots of friends and contacts and have enjoyed sharing my work this way. I will continue to do so, but in a more realistic and balanced way. People (who didn’t know me well 12 months ago) said I wouldn’t be able to keep it up… I knew I would and I did, I have a learnt a lot by watching others and I would continue supporting all the great events if I could. However, I am going to be selective and make sure I get an annual or bi-annual appearance at these events, whilst continuing to look for unique opportunities, commissions and paid work (as I have done this year) and using the rest of my time (extra time freed up from not attending 4 events a week) to write. Plus it costs a fortune in travel – a sum I am unlikely to recoup any time soon. 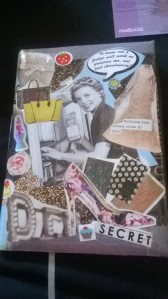 So this week – as I was busy with many projects – I thought I would give it a go and start and I am surprised how good it feels. I do miss having 3 events to attend, but it is lovely to take a back seat and I feel less stressed, which has helped create better writing space and time.

I spent the first part of the week working with the day-job, I booked Friday off as was performing in Cheltenham and I ended up having Thursday as a writing day too. I am currently working on phase 2 of the big project, I have embarked on two new projects one involving promotion and the other one something special for the New Year, I am writing & editing my Hanbury Hall/Art Network Poetry, sets for next weekend and the weekend after, some work from David Calcutt’s Wild Fire Workshop that I attended over half term in October, some work that came from the Stratford workshop with Angela France, historical research and several current submissions, as well as email/admin tasks. You can now see why I have cut events from my schedule!

I spent time reading writing articles and poetry books (I still have a bookshelf full of books I have bought in support of others over the past year) as well as writing and editing.

I started writing in the 2015 diary and planning things for the rest of the month.

I missed an Open Mic in Digbeth, Poet’s Place a the library of Birmingham and on Friday there were 4 events that clashed – Word Up, Spoken Word at the Ort and Confab Cabaret.

Having a 9 day break from performing meant that I was ready for my set at Cheltenham on Friday. It was a great night. Sarah L Dixon a.k.a The Quiet Compere spends most of her year organising events around the North and Midlands areas of the country, she is now expanding events up and down the Country. I met her earlier when Sarah James, Jenny Hope, Ruth Stacey and others performed at the Birmingham Quiet Compere Tour.

Back in the Spring I was asked to be one of the poets on the 2015 Tour on the 10th July at The Hive in Worcester.

In Cheltenham they have an annual conference called Medicine Unboxed conference and Sarah L Dixon runs an open mic for this weekend, so it had a medical theme. I wrote my poems a few months ago, they went down well, people particularly responded to Moth Face and Dodgy Stomach. It was a great night with varied performances, subject matter and lots of ’52’ Poets.

The line up for the evening; 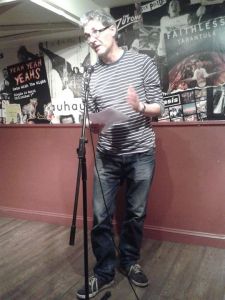 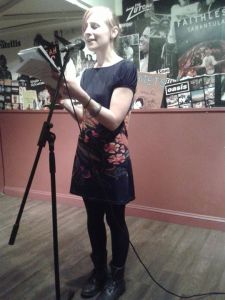 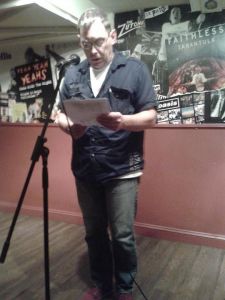 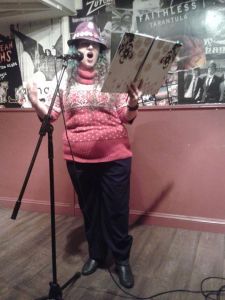 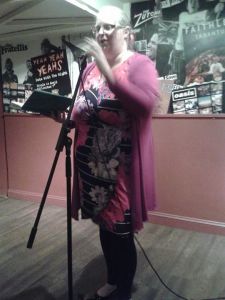 Since then I have been busy finalising my Hanbury Hall Poems which have now been sent to the Droitwich Arts Network, fingers crossed they will be used somehow. I wrote 6 poems on the first picture – recognised instantly as Paris. ‘April in Paris’ By Sue Black. I also wrote 4 poems inspired by ‘Beach Slut’ by Wendy Swann. I wrote about several of the other pictures too, in the end I just submitted two poems; ‘Not Yet Home’ & ‘Little Blue Hut’.

By the end of the weekend I hope to finish my Wild Fire Poetry and some other work too.