20:00 ‘til late FESTIVAL FINALE RJ Museum Tent-Palace
With Mab Jones, A. F. Harrold, Edward Day, Inua Elams, and George Fell.
Tonight we celebrate the power of poetry in performance with some of Britain’s most exciting voices coming together, with fantastic music to polish everything off. Prepare to be dazzled!
Rather than the creator of Death Robots from Outer Space, expect the A. F. Harrold who started in a Blackwell’s bookshop in the late 1990s, before going on to becoming a full-time poet and workshop facilitator in the early 2000s.
Edward Day is a genderfluid poet and theatre maker. Performing in a wild, theatrical style, Edward reimagines daily life in many fantastical ways, from having the powers of a Jedi, to food growing knots inside him.
Mab Jones’ newest collection, Take your experience and peel it, is published by Indigo Dreams. Her first collection, Poor Queen, was published by Burning Eye Books. “Her best poems take my breath away.” – Gwyneth Lewis
Born in Nigeria, Inua Ellams is a cross art form practitioner, a poet, playwright & performer, graphic artist & designer and founder of the Midnight Run – an international, arts-filled, night-time, playful, urban, walking experience.
George Fell has been mesmerizing UK audiences with his instrumentals and arrangements for
almost a decade, originally developing his technique from early Blues and Country recordings,
and the guitar as a solo instrument. 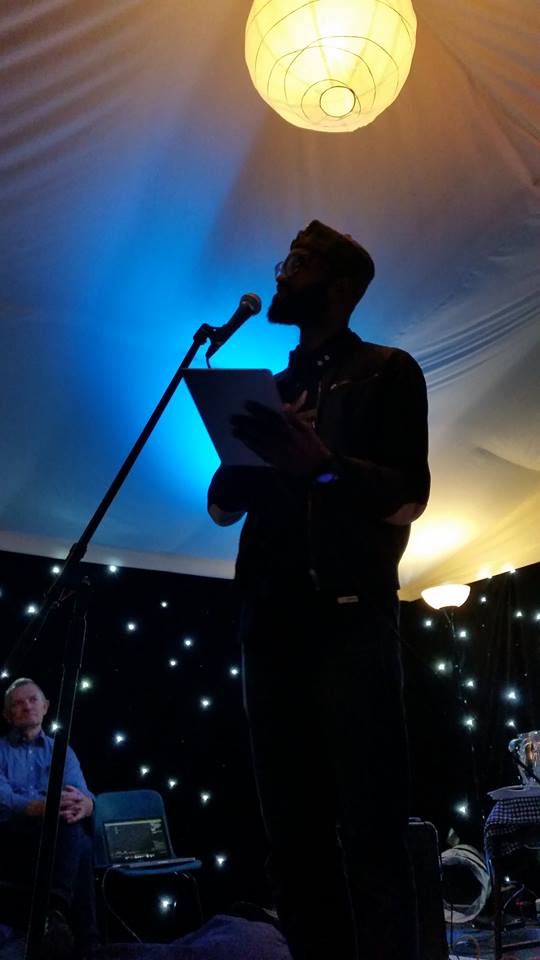 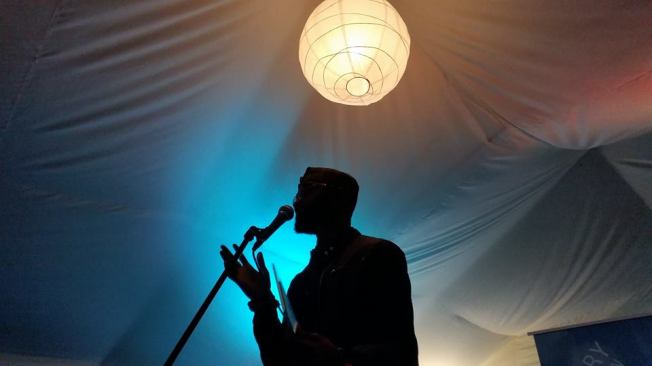 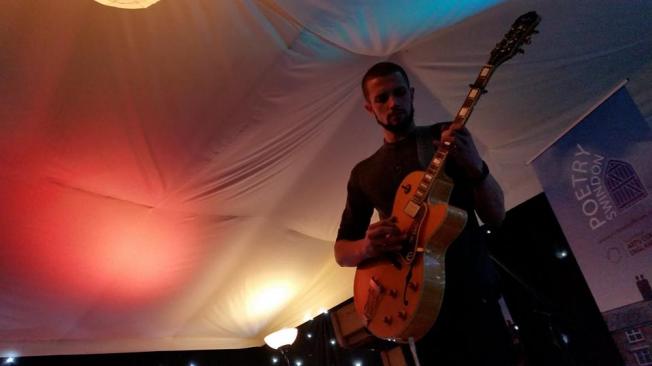 I have had the pleasure of watching A. F. Harrold in action before, many years ago when he headlined SpeakEasy in Worcester. I enjoyed his performance immensely.

George Fell is an exceptionally talented musician and it was wonderful to have his set peppered between the poets. I have really enjoyed music being a part of the festival this year.

Mab Jones I first saw in Birmingham, reading from her Indigo Dreams publication ‘Take Your Experience and Peel It’. I was looking forward to watching her perform again after seeing her around the festival for a few days. I enjoyed her performance poetry too. (Like me, she has a foot in both camps.)

Edward Day discovered Poetry Swindon last year and that is where we met. Since then Edward has developed a Touring Show based on Shakespeare and Gaming, it was an excerpt from this the audience were treated too. Very impressive.

Inua Elams I first saw earlier this year in Birmingham and he delivered the same clever poetry – using his document list to find poems on themes chosen by the audience.

It was a fabulous finale.

It didn’t end there, we also had the end of festival speeches and celebrations. 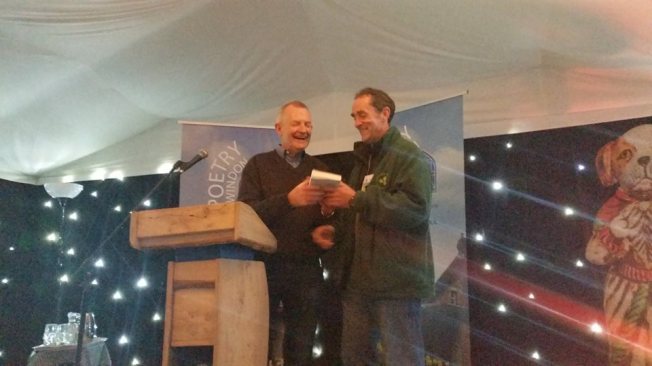 Maurice Spillane and Mike Pringle, two of the masters behind the festival and mentors of bread cutting and festival prep, invited the team on stage and spoke highly of Hilda Sheehan for curating another amazing Poetry Swindon. 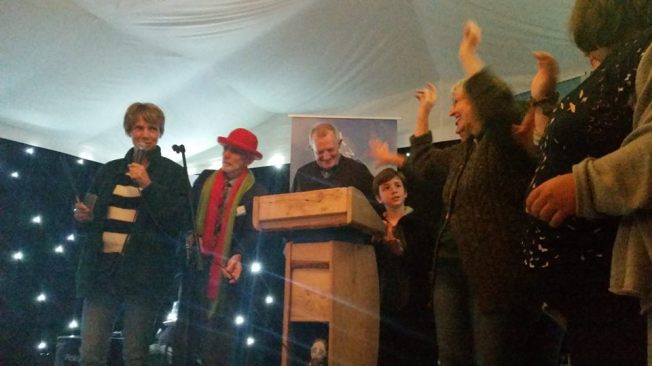 They announced the Firework display and gave a sparky foresight into what was to come.

The Finale was billed ’til Late and it was! Toast-gate also occurred-  the table was emptied during the interval, so we had to restock the toast station for hungry festival goers, which meant an impromptu bread carving lesson from Mr Mike Pringle.

The Bar had another late opening too – which is going to guarantee poets staying to mingle and on top of all that there was a firework display!

The team had reckoned an end of Festival Party, however – due to the series of late nights and people needing sleep, we ended up with no wrap party. This was fine as we had a party to end all parties the night before with Sarah L. Dixon and we had just had the most incredible Fireworks party thanks to Mike Pringle and Tony Hillier, who themselves choreographed a dance in High Vis jackets and bright lamps that rivalled the fireworks display. In fact I suggested for next year they may want to work on this act!