What better way to spend the weekend than at a poetry festival. Full of energy (and hash browns), I was ready in green for another day in the Tent Palace and Richard Jefferies Museum.

Just like Friday, Saturday kicked off with poetry workshops (after morning meetings for the team).

10:00 to 12:00 WORKSHOP: Blurred Boundaries RJ Museum Tent-Palace
With Tania Hershman
Some poems are also fictions; some stories are also poems. Where does one end and the other begin? We will take a wander through this fuzzy territory, from poem to short story and the weird and wonderful in between.

10:00 to 12:00 WORKSHOP: Being ‘Political’ Holiday Inn
With Daljit Nagra
Some poems can hit you over the head with their political rage, or they can try to persuade you to their vision as the best way ahead. Explore with Daljit some ways in which poetry can deal with contemporary issues but with complexity and subtlety. Participants should expect to have tried to write their own poems of witness in the session.

Knowing it would stretch me – I opted for a 2nd workshop with Daljit Nagra. Another action packed session and more potential poems scribbled in my notebook. A whole sequence on Education materialised.

Then it was back to the Museum for Lunch before the first afternoon event, another open mic, this time with the theme of Happiness and guest spots from Marilyn Hammick and John Mills.

13:00 to 14:00 OPEN MIC: Happiness RJ Museum Tent-Palace
‘Oh god it’s wonderful to get out of bed, drink too much coffee…and love you so much.’ Frank O’Hara
This open mic aims to have everyone leaving the tent palace with a smile on their face. Bring us your joys and your gleefulness. Feel like the sun is shining, even if it’s raining! With special guest readings from Marilyn Hammick & John Mills.

14:30 to 15:30 POETS & PUBLISHERS RJ Museum Tent-Palace
Discussions led by poet Carrie Etter with two prominent poetry editors, Amy Wack and Mary Jean Chan. Come and join a discussion about what it takes to get published.
Carrie Etter is a Reader in Creative Writing at Bath Spa University. Her most recent collection, Imagined Sons (Seren, 2014), was shortlisted for the Ted Hughes Award in New Work in Poetry by The Poetry Society.
Since 1990, American expatriate Amy Wack has edited Seren Books’ multi-prizewinning poetry list. Her own poems have appeared in various journals, most recently a 12-part poem inspired by feral cats in Spain in Long Poem Magazine.
Mary Jean Chan, from Hong Kong, is shortlisted for the 2017 Forward Prize for Best Single Poem and is Co-Editor at Oxford Poetry. Her work has been published in The Poetry Review, Ambit, The Rialto, The London Magazine, Callaloo Journal.

This was a truly insightful event to attend and some interesting questions were answered.

16:00 to 17:00 MAD & GLOW RJ Museum Tent-Palace
Mad & Glow are Jacqueline Saphra and Tania Hershman, but they refuse to tell who is who. However, they do promise to entertain you with brazen stories in poem and prose from each and both; a confederacy of words from a world that contains mad mothers and glowing jellyfish, kisses and war, salt, light and a few waterlilies.

This was an interesting event which will appear again next February at the Verve Festival of Poetry & Spoken Word in Birmingham. I feel a little honoured to have been part of the first outing and had a jam sandwich to boot!

Another thing I love about Poetry Swindon is the action on feedback. Last year the only thing missing was somewhere to sit. So they created the bar area for refreshments outside, plenty of picnic tables, relocated the Tent Palace and the old tea room/book shop became a whole room to chill out in, with gingham tablecloths littered with poetry magazines. Sarah and I dip into some our poems made it into and some they didn’t.

19:00 to 21:00 BATTERED MOONS RJ Museum Tent-Palace
With Malika Booker
Battered Moons 2017 will be celebrating seven winning poets and their poems, with dazzling poet Malika Booker handing out the prizes and reading from her own work. Malika is a Douglas Caster Cultural Fellow at the University of Leeds and chair of the Forward Prizes for Poetry 2016. Her Malika’s Poetry Kitchen has inspired models from Delhi to Chicago.
The evening will include a musical treat brought by the outstanding voice of Caitlin Eastham and her band. 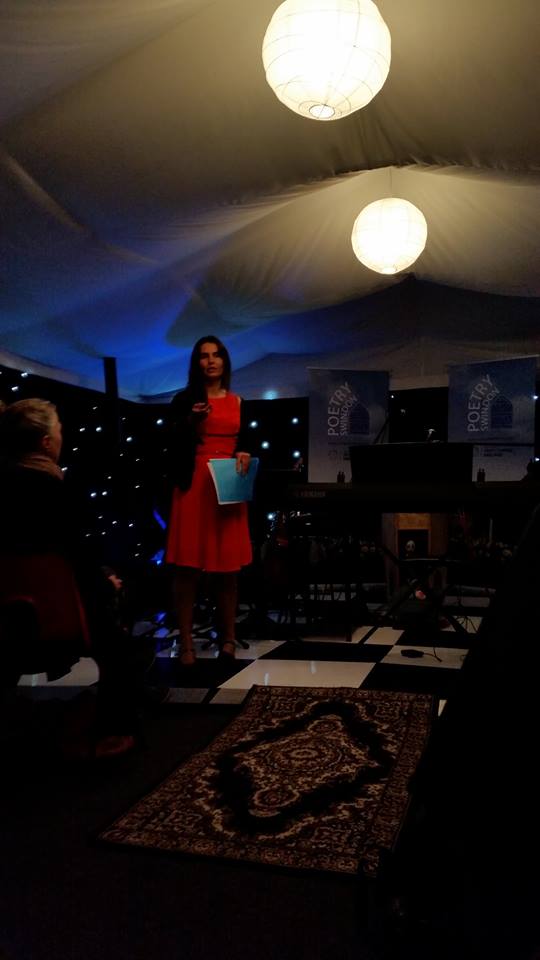 A spectacular event (to almost round off the evening) with music, winning poems and Malika Booker (who I first discovered at Ledbury Poetry Festival this year), a woman with a heart as big as Poetry Swindon. It was lovely managing a quick chat with her later in the evening. 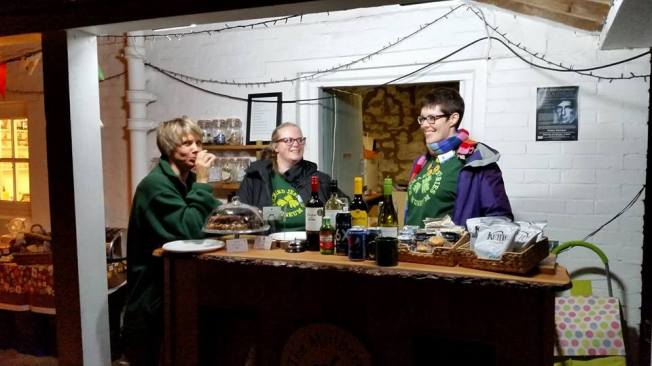 The final event of the evening was a musical one, much acclaimed and my late night bar duty.

21:30 ‘til late LATE NIGHT TOAST SPECIAL RJ Museum Tent-Palace
Keith James in concert – The Songs of Leonard Cohen
With a lifetime reputation of performing and an undying love of the ‘pure song’ Keith James gives you a concert of Cohen’s amazing material in the most intimate and sensitive way imaginable, exposing the solitary inner strength of his greatest songs in their original perfect form.
‘Some of the most atmospheric and emotive music you will ever hear.’
The Independent.

You can catch Keith James here.

This event was thoroughly enjoyed by all in The Tent Palace of Delicious Air and those of us outside it. *

After a late night bar, we finished late… later than the night before. The Late Night Special finished later than any other event on the schedule, the start scheduled at the time most events finished. Then there was the bar… then after the last festival goers had gone to bed… the team celebrated Sarah L. Dixon’s pre-Birthday, Birthday! Somewhat of a new tradition having managed to have her big, special birthday on her final day in Swindon last year. There was cake and beer.

*This year… Sarah started the celebrations before Battered Moons Event…

Tony Hillier loves any excuse to dance, after we all went to bed on Friday, he went out clubbing… so two late nights in a row for this man who could teach us all a thing or two about partying!

By the time Keith James took to the stage there was a competing house party in the Museum! And like all good parties it happened in the kitchen, no. The bathroom! Pizza had been ordered and merriment was on the agenda. 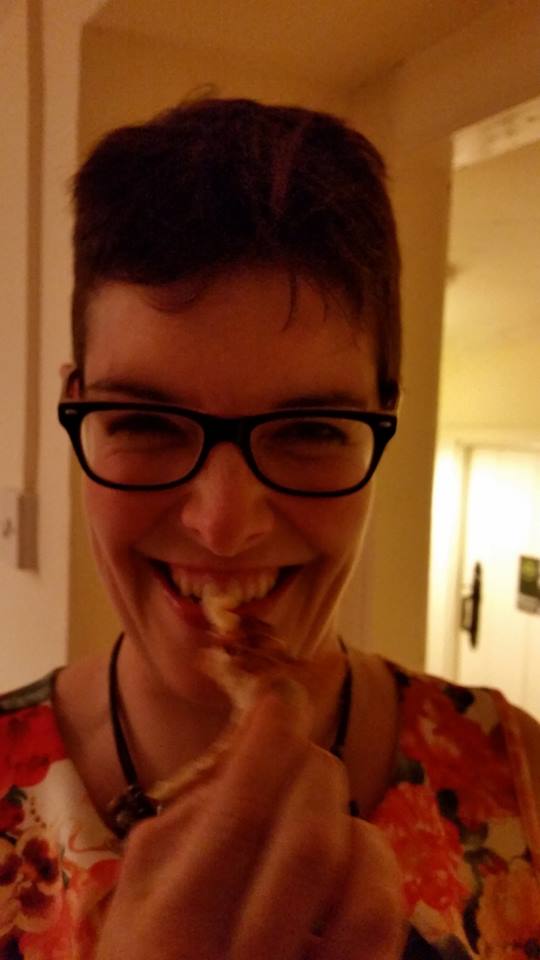 I had been outside manning the bar, but realising the games were afoot inside and attempting to go and soundproof the venue, I discovered the epicentre of the party on the landing and you know, these are once in a lifetime moments (like sharing barn hammocks with Angela France and Jo Bell in 2014). 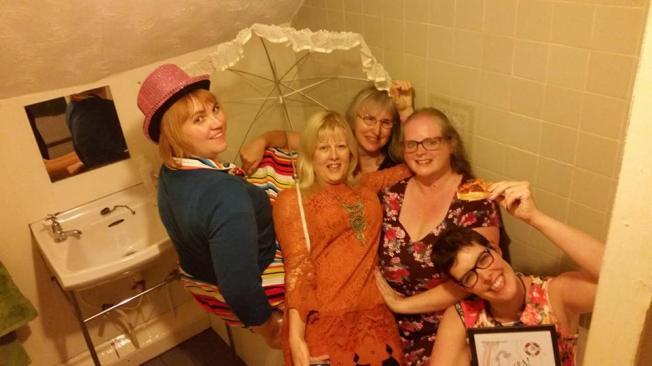 At the officially organised pre-birthday/last night party there was a dance floor, a special mix tape that Hilda had compiled, the Swindon Dog, Poetry Pram balloons and plenty of dancing feet. It was a marvellous, strange, fun night. One that finished just 5 hours before we had to be up again. Sarah herself was having to leave the next day, which had to be an easier exit than workshops, events and stewarding… something to bear in mind when the Dancing Queen pulls this again! 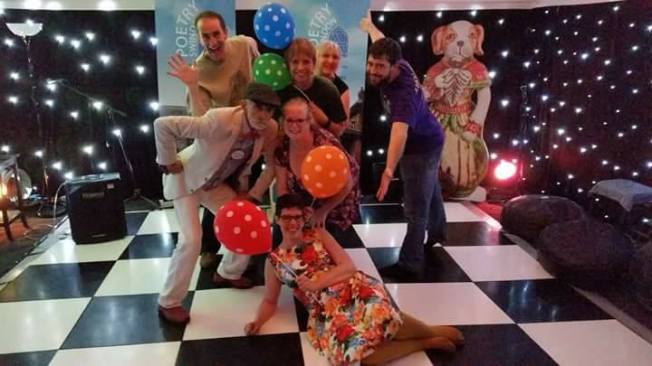 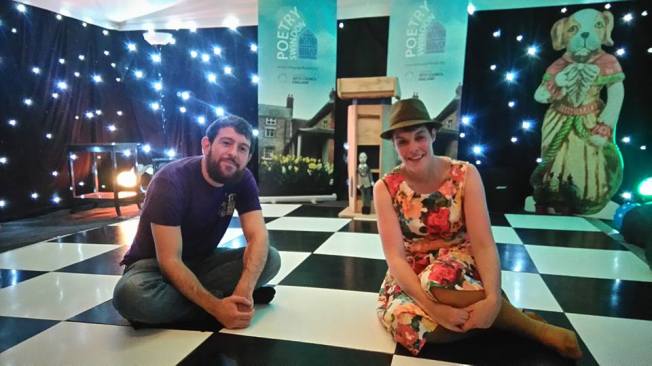 When a party starts after Midnight… we eventually made it to bed with a few hours to sleep before morning alarms! 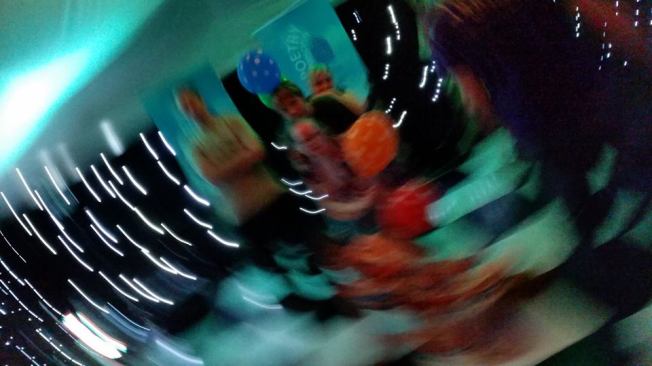