In the past quarter there has been an influx of new talent in the city, young, talented and ambitious poets have taken a bite of the poetry scene, chewed it and decided they can also provide a delicious event for the rest of the city to chow down on… and they are not frightened to get everyone involved either, driven by spirit and desire over three new events have practically popped up overnight (of course, this isn’t true, beneath the tip of the iceberg (success) lies all the hard work and decision making)!

This post started out as a review of the Launch of Rhyme With Reason – Nicole Murphy’s new night of Spoken Word, in composing the opening paragraph I realised how much new poetry (events and performers) have sprung up in 2015 and how many of us get the opportunity to share with a new audience because of it.

So in case you are not from this wonderful middleland let me share with you the new gems and masters!

HOWL – Leon Priestnall – The Sun at The Station – Kingsheath

I met Leon in 2014 at Word Up, where he came and supported the acts and shared waffles and drinks with the poets. I remember talking to him about writing the first and second times our paths crossed. For a while he was a poet who didn’t perform (at least not at the events I saw him attend) and he was even existing without social media because I remember one of his first poetry videos doing the rounds in an experiment of exposure over social networking.

Anyway long story short he is a fine performance poet who has filled many Guest Spots this year all over the city and has also started his very own eclectically brilliant, beat inspired, spoken word night. The Sun at The Station first made it onto my radar with there UNPLUGGED nights every Sunday and although I saw lots of the Birmingham poets performing I thought it was primarily a music event and I am never sure how well my poetry stands on those stages, I have in the past – but I feel this time my writing has changed.

It wasn’t long before Leon had the venue pegged and created his own night HOWL Feat – which (due to other commitments) I wasn’t able to make in the early days. I have made it to two events, both superb and am Headlining along with others in August.

Leon Priestnall is a poet, writer and performer based in the West Midlands. Leon’s work battles back and forth between the personal and the observational, the angsty and the humorous but is always accessible. Leon has performed at various venues around the Midlands ranging from music events to burlesque. He was a runner up in the 2007 Spiel Unlimited Solihull Poetry Slam and has released two spoken word EPs in collaboration with musician Dan Hartland. He now runs spoken word night Howl at the Sun at the Station, Kings Heath.

Jess Davies, who I first met through the 52 Project 2014 kicked new life off by discovering a pocket of Birmingham starved of words and brought Stirchley Speaks to the P Café. I was delighted to be at the launch night in May, missed June as I was away on holiday and am performing there in August.

Jess Davies is a Midlands based artist who dabbles in both the contemporary arts Scene and the Poetry scene. She was recently commissioned to write a poem for the museums at night tour at the local pen museum. Her writing is personal, heart wrenching, observational, heart wrenching, surreal and humorous. She currently runs Stirchley Speaks at the P Cafe in Stirchley. 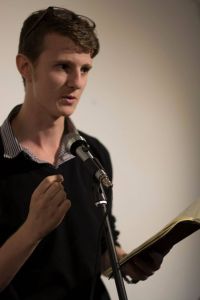 I was on holiday and missed the launch of this event, I have heard good things and it is one for the future diary!

https://www.youtube.com/watch?v=QfHbUmoPYic
Frankie Ryan is a poet, photographer and spoken word artist. He has performed regularly around the Birmingham scene. His first published piece ‘freedom lament’ launched the Birmingham book club section in Nubi Magazine back in may. July 3rd will see the launch of his own spoken word night ‘loud mouth’ and his first poetry collection ‘beyond your line of sight’ will be available later this year.

Nicole Murphy’s new night was my initial reason for this post, the launch night was phenomenally well attended and the performers came from as far as Bristol, the audience was a great mix – so many new faces to us all, which is what we hope with poetry events really – that Spoken Word filters out and gets reborn. It certainly did on Monday 6th July!

It was a fantastic night including free cake and raffle tickets (for a Waterstones gift card), great performers and a brilliant venue. It was the start of a busy run of events for me and it was a great start, I left pumped full of adrenaline and was pleased to have met and watched Hannah Teasdale in action, as she headlined Word Up the same night I was performing for the first time in London – I am back there this summer, at the Poetry Café no less!

RWR started on the back foot, I had a particularly tiring day at work, arrived flustered and late in the city, had to park further away than I wanted to – but within minutes of the night kicking off I was there, back in my body and mind and enjoying life. A great first night!

Up and coming poet from Walsall. Her poetry combines humour and powerful emotion. She has been a regular on the Birmingham scene for a while now but has recently started her own night ‘Rhyme with Reason’.

I have been lucky enough to have seen ALL these wonderful fresh blood poets perform around the city and I have tried to make it to the opening night to support them. I missed one launch (sorry Frankie Ryan) as I was on holiday. I hope to make it to more of these events n the future!