National Poetry Day is a great day for poets. There are always plenty of things to get involved with. Every year I get ‘Christmas excitement’ when I find out all the wonderful things that people have been up to and social media is flooded with poets sharing their events, stories and of course, these wonderful posters.

This year my preparation for NPD started in the summer when Heather Wastie, Worcestershire’s Poet Laureate approached Suz Winspear and myself (as runners up of the PL competition) to work on a special commission. Part of Heather’s remit for winning PL was to organise a NPD event and she did a wonderful job, it was a great evening of celebration and poetry.

Suz and I met Heather at the Carpet Museum in Kidderminster (where Heather had been a Poet in Residence) and she talked us through the vision for ‘Light & Shade’. We had an opportunity for research (I had already visited the museum on August 15th to research for the NPD WLF (Worcester LitFest) competition, which was also organised by Heather as part of the NPD event.

Then Suz and I went away with our remits and worked on crafting a poem each. The next rehearsal we discussed how to blend these into a performance. Heather had organised readings before and after this element and was clear she wanted it to be theatrical/dramatic, a little different – as it was billed as ‘a touch of theatre’. We all worked well together and soon crafted a performance, dividing the poems as you would a script and working on the character of the piece.

Heather was so happy with it that she decided we wouldn’t need another run through until the 8th October.

On NPD I was forced to do the day job and infiltrated as much poetry as possible and Heather herself was drastically busy promoting poetry in person and on the radio, whizzing from one event to another. So there was a frazzled energy about us to begin with. The staff had set the venue up and were organised and ‘swanlike’ – they had had a busy day ‘one of those days’ as well, you would never have guessed. They busily got our event ready as well as hosting a regular group downstairs.

Suz and I rehearsed and took some last minute directorial advice from Heather and then drooled over the refreshment buffet and got ready.

Costume wise we had decided to represent Light (morning) and Dark (shade/night) by wearing white and black, this may not have been picked up by the audience, it was a good idea as it made us feel a little in character. Especially as Suz is famous for her wonderfully high, wedged, gothic black boots and had the most pretty kitten heels on. (This is why Liam took a photo of her feet).

The museum took photographs throughout the night and I hope to be able to share some in the future.

Heather shared some of her poems from her new book, ‘Weaving Yarns’ – launching in November published by Black Pear Press.

Then came the NPD competition poets, Charley Barnes, who won the people’s vote online from the four shortlisted poems, mine was also shortlisted. Her prize was a poetry book, Todd Swift (Eyewear Publishing) generously provided books for the winners.

Then the finalists Brian Comber, Jenny Shaw & Claire Walker performed their NPD poems, which were a delight to hear.

Next the audience made their way upstairs to an area not usually open to the public where you can look down on the looms and machines.

Then it was our turn to perform Reading Threads and Carpet Days and Nights. The audience enjoyed the experience of our performance and we hope to repeat it again next year at one of Heather’s events. It seemed a shame to do all that work for just one performance and other people want to see it – so hopefully those busy poets who were elsewhere on NPD will get a chance to see it in 2016.

After the interval (in which many great conversations were had, but no Lemon slices were left) we returned back downstairs to the gift shop to hear the winner of the competition announced and Maggie Doyle (Poet Laureate Emeritus) and Chloe Clarke (Young Poet Laureate) performed sets, the night was drawn to a close by more poems from Heather.

The winner of the NPD Competition was Claire Walker, who won free entry for a YEAR to SpeakEasy & Mouth & Music, a poetry book and I believe free entry to 2016/17 Poet Laureate competition, where she will be a firm favourite. 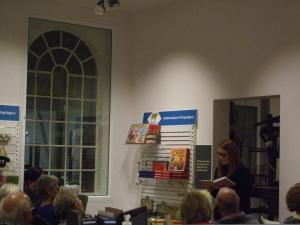 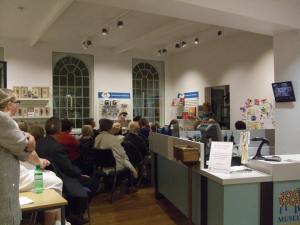 It was a wonderful evening and I was filled with Poetry happiness.

I love celebrating National Poetry Day and always enjoy reading how other people have spent theirs. Today is the first day of Birmingham Literature Festival, I booked my tickets when they were released in the summer, which means as I have already paid, it feels free.

Charley Barnes – Greener On The Other Square

Jenny Shaw – The Colour Of The Wind

It is going to be a great night of poetry.

I also LOVE this posters for NPD 2015 – Save and share 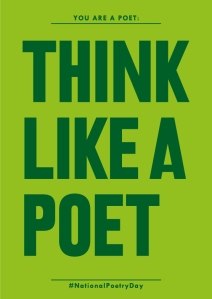 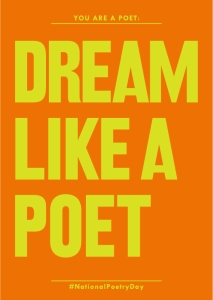 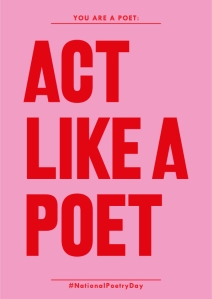 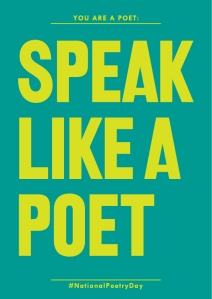 ENJOY and don’t forget to tell us how you are spending yours. 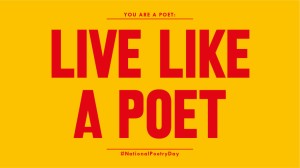 Some time ago (in secret) I was asked to take part in a performance for National Poetry Day. This year’s Poet Laureate for Worcestershire is Heather Wastie and as runner up poets, she invited both myself and Suz Winspear to take part. WLF say that there are opportunities even if you don’t win and I think this is ours. I was delighted to accept.

Heather was the Poet in Residence at the Carpet Museum in Kidderminster (traditional trade in the town), an industry, like many that has left empty mills and legacy across the 21st century streets. Heather was also one of the three guest writers for last year’s INKSPILL (our very own online writing retreat).

Light and Shade is taking place in the carpet museum in conjunction with Worcester LITFEST.

There was a poetry competition (closed 6th September), the 3 winners have been chosen and voting is open for a 4th poet. You can vote for free on a one click POLL here.

VOTING closes on the 1st October.

In preparation for entering this competition there was a special open day at the Carpet Museum, which is an amazing place and so much more than I expected was discovered. It was a relaxing few hours walking around to the gentle hum of poet’s pens scribbling away.

I had a whole notebook of ideas.

A few weeks later Heather, Suz and I met to explore ideas for the writing and the performance space. I was able to use some of the audio resources to gather story. Heather also shared conversations she had had with weavers as part of her residency, these helped a lot with finding character.

Suz and I went away and wrote our poems.

We all met again to rehearse the project, it was great fun and I think it is a unique project to be part of. The event is free, the performance space has limited capacity so you will still need to book tickets.

I love being busy on NPD (National Poetry Day) and I look forward to being involved in the world of carpet for this one.