Photo by Shane on Pexels.com

So I spent 4 days trying to get my feet back on the ground after flying back from a short hop to Australia (no Kangaroo pun intended)… just an attempt to explain why the jet lag hit as it did.

Thursday was the first time I started to feel my body had caught up with me back on home-soil. The first day it didn’t feel as if I was wading through treacle and the first morning I woke up on GMT after a full night’s sleep. Which was a stroke of luck as I had arranged to meet up with Jennie Farley in Cheltenham!

I spent 3 hours at the desk completing much awaited admin tasks. The whole time I felt apprehensive about the big drive, (having not driven for the best part of 4 weeks I was a little nervous), but I made it.

We had a wonderful catch up, a divine Italian lunch out and put in some desk time on her new website as well as discussing Bohemian Voices (which I missed due to Stanza) and her Book Launch in December for her latest collection Hex. Which is already available.

If you wish to read some sample poems from the collection or order your own copy, you can do so here http://www.indigodreams.co.uk/jennie-farley-hex/4594369593

“Jennie Farley’s poems take the familiar as a point of departure, mixing the real with the surreal, the everyday with the imaginary. In ‘Hex’ Farley encounters new truths by seeking out fresh perspectives. This is a thought-provoking and engaging collection that invites the reader to accompany the poet on her journey.”

“In ‘Hex’ Jennie Farley skilfully stitches, unstitches and re-attaches mythology, folklore and her own experiences. These tales are barbaric and bewitching in equal measure, constantly asking the reader to question our own identities and the masks we wear.”

“These poems tread a high wire between magic and fantasy. Jennie Farley’s exploration of myth and biblical references focus on undercurrent and subtext in unexpected and glorious ways with a storytelling quality of a world in slant. A place you will enter and never want to leave. There is more than a sprinkling of magic in this collection.”

Photo by Tookapic on Pexels.com

In the evening there was an event in The Victoria, Birmingham (the old home of Hit the Ode), which I really wanted to get to. I was running on empty by the time I got home (all our local motorway networks are undergoing major works and some speed restrictions drop as low as 30 mph, which is causing tailbacks and queues and adding at least half an hour to otherwise straightforward journeys). I kept juggling with going and staying in and so by the time I felt decisive I had already missed several trains into the city. The roads I had to take to the outer city line were closed and after following diversions I missed another train. I eventually made it to the venue just in time for the start which meant whizzing around hugging everyone at double speed!

Casey Bailey is a poet, author, writer, spoken word performer, rapper, song writer and a secondary school senior leader from Birmingham. He runs Bailey’s Rap and Poetry (BRAP), and through this initiative has performed and spoken at events in the UK, as well as run workshops in rap, poetry, music and song writing.

Having performed at multiple TEDx Events, his first short collection of poetry ‘Waiting at Bloomsbury Park’ was published in July 2017, Casey has been described as a ‘lyrical and literal poet, a conscious Hip Hop artist and a thoughtful and reflective writer’. He provides social commentary and analysis through his poetry, lyrics and articles. Casey is most comfortable when he is consciously expressing his thoughts and feelings, with the hope that they will go on to have an impact on the thoughts and feelings of others.

And he made the list for 30 Under 30 and was a finalist in the BBC Slam this summer.

Anne Holloway is a writer and performer from Nottingham. Her poetry collection There Are No Photographs has been described as ‘beautiful, ugly and important,’ and ‘a book that contains the growth and grit of life with great beauty’. She started her career as co-director of Mouthy Poets and is founder and editor at Big White Shed – an enabling organisation and independent press which supports the growth and development of artistic talent. She hosts and curates poetry events and manages That Welsh Woman of Slam Cabaret fame.
www.anneholloway.co.uk ​www.bigwhiteshed.co.uk​ fb: @bigwhiteshed

Leanne Moden is a poet from Nottingham. She performs at events across the UK and around Europe, including recent sets at Prima Vista Festival in Estonia, Día Mundial de la Poesía in Spain and the BBC Slam at Edinburgh Fringe. Leanne has also performed at WOMAD, TEDx UCL, the Aldeburgh Poetry Festival, and Bestival on the Isle of Wight. She is currently Poet in Residence at the National Justice Museum, and she is working on her first full-length poetry show, which she hopes to take to on tour in 2019. Check out https://www.leannemoden.com/ for more details.

Jamie Thrasivoulou is a writer, poet, and educator from Derby. His collection ‘The Best Of A Bad Situation’ was published by Silhouette Press in 2017. In the past he’s been commissioned by: Apples and Snakes, the Heritage lottery, and the award-winning social photographer Jim Mortram. His music project ‘Bloque Capitals’ were one of the winners of the Culture Matters Bread & Roses 2018 award for Spoken Word & Musical collaboration, the work also appeared on BBC Introducing. He is also the joint-host of Word Wise and The Derby Poetry Festival. Jamie’s live show is both engaging and energetic, and has seen him perform all over the UK including: Outspoken @The 100 Club, The London Poetry Book Fair, Verve Poetry Festival, The Everyman Theatre, and The Other Place, Royal Shakespeare venue. His next pamphlet will be published in 2019 through Burning Eye Books. 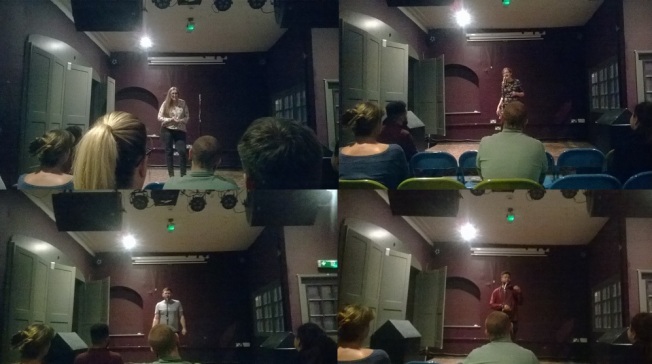 In addition to the main acts there were open mics and the night was split into 3 sections. I always like a double interval because one is never enough time to get to see everyone and grab drinks etc.

The open mic was hot, featuring poets who are Headliners and newcomers to writing and the mic. Always love this combination.

The night was MCed by Casey Bailey, fresh from Edinburgh Fringe and the BBC Slam Finals (which this year was won by Jess Green). He was the perfect host, lively, fully charged and charming.

There was a great community spirit surging through the venue. It was a cracking evening and I was happy ‘GO’ had won my mental tennis rally!

I even managed to grab a reserve slot (despite my adventurous travel), I shared two of my Australian Workshop poems – one from Maddie Godfrey’s workshop and the other from Sanna Peden’s. Both of which are raw with passion and rather sensual pieces.

This was my first UK event and conversations (and my heart) were still very much Australia focused. Even the hand driers in the Ladies sang that tune!

It was a fabulous night and I look forward to future events like these.

On a personal note it was great to be back in Birmingham. Last year was very Worcestershire focused and with some full-time work as well as working with over 200 poets on about 20 projects my time was limited. I hope to travel more widely (again) in future. Since visiting WA the UK feels small enough for me to be able to manage this.