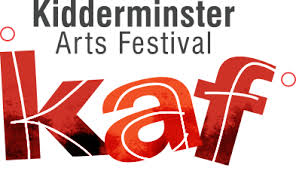 KAF is Kidderminster Arts Festival and this is my 2nd year of experiencing it. The programme is always varied and there were a lot of great events that I was unable to make this year. I managed just three in the end. I love the use of space in the town, the different types of venue that get used and repurposed spaces. The murals get repainted and this year there was even national news coverage of Banksy, but it wasn’t and the local artists knew that, a bit of fun.

I booked this event at the beginning of the July, a day after Early Bird tickets!

This one was something I was very much looking forward to. I have known Liz Berry by name and poems since almost the beginning of this poetry odyssey, discovering her in 2014. I bought ‘Black Country’ ages ago and loved hearing her accent through the words. I have seen her at Poetry Festivals but I entered the scene around the same time she became a mum, so understandably she wasn’t on the circuit. This year however, she is back and I recommend you try to catch her live as her performance is gentle, captivating and powerful. There is nothing quite like hearing a poet’s native voice reading their own work. 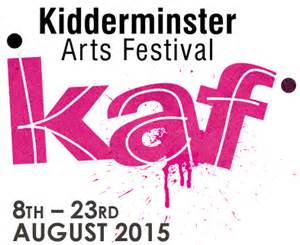 Liz Berry’s debut collection, Black Country, published in 2014, was a Poetry Book Society recommendation, an Observer Porety Book of the Month and won the Forward Prize for Best FIrst Collection. Her poems have appeared in magazines and anthologies, been broadcast on BBC Radio and recorded for the Poetry Archive. KAF Programme © 2015

It was a magical evening at St George’s Church, a great venue. The sun was setting behind the huge circular stained glass window as Blair opened the set. Later on a pink light glowed and shone arcs across the huge white back wall of the church, it was a beautiful spectacle. Blair’s music transported me elsewhere and filled me with inspiration. He is an extremely talented folk musician, with a great future ahead of him. Liz & Blair were both amazing & I watched knowing I was part of something very special.

It was great meeting Liz Berry, so warm and chatting to everyone who had gathered or queued to speak to her, giving real time to us. Making connections.

I had unfortunately forgotten my copy of Black Country as I found out about my brother’s birthday meal at 5pm and they were meeting a town away at 6pm. I rushed in – gifted my brother, ordered, ate, paid and rushed off again to get to St. George’s. I have since found out that Liz Berry will be headlining at SpeakEasy in Worcester in December, in actual fact she was also headlining Poetry Bites along with Jane Commane last night and despite going straight from work, I remembered to pack the book and was able to get it signed last night.

It looks like Liz Berry will join John Hegley as my most seen poets of 2015, but don’t worry I am NOT a stalker, ask Jo Bell!