Amazing Poetry Theatre created by the minds of Spoz (Giovanni Esposito) and Lorna Meehan. Fascinating, a should NOT be missed show. Which so far has been performed twice at the MAC and hopefully will continue to develop and grow.

Ten Letters is a new piece of intergenerational poetry theatre about Birmingham starring the best in local poetry talent. Produced by Giovanni Spoz Esposito and Lorna Meehan and incorporating multi media and live music, Ten Letters celebrates, procrastinates and immortalises this city we live in through a group of unique voices aged sixteen to sixty.

A cross generational show from 16 to 60 bringing together poets who all know Birmingham in their lives. Poems about the great and grime of the place, of memories and hopes.

Incredibly powerful and moving – I did not expect to be reduced to tears or goose-bumps, but with every voice I felt connection, my own memories resurfaced of trips to the Science Museum, the life-size dinosaur, suburban streets, black and white photos taken by grandparents in front gardens. It was all there buried away inside.

Particular highlights was watching the audience reaction to Maggie Doyle’s letter to Birmingham, the generational memories and Mexican wave recognition going on amongst the middle seats of the auditorium.

Lorna Meehan who wants to stab at your emotion buttons with her letter recalling divorce and the role of the city in her dual living experience, cut deep with parallels and reduced me to teary eyes – thank goodness I was sitting amongst poets.

The passion of Spoz’s letter that was uncensored and raw.

This is what I wrote when I got home;

Ten Letters… Has to be summed up in 17 letters…

A Birmingham for everyone! Great show/ media content and live music. Performances that have emotional bite, I ran the whole gauntlet – tears of parallel hurts, tears from laughter, goosebumps! Everything and some unexpected memories came flooding back. Birmingham you are amazing in the skins you have given our lives! Amazing – as were Spoz & Lorna in conceiving this project. Take it to the nation, Birmingham – because you’re bloody brilliant!

There were stunning performances from the entire cast and the whole show was an amazing feat for Birmingham, a love letter, letters of thanks, hidden praise until twisted recollections – a triumph for poetry theatre and the city.

I am SO GLAD I didn’t miss it.

There are plans to move further with it, it was a crowd funded project and incredibly well produced. 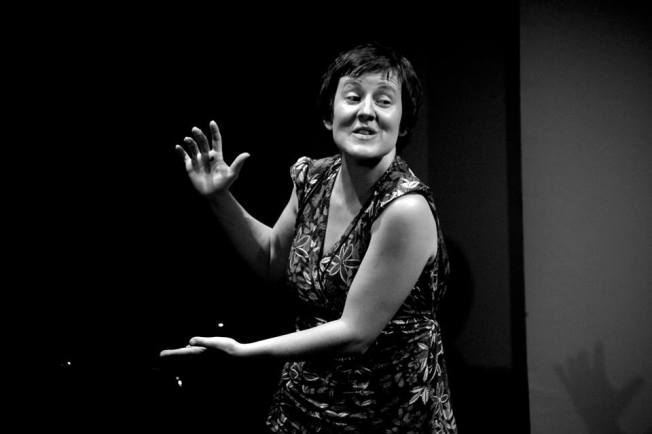 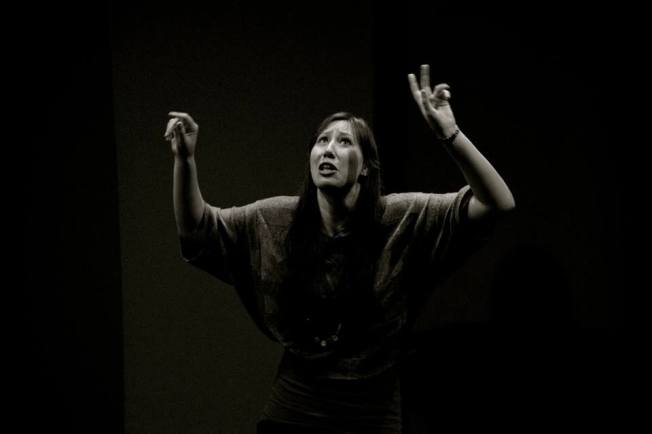 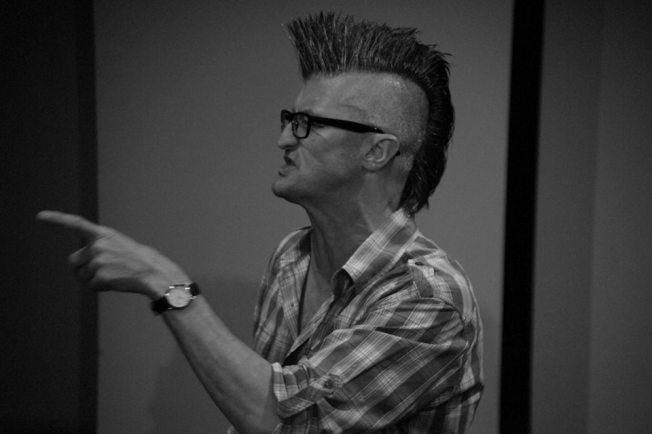 This week was a fairly busy one, due to full time work I was not able to make one of the events listed in the title, but as it is a NEW Word Event – I thought I would take this opportunity to promote it, I am hoping to make next month’s and then give you a real flavour. I heard it was a great evening – but more on that later!

Tuesday Night saw Mouth & Music – this month upstairs in the Gallery (a space I love) with headliners Lorna Meehan and Katie Wragg. I was lucky enough to catch Katie last month headlining SpeakEasy, I wanted to hear more from her, a talented guitarist/songwriter who has collaborated on performance work with Heather Wastie and I hope one day will write Kidderminster, the Musical. (Although she may hate me mentioning such an idea as I have made it sound like a feasible project! Sorry Kate.) And Lorna – who I would follow around the planet listening to, a fantastically talented performance poet, who herself has been booked to headline these 3 events this month – so you read more about her in a minute.

It was an incredible evening, some real talent and great pieces shared. Even had an open mic-er who has spent a year listening to us all and joined in at the mic. Magical when that happens. Splendidly dramatic performance as well!

Stonking night at Mouth & Music – Lorna Meehan, Jasmine Gardosi, Katie Wragg, Heather Wastie, Peter Williams, Paul Francis and a ton of talented open mic-ers…. and in the warmth of the gallery! Loved it – I had the inspiration for 5 new poems and scribbled notes all over next month’s flyer!

I am beyond excited that Tom Crossland and Joe Whitehouse grace the stage in April and before that, next month we have the talents of Paul Francis and Rich Stokes, as if last month’s Spark Off wasn’t fabulous enough!

Next month’s theme is Politicians and as I am attempting to write some similar themed poetry for submission this week I should have it covered. My research this week was to watch and transcribe a programme which in turn pushed me towards focussing on a few specific areas. Should be a fun challenge – I use Media/ politics in poetry but have never written one purely from a political point of view. It is good to stretch yourselves as writers.

I wanted to get to Kings Heath for Howl the next evening – but had also been working full time with some older children and was still tired from the previous week I think – my medication doesn’t help with the tiredness (in case you were wondering why tiredness and sleep feature so heavily on the blog).

Long story short, I did not make it. I fell asleep before 6pm right after my fast-cook-pre-gig tea and didn’t wake up until they had already kicked off. It is some drive too and I really wouldn’t have been safe behind a wheel – I could barely keep my eyes open! So I traded myself an early night and was actually reading in bed by 9:30pm and asleep before 10pm. All sure signs I wasn’t able to make it to the gig.

The day after was also my 5th writing day and I thought if I went to HOWL I would definitely spend most of it asleep- unfortunately that was the reality even without the gig – I think my day started at lunchtime.

Howl Feat is a new evening in a great little pub ‘The Sun at The Station’ in Kings Heath, Birmingham. Hosted by Leon Priestnall, this month’s featured artists were Casey Bailey, Lily Blacksell (who featured alongside Antony Owen and myself at Word Up last month), Lorna Meehan and Joe Cook.
Howl provides a space for the best spoken word artists in Birmingham to speak freely, no restraint, express themselves, provide food for thought, rock the house and entertain.

Casey Bailey
A spoken word poet and rapper from Birmingham. Poetry style is literal and lyrical, touching on a number of different subjects, from growing up in inner city Birmingham to world events. These subjects are tackled with a combination of straight talk and humour.

Lily Blacksell
Lily studies at the University of Birmingham, where she is …president of Writers’ Bloc. She has performed her poetry in pubs, theatres, pub-theatres, poetry slams and literary festivals. In 2013, she was part of Apples and Snakes’ Lit Fuse programme, and she also had a poem filmed in the centre of Brum as part of their Power Plant series last summer: http://vimeo.com/109935773

Lorna Meehan
Lorna has been on the circuit for over ten years, performing at festivals like Glastonbury and touring with Apples and Snakes with her mixture of candid hilarity and mellow introspection. You can listen to her work here: https://soundcloud.com/lornameehan

Joe Cook
A.K.A Cookie, is a poet, musician, workshop facilitator and political activist from Birmingham. Heavily influenced by Hip-Hop and Reggae his musical background shows in his lyrical poetry. Described as “The Streets meets Joe Strummer” , his voice is raw, full of passion and heavy beats. He’s performed all around Birmingham at prolific venues such as The Birmingham Repertory Theatre and Mac Birmingham, Recently opening for Hollie McNish at the Rainbow Warehouse as well as performing in London with the Burn After Reading Poetry Collective

Then Thursday rolled into view and I had finished the early mornings with work. I struggled to wake up though and after a brief early morning coffee and scan of some writing articles, I fell back to sleep. I had supposed to work on some submissions due mid-month which I knew with Valentine’s and Mr G’s birthday would be impossible over the weekend, as it is I missed these deadlines yesterday.

I completed my politician research and shopping online for Mr G and to book Valentine’s tickets, ran out of time for any actual writing, not that MUSE was shouting loud enough to get through.

I tore to the shops to pick up some birthday/valentine’s bits & made it home with half an hour to spare before SpeakEasy (or at least before Claire’s kind lift), I wasn’t sure if I was able to go this month, had I made Howl – I doubt I would have had the energy.

Speakeasy was great – we were late getting there and missed the first half almost, just caught Kathy Gee! The Headline Act was Gary Longden (Staffordshire’s Poet Laureate), was great to catch a whole set of his.

Lichfield poet, Gary Longden returns to Worcester after a long break. He is our headliner for SpeakEasy on Thursday, February 12th. We are also delighted to welcome one of the Decadent Poetry Divas – Lorna Meehan (Headlined at Mouth & Music at the Boars Head Gallery on Tuesday, February 10th). Kathy Gee, John Lawrence, Neil Laurenson, Math Jones and Charley Barnes, together with open mic slots, complete tonight’s event. We hope you can join us for an evening of varied poetry, unique styles, plenty of entertainment and, of course, the fantastic raffle.

It was a good night and enjoyable to watch for once – although Claire Walker and I have both been told to perform at the next one! There was a clashing event I may have been involved with but so far next month’s still free.