I long for a year where I can book time off work to do Ledbury properly but until I get a little more change in my pockets my approach is: spend time with the Programme, highlight everything of interest, check against diary schedule, re-check total cost, rethink the parts I really wouldn’t want to miss, check schedule again and invariably decide I can only manage 1 day – find the day with the maximum bounty and go!

This year, I kept up to date with events via Social Media and managed the last day. Last days at Poetry Festivals are full of tired people with passion in their hearts, glowing as brightly as it did on Day 1 and the celebratory atmosphere is impossible to miss.

I set out early and for the first time used the motorway networks (discovered this is a much quicker way of getting there)! I had my programme and itinerary scribbled out. My first stop was a new venue, Muse Cafe and what a gem, strong coffee and a tasty breakfast to boot. The breakfast filled me up all day, I had taken a picnic, not that it was needed as the streets were filled with Food Markets and plenty of choice. The smell was delicious.

Malika’s Kitchen is an influential collective of London writers who performed at the Festival on the 8th July. Fantastic Beasts was the theme of this year’s festival. This was a relaxed open mic event hosted by Jill Abram.

I was still up at 1 A.M writing a poem for this event and as I sat there in glorious sunshine listening to a string of fascinating poems I realised that I have plenty of poems to suit the theme, several Mermaid (who hasn’t), one about Udine, The Frog Prince – I could go on. Unfortunately I did not have them with me, having only packed the one freshly inked piece. 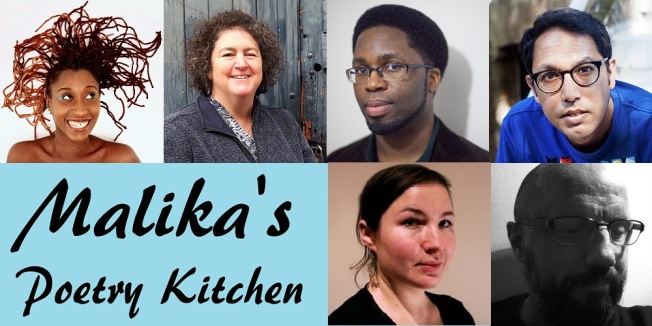 There was a pleasant mix of poetry from an anthology Peter Raynard provided as well. I love this idea, some writers never share their poetry publicly and there are a small percentage of poetry lovers who read it and never write it. Having a dip into book enables these people to take part. Jill encouraged people to use it. I enjoyed hearing Ted Hughes and Emily Dickinson amongst others. 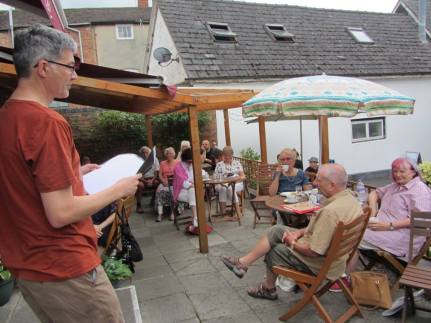 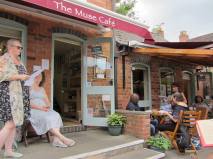 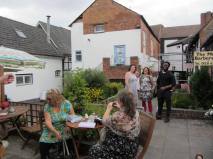 I have not had a chance to upload my photos yet so have borrowed Myfanwy Fox’s instead.  Myfanwy Fox © 2017

Jack is a PHD student who grew up in this rural area. He won the Charles Causeley Prize 2016 (the year after Jo Bell) and completed an incredible set in the Master’s House. I thoroughly enjoyed his reading and his teaching. The link between plough – to plough and verse.

Themetaphor is of plowing, of “turning” from one line to another ( vertere = “to turn”) as a plowman does. Online Etymology Dictionary, © 2010 Douglas Harper 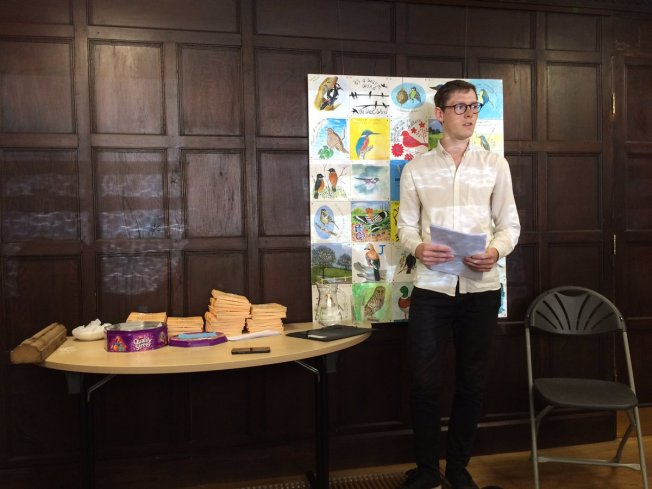 I then had a break – but Ledbury is a festival of poets and by the time I had walked a few metres I bumped into 7 people I knew. I also got to watch some of the events on the High Street – marking the 400th anniversary of the Market House and 21 years of Ledbury.

I got to see Samba Galez you could hear them from the Malika’s Kitchen event!

Before the next event I bumped into Antony & Jo Owen, which meant that I had company at The Master’s House for

I then spent some time timing my walk between venues as I had a 10 minute gap between events later on. I caught some of Nick Lovell’s set in the High Street – Ledbury Slam Champion and caught up with Catherine Crosswell.

Before heading off to the exhibitions at Weaver’s Gallery. I was particularly interested in Book Art 17 and hope that Helen Ivory managed to glimpse this when her and Martin made it to Ledbury on Friday. I wish I could have spent more time there immersing myself in this stunning work. 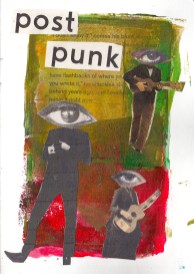 Ledbury used the following image in the festival programme. 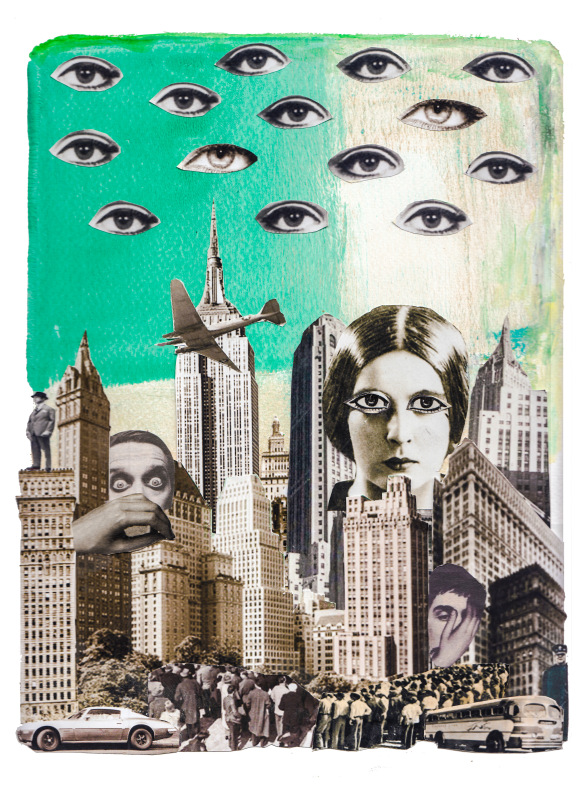 I also popped into ‘Fantasy’ the textile art exhibition upstairs in the Gallery. There were some striking pieces adorning the walls and as someone who struggles to sew a hemline, I am in awe of the craftsmanship involved in such endeavours.

It was a particularly hot day in Ledbury and by the time I reached the Market Theatre I looked as if I could make use of a shower for sure!

Jill Abram has been successfully running Stablemates in London for some time and one day I WILL get there to see it! But when I discovered they were coming to Ledbury this was a factor in making the decision on Sunday being the best day.

It has been great reading all of Jill’s updates from Ledbury and she has certainly been busy!

I bumped into poets in the Foyer, so another event I wasn’t on my own for.

An incredible hour of poetry from new to me poets.

Roger Robinson, a dub-poet and founder of Malika’s Kitchen. His poetry empowers common man and he tackles extremely real subject matter. I enjoyed his set and the new work he is currently involved with.

Seni Seneviratne performed in the morning at Muse Cafe. Her work is carefully considered and doesn’t step gently around delicate issues of race and identity but rather spears straight into the heart of the matter.

Nick Makoha is the Director of the Youth Poetry Network. Again a poet tackling hard subjects and inviting us to make better in the world.

It was insightful to have the Q&A with Jill and each poet before they performed. Love the format!

I thoroughly enjoyed my initiation to Stablemates but unfortunately the timings ran over (due to the heat of the venue) and I couldn’t make it to the main event I had planned to attend. I had no idea what the time was. It had already started before Stablemates finished & by the time I made it between venues, was halfway through!

The launch of Inheritance the new collaborative pamphlet from Ruth Stacey & Katy Wareham Morris – Mother Milk Books. One of the main reasons I had chosen this day to go to Ledbury.

I attempted to listen from the window, (which those of you who know my navigational skills/ lack there of… can now amuse yourselves by imagining me clambering around the outside of the Master’s House trying to find the right window)! There was too much ambient noise. Next, (like Goldilocks), I tried the door, which was too thick to hear through, the wall was a little better.

I understand the policy not to let late comers enter, it is disruptive for the readers who perform right next to the door. But in the previous 20 Minutes with… events I went to people attempted to creep in (with the big old door and straight across a poem), I was upset that I couldn’t do the same. Especially as I had been to a previous event and that was the reason I wasn’t seated in time. 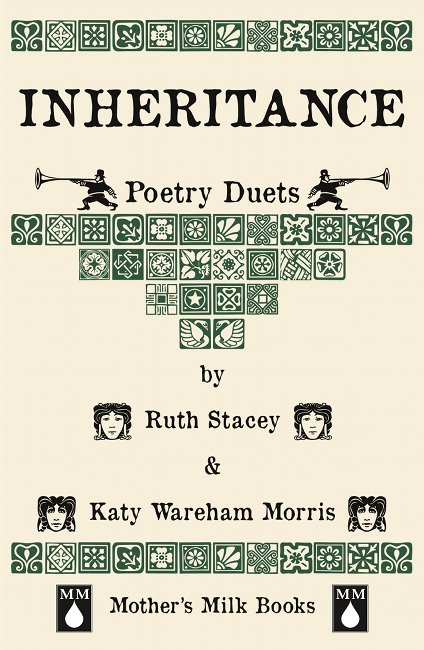 I managed to get in at the end of the set and buy a copy of the book. Apologise and attempt to explain. I was saddened by this part of my day. I hope to catch other readings, I know they appear at Waterstones later this year and I have an idea in the melting pot too.

Fortunately Suz Winspear (former Worcestershire Poet Laureate) was performing on the High Street with DanceFest and once I realised there was no getting into the Launch I went and caught a moment or two amongst the crowds outside. My own fault perhaps for trying to be everywhere all at once!

I practically ran back to the Market Theatre for my final show of the day, which I not only made in time, but found the Stablemates were still in the foyer – so I got to chat to them briefly and tell them how touched I was by their performances and ideas.

I had heard of this amazing project, 2 years ago, in the first year it ran. The project i a platform that unites 13 International festivals.

I enjoy listening to translated poetry and poems written/read in a different language. This was an enjoyable show in which sometimes the poetry was translated, at other times it was read in the poet’s mother tongue or in English by the poet.

A warm eclectic range of voices and subjects and wonderful to watch Helen Mort in action and discover the writing of Nikolina Andova and Charlotte Van den Broeck, who blew the audience away with the poem about her and her mother. It was good to meet her afterwards – she seemed so unaware of what had happened the other side of the stage. I also got to hear more from Kayo Chingonyi, who I met at Verve Festival in February.

The whole show was amazing and I willed it not to finish. I could have happily sat through another round of words from this group. The poets were Tiziano Fratus (Italy), Charlotte Van den Broeck (Belgium), Nikolina Andova (Macedonia), Veronika Dintinjana (Slovenia), Yekta (France) and the UK counterparts, Kayo Chingonyi and Helen Mort.

I wanted to stay for Enemies but at this time was still working against poetry deadlines and other writing tasks, which I knew I had to face once home and I was booked for work on Monday. So I missed this show and just read the fabulous reviews. I have since managed to find many of the performances on You Tube. So not all was lost.

It was late by the time I made it home and my writing work kept me at my desk until 1 A.M – which was only possible on post-Ledbury adrenaline!

and films to watch http://www.poetry-festival.co.uk/festival-films/