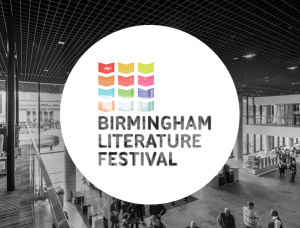 This year a call out for poets was announced by Naked Lungs (Joe Whitehouse & Christopher Baker) for a collaborative project and performance at Birmingham Literature Festival.

80 people applied to the initial advert and although Naked Lungs didn’t interview all applicants, it still feels special to be picked as one of the four poets. The brief was intentionally loose to give artists room to interpret and play, we met up and visited the Community Garden in Digbeth for some extra inspiration and to spend some time together.

I really enjoyed meeting new poets, Hannah Graham is a local poet performer and Amanda Hemmings works with young people writing at the MAC, Aysha Begum, is a poet I already knew, we have performed at the same events and I have enjoyed some of her projects, like Bridge the Gap. She recently won the Oxjam Slam in Birmingham.

The whole project was individuals working privately on the commission and then coming together to unite our words and ideas. I really liked the fact that we wrote in the dark and then discovered the elements of synchronicity.

Unfortunately due to demonstrations *that I am not going to give promotion to*, one of our performers was prevented from arriving safely at the library. This situation was fully understood by all of us and I think if it had been any of us in that position we would have done the same. But at one point we were potentially half the cast down Hannah and I thought we might have to fill the whole half hour together. A daunting prospect!

This would have been a challenge on timing alone. We had been asked to write for 7-8 minutes worth of material, due to differences in the way we all work and the poetry we produce, not every artist fulfilled the timings brief. This meant that we were already short of the specified performance slot.

Everyone wrote amazing poems and performed them brilliantly. We all work differently and I am sure everyone put their all into the work for this performance, certainly in the time spent learning their poems, which is something I didn’t have time to do – as they were only completed 4 days before the performance and I had 2 days of work and 2 events in that time.

We needn’t have panicked though as the extra time allowed us to introduce the project and the poems and contextualise some of our material. It was a worry but needn’t have been, we were just a few minutes short of the 30 and no-one seemed to mind.

It was a great project to be involved with and great fun performing in the foyer of the Library of Birmingham. We had quite a good crowd of people watching, along with our own supporters and everyone did really well. I still can’t believe that Amanda hadn’t performed for a year, what a brave way to get back into performing! Hannah Graham is amazingly talented and I look forward to watching her in the future.

I will continue to seek out future opportunities as amazing as this one.