March Lockdown was only a week – but those 7 days felt like a lifetime!

I was one of the many people who actually found life online a blessing, it was a way of staying connected during Lockdown and after a week I realised the Writing Community had gone full throttle into Teams, Crowdcast, Webinar platforms, Zoom (of course) and suddenly INSTA and FB were brimming with events, workshops, performances and festivals. I was a little slower to fill my diary as I was adjusting and juggling concerns for family, finances, future etc. (as we all were).

I realised having suffered depression and my year of incapacity last year (where I couldn’t be online for 6 months due to not being able to concentrate/focus/work/ use a desk/chair and was off social media for a while longer as by the time I finally reached the desk the manuscript was 5 months overdue an edit)! That this online connection is essential for some of us.

It was also a blessing as my body had time to heal, I wasn’t running ragged or trying to push driving distances. I also hadn’t found a solid way back into the poetry community after a year away. This exodus online, bridged that gap and gave me the ability to travel again – although it was a while (months) before I realised international waters were open!

I didn’t leave my home territory for the first month of lockdown and after that was only brave enough for one nature walk a week (it was still restricted back then that you can’t drive to walk and we live in an urban area), there are trees lining the dual carriageway, but we have a garden so I sat with nature rather than walking.

Looking back, I knew even then it was a gift that we had Lockdown in the Spring, for much of the world it wasn’t as warm or abundant with nature. A few months into lockdown I was one of two people wearing a mask to supermarket shop and only once or twice a month. Mr G. had to work throughout lockdown so there was always a possibility even when I was keeping myself from the world. So thank goodness for life online.

Of course there were strains and worries, fears and concerns, waking every day for months… well we all lived it right, it has been tough financially and I know people who were very ill with Coronavirus. I am choosing not to address it in these posts (other than excusing myself for not mentioning it in this first one).

At first my online meets were just for virtual coffees and a few regular events I attend which had moved online. I want to give a big shout out to Poets, Prattlers and Pandemonialists https://www.pandemonialists.co.uk a.k.a. Emma Purshouse, Steve Pottinger and Dave Pitt who have grown to adapt to many platforms this year but immediately moved events online and were making them fully accessible no matter what your situation, lots of hard work.

I am delighted that after putting the hours in and giving so generously they have maintained working status with lots of projects online. They always are busy people and it doesn’t look like they are about to let a pandemic stop that ethic!

Polly Stretton immediately moved 42 online, a regular event in Worcester that we have been enjoying on Zoom since March.

I was writing for a Worcester Cathedral Poetry Project, organised by their poet in residence, Amanda Bonnick.

And then Carolyn Jess-Cooke gave us the STAY AT HOME FESTIVAL – https://stayathomelitfest.co.uk/about/ the first in a long line of festivals online – it was brilliant and on a massive scale and conceived (as many things are) on Twitter.

I unfortunately missed the call (as I was working F/T until lockdown) but I attended most of the festival weekend and was lucky enough to be one of the showcase poets.

I will write an entire post about the festival, I was hugely grateful and it was also the beginning of filling my notebooks – (2 over this weekend), avoiding household chores and unpacking boxes!

The end of August saw a flurry of open mic events in Birmingham, Kidderminster and Worcester.

Word Up, Coffee Lounge, Birmingham: hosted a special I Am Not a Silent Poet event with Reuben Woolley, Marcia Calame and Jess Davies headling. The nature of our poems fitted into serious, often unperformed pieces which tackled big issues, which is the voice of Reuben’s online publication I Am Not A Silent Poet, protest, exposure. 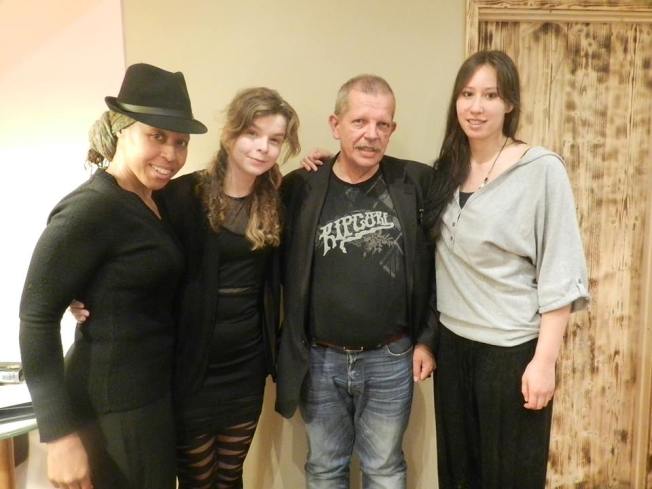 My set consisted of the poems he published earlier this year https://awritersfountain.wordpress.com/the-write-year/ and some others that I shy away from performing.

It was a great night hosted by Jasmine Gardosi.

All photographs © Reuben Woolley 2015 – there were more performers who I haven’t shared photos of, apologises to them. 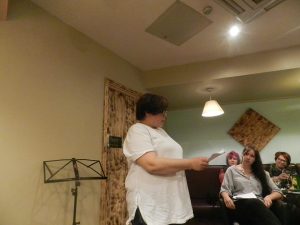 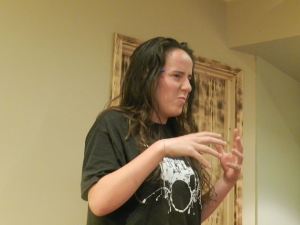 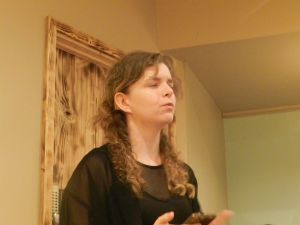 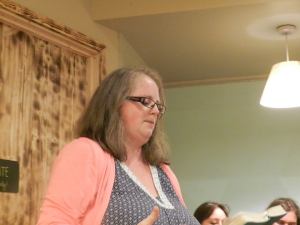 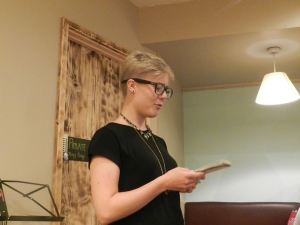 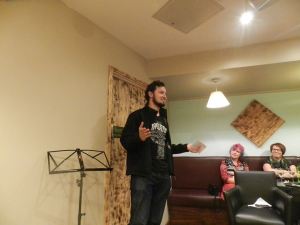 After the event we went to the pub for a catch up, which was great because there is never enough time to talk to people at events and Reuben lives in Spain and only comes back to the Midlands for August. He was a national tour this year too, gigs up and down the country. I hope he is now having a rest!

This event was originally in the open air/marquee positioned close to the main stage and the closed street of the festival. However, the weather left us with no option but to retreat into the Boars Head Gallery – which is always a great space to perform in I think. The bands were on downstairs and it felt exciting and intimate. There was optional fancy dress and I am so glad other people entered into the spirit of it.

I had researched my clown make up but sadly on the day I was too hot getting ready and the white base wouldn’t cover my skin – in the end this was a godsend really as Maggie Doyle and I ran from the car park to venue – me losing half my wrapping paper patches which were all over my PJs/trousers and most of my make up ran too. So imagine the carnage of a white base face! 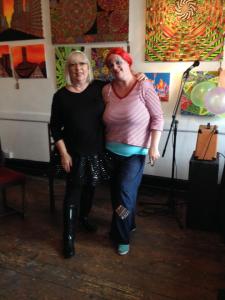 The event was as exciting as dressing up. Headlined by Amy Rainbow and her wonderfully talent son, Merlin – who in spite of the small performance area, wowed the audience with his amazing Hula Hoopla skills. 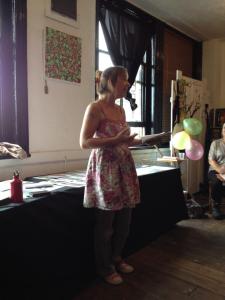 It was lovely to perform as part of KAF (Kidderminster Arts Festival) for the 2nd time and good that this event attracted performers who had not previously attended Mouth & Music.

It was a lovely afternoon. Photo credits to Peter Williams, who also performed, treating us to a couple of songs. 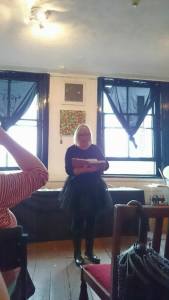 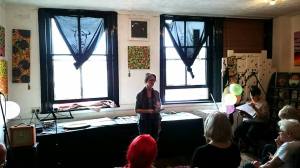 The event was hosted by the wonderful Ringmaster, Sarah Tamar.

I am delighted that 42 is pulling in such a wide audience and huge collective of poets and writers. It is always an exciting event and recently the list of performers has increased dramatically. The theme was ‘Altered States’ which was more open to interpretation than other themes and produced a varied feast of stories, storytelling and poems. It was a fantastic night, I thoroughly enjoyed it!

42 was my final event/open mic of the month.