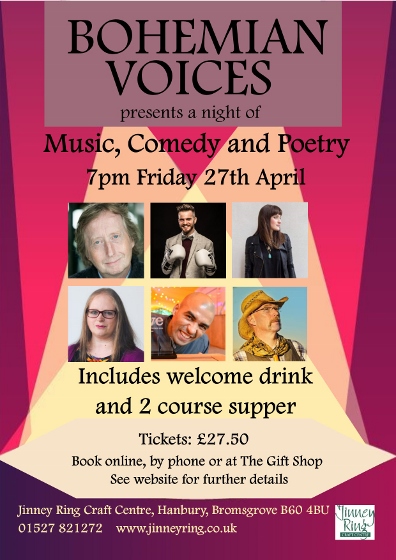 I am delighted to announce I am part of the line up for this month’s Bohemian Voices at the Jinney Ring in Hanbury.

Steve Soden used to run this event in London and successfully ran an event last Autumn for the Jinney Ring. 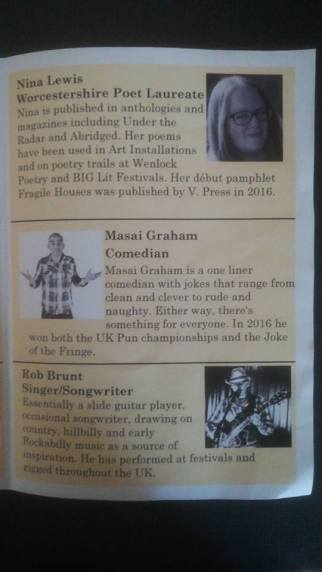 Compère
Steve is an intriguing and compelling artist who engages his audience with a strong presence.
He has a book of poems To Hell and Back published and has released his third studio album this year Welcome to the Asylum.

Birmingham Poet Laureate
The Poet with a Punch
Matt who is a professional boxer has a unique talent and voice in contemporary poetry.

Danielle Cawdell is a pianist and singer songwriter based in Birmingham, UK.
Her music is uncomfortably beautiful; piano ballads peppered with riot girl guitar noise all lead by her delicate voice telling hard truths.
She at once echoes both the classic writing of Joni Mitchell and the contemporary emotionally efficient arrangements of Perfume Genius.

Nina is published in anthologies and magazines including Under the Radar and Abridged. Her poems have been used in Art Installations and on poetry trails at Wenlock Poetry and BIG Lit Festivals. Her début pamphlet Fragile Houses was published by V. Press in 2016.

Comedian
Masai Graham is a one liner comedian with jokes that range from clean and clever to rude and naughty. Either way, there’s something for everyone. In 2016 he won both the UK Pun championships and the Joke of the Fringe.

Singer/Songwriter
Essentially a slide guitar player, ocassional songwriter, drawing on country, hillbilly and early Rockabilly music as a source of inspiration. He has performed at festivals and gigged throughout the UK.
For more information and booking:
http://www.jinneyring.co.uk/acatalog/Music-and-Poetry-Night.html
Bohemian Voices presents…
A night of Music, Comedy and Poetry
Including a two course meal in Ring’s Restaurant

Arrive at 7:00pm at Ring’s Restaurant for a welcome drink followed by a main course served from the counter.
The first performance will take place from 8:00pm until 8:45pm.
An interval will follow for dessert and coffee.
The performances will commence at 9:45pm until 10:30pm.

Please note:
There are no physical tickets for this event. Upon booking, you will receive an automated response from our website and also a confirmation email which is the equivalent to an e-ticket.

We’re now officially in the second half of Na/GloPoWriMo. Hopefully you’ve found your versical rhythm, so to speak, and you’ll find that writing poems the remainder of the month will be a snap.

Today’s featured participant is Katie Staten, whose response to the villainous prompt for Day Fifteen imagines a day in the life of Ursula the Sea Witch.

We have a new craft resource for you today, or maybe an anti-craft resource, in the form of this essay by Michael Bazzett warning against the fetishization of craft. Thinking hard thoughts about word choice, line breaks, sound, and structure can help to make a poem better, but too much emphasis on perfection can breed stale, airless verse. There always has to be room for play, and not just work, in our poems.

In this vein, our (optional, as always) prompt for the day asks you to write a poem that prominently features the idea of play. It could be a poem about a sport or game, a poem about people who play (or are playing a game), or even a poem in the form of the rules for a sport or game that you’ve just made up (sort of like Calvinball).

Today I’d like you to write a poem based on voices, ideally a dialogue. This can be a formal dialogue for two voices, like John Fuller’s ‘A Dialogue between Caliban and Ariel’, or you can present just half of the dialogue and leave the other half to the reader’s imagination, as in Kathryn Maris’s ‘Darling, Would You Please Pick Up Those Books?’, or you might like to present an overheard third-person dialogue as Sharon Olds’ does in her poem, ‘Voices’.

Whatever you choose to do, the key points are that you must include speech, and two or more people’s voices (even if one is just implied).

Having already completed a two voices poem this month I decided on using the Naponet prompt on using rules of a game. I chose badminton, a game I have never played.

I started with the rules and took it from there. I wrote about playing indoors as a child (usually reading), compared to my active, sporty brothers. It became a prose poem. I am not entirely satisfied, but it is late and I have been at work all day. So I am willing to leave it. I have followed the rules of the game and as far as the prompt goes, succeeded.

She served her pages diagonally, swiped the next one open with the edge of an index finger,