Well we have nearly made it! 1 more day to go…

Hello, everyone! It’s the penultimate day of NaPoWriMo/GloPoWriMo!

Our featured participant for the day is orangepeel, where the Skeltonic verse for Day 28 celebrates (sort of) the experience of being sprayed by a skunk!

Today’s interview is with another poet/publisher, Sarah Gorham, the editor-in-chief of Sarabande Books. This interview explores her dual role as writer of her own work and the promoter of others’ poetry. You can learn more about Gorham here and read some of her poetry here and here.

And now for our (optional) prompt. Today, I’d like to challenge you to take one of your favorite poems and find a very specific, concrete noun in it. For example, if your favorite poem is this verse of Emily Dickinson’s, you might choose the word “stones” or “spectre.” After you’ve chosen your word, put the original poem away and spend five minutes free-writing associations – other nouns, adjectives, etc. Then use your original word and the results of your free-writing as the building blocks for a new poem.

I really enjoyed this prompt as it gave me time to indulge in my poetry bookcase before choosing my starter poem – Mansion Polish by Maurice Riordan (who I was lucky to meet back in 2013, after 4 weeks in my poetry skin).

I followed the prompt and my concrete noun was horseshoe. After free writing I settled to the making of a poem. Not happy with my first two attempts, I cracked it on the 3rd. They are all relatively short poems. I have currently written 94 NaPo poems! I took one to Stanza last night and it was approved, so there is some hope for a small % of them.

the brass one her mother hung over the fireplace

Carrie Etter’s prompt was to write about an object belonging to a parent, the focus was on what it means to you. I was happy with the overall result although it still needs a little work.

I could read stories, but not between the lines.

… I outgrew my own, this hand

was never for giving.

Jo Bell posted This by Maitreyabandhu

This neat poem describes a single moment of paying attention.

…. Give yourself permission to read critically, and if a poem you enjoy seems to have a hairline crack in it, take Maitreyabandhu’s mindful approach – notice it, but don’t let it spoil your enjoyment of the poem as a whole. The poems we learn from, like the people that we learn from, can be imperfect. – Jo Bell

I shall miss Jo’s daily reads and discussions much more than writing daily poems.

Thanks for the great effort, Jo. 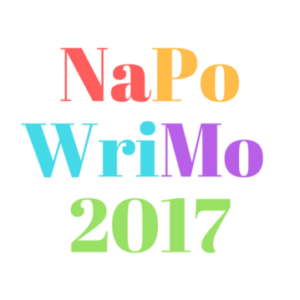 seem to have gone AWOL – they are in, but seem to have hidden the prompt. Thanks to Jackie Biggs, I found it on an attachment.

Good morning on this penultimate NaPoWriMo day! Today, we’re asking you to reuse, recycle and rehash with a cento.

A cento is a poem made up entirely of lines from other poets’ poems. Our version differs in only one way. We’d like a 28 line cento, but it should use lines from your own poems written during NaPoWriMo. Not managed 28 poems so far? No matter. Write a shorter poem, or use multiple lines from the same poem, or use lines from your pre-existing poems. The important thing is it’s your own voice you’re remixing and restyling. You’re allowed to make minor tweaks to the lines to make them fit, so don’t worry about changing tenses, adjusting grammar, or rephrasing slightly, but don’t add words.

There are lots of excellent centos out there, but we’re going to go for a classic: John Ashbery’s ‘The Dong with the Luminous Nose’: http://www.english.txstate.edu/cohen_p/poetry/Ashbery.html