I can now reveal why all went quiet on reviewing Verve Poetry Festival last month… I was writing this review for Sabotage Reviews. I am delighted they have posted it and I will now (when I have time), resume the blog posts before I forget all the details of the events!

I am really chuffed to have had the opportunity to write this! Get it in your diaries for next year.

I have always been a bit of a fan-girl of Hollie McNish and it seems ages since I last saw her perform. I was delighted to discover that thanks to Poetry on Loan and Brenda Read-Brown, Hollie was coming to perform at The Hive in Worcester.

I always pick up the What’s On Guide and generally gleefully thumb through it… I forgot to have a proper look and only discovered this event in February! The tickets had been on sale for a while and after making enquiries at the library was not holding out much hope of snagging one. But I DID! And then I had to count down the weeks patiently. (I was not patient!)

There were many things that Hollie McNish didn’t know before she was pregnant. How her family and friends would react; that Mr Whippy would be off the menu; how quickly ice can melt on a stomach.

These were on top of the many other things she didn’t know about babies: how to stand while holding one; how to do a poetry gig with your baby as a member of the audience; how drum’n’bass can make a great lullaby. And that’s before you even start on toddlers: how to answer a question like ‘is the world a jigsaw?’; dealing with a ten-hour train ride together; and how children can be caregivers too. But Hollie learned. And she’s still learning, slowly.

Here for your pleasure is Hollie.

I have a copy of Cherry Pie and I knew that ‘Nobody Told Me’ would be hard for me but I also knew that it contained lots of personal writing and brilliant poetry by Hollie. It is a brash, wonderful, truthful account of motherhood.

I loved every minute of her performance and the fact that she expected about 20 people because it was a library gig. There seemed to be 200 chairs full but I think the official ticket number was 130 – mainly women, but some men too. An audience of Hollie fans and what I particularly loved was that I knew just 4 people there! So there are 100s of people who love poetry and will travel to Worcester to see it – this is good to know.

I chatted to the lovely strangers from Malvern that I sat next to before the event and did a little quiet promoting for SpeakEasy, Poetry Ballroom, Uncorked and WLF.

There was a great atmosphere in the basement – like we had all been invited to some secret club. I once used this space with my writing group, but I had expected the event to be held in the studio. The audience was too big for that space.

I queued up for ages afterwards to chat to Hollie, but unfortunately the majority of people in that queue were mums and there was only so much conversation I could take. Also it was the end of a long, hard week and bless Hollie, she was spending a long time with each individual. I also felt bad (although she told us not to) because I wasn’t buying the book. It is a brilliant book but it is a very tough subject for me at the moment so I know I wouldn’t read it straight away. I will buy it. It is packed full and a bargain on poem/story to £ ratio. But I wasn’t buying it right there. So I freaked myself out a bit in the line and decided to call it a night. I regret now, not waiting to chat with her as I have on previous occasions and it would have made my night to do so. On the flipside I got home really early and had the rest of the evening with Mr G.

It was a joy to watch Hollie perform and listen to the Q & A afterwards. Sharing her writing method and unedited voice was good to know. Witnessing her realising nobody has ever asked her for advice was as funny as hearing about her (pre- Mothercare) advice from her Grandmother. Loved it!

Last year Sarah Dixon contacted me about headlining in Manchester, originally the booking was set for April/May- but due to Sarah relocating my spot was brought forward to March.

I booked time off work and made arrangements. I was originally going to do an overnight and what I learnt from this experience is how to be sensible… gigging further afield, it is probably best to stay overnight. Fortunately, Rick Saunders (a.k.a Willis the Poet), signed up for the open mic and offered to drive. Unfortunately his car broke down the week before and we ended up hiring a nifty little number to get us Northbound.

Manchester isn’t all that far away, but after a day of work and with butterfly nerves I did not fancy driving. Plus I have an inherent fear of the M6! That pesky Toll road…

Our journey out there was easy, didn’t take long. We found the venue and headed off for some tea before going to the The Llyod’s Hotel. Our journey back was horrendous with motorway closures, traffic jams and a satnav that was convinced the signs suggesting junction closures were wrong.

Quiet, Quiet Loud is an incredible event that Sarah has been running for two and a half years now. I can imagine the loss to the local poetry community (having just experienced the end of PTS at the Scary Canary).

Mark Pajak was born in Merseyside. His work has been published in Magma, The North and The Rialto (among others), been highly commended in the Cheltenham Poetry Competition and National Poetry Competition and won first place in the 2016 Bridport Prize. He has received a Northern Writer’s Award from New Writing North and was 2016’s Apprentice Poet in Residence at Ilkley Literature Festival. His first pamphlet, Spitting Distance, was selected as a Laureate’s Choice and is published with smith|doorstop.

Becky Cherriman is a writer, workshop leader and performer based in Leeds. Published by Mslexia, New Walk, Envoi, Mother’s Milk, Bloodaxe, Well Versed and in… Poets For Corbyn, she was resident poet for Morley Literature Festival in 2013 and lead artist for Altofts Festival In A Day 2016. Becky is a co-writer and performer of Haunt, a site-specific theatre commission for Imove, a project about homelessness. She is currently working on her one woman show with voices, Corseted. Her first poetry pamphlet Echolocation and first collection Empires of Clay were published in 2016 by Mother’s Milk and Cinnamon Press respectively. www.beckycherriman.com

Nina Lewis is widely published in poetry journals and anthologies, including Abridged, Fat Damsel, Take Ten, Hark, Here Comes Everyone (HCE), I am Not a Silent Poet, New Ulster Poetry, Nutshells and Nuggets, Under the Radar and Visual Verse. Worcestershire Poet Laureate Competition 2015/2016 runner-up, Nina often performs at spoken word events and literary festivals. She was commissioned to write and perform poetry on ‘ecology and the city’ at the Birmingham Literature Festival in 2014. Her haiku have appeared in an art installation at the Midlands Art Centre, on the Poetry Fence at Acton Scott Historic Working Farm and in Municipal Bank Vaults for an International Dance Festival. Nina’s work also formed part of the poetry trail for Wenlock Poetry Festival 2014. Fragile Houses, published by V. Press autumn 2016, is her first pamphlet.

I was really excited to meet Becky and see Mark again (who I first saw perform at Waterstones last Autumn with the Poetry Business).
It was a thrill to stand in a room I had seen on social media for years! The standard of poetry was really high and there were plenty of open mic spots. An appreciative, poetry loving audience and bundles of talent. It was lovely to see Sarah again and hear her poems, many from her pamphlet collection (fingers crossed for this to make publication soon). I had the pleasure of reading through a draft copy for her last year. She chose some strong poems to share with us. 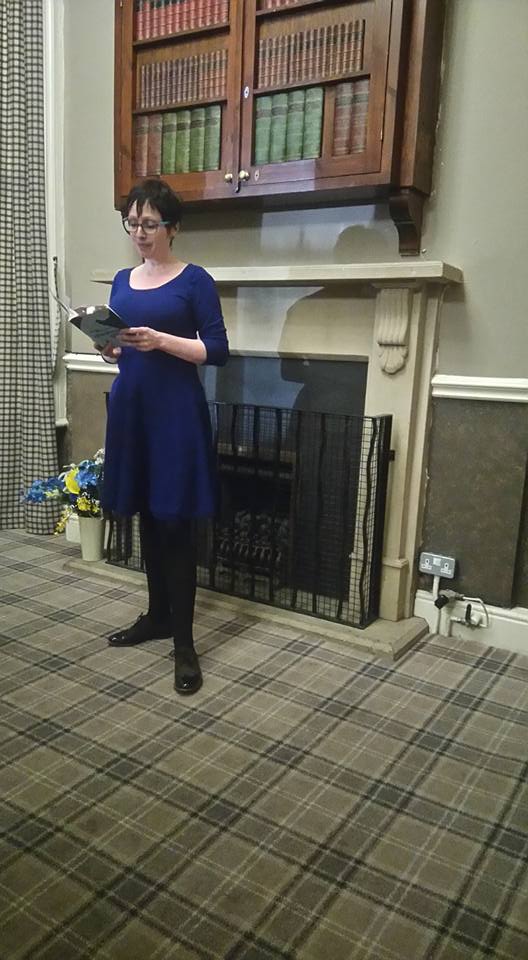 Becky Cherriman was the first Guest Poet to take to the floor. I love it when I do not know a poet and have no idea what to expect.
I was moved by Becky’s set and need to buy her book, she was a wonderful performer and her poetry ran a gauntlet of emotions. An incredibly powerful set. It was good to meet her.

I would have bought her book on the night but with hire charges and petrol/drinks etc. my cash was a little light. I will catch her again and you should too. A gifted poet who deals with all shades of life. I still have her poetry in my head a fortnight later.

Mark Pajak took us into his world after the interval. I was looking forward to hearing his work again and thoroughly enjoyed his set. It was good to hear more from him. He is talented performer and an engaging poet. He writes about some seemingly bizarre incidents and is not afraid to share them, despite being advised not to. I appreciate that rebellious side. His work is like nothing I have read or heard from anybody else, unique. Prizewinning and extra special.

I was nervous having watched these masters at work and really wanted to change my set – but having timed it I didn’t think it was appropriate to cast last minute changes. I find my pamphlet fairly difficult to share as I want to give the audience enough of the sizzle and taste but don’t want to take them on the whole chronological journey or indeed read all the poems in the book. I have seen other headliners (with pamphlets) sharing several newer poems too, this may be the way forward – but I am not entirely sure. It may be like when you see a band and want them to play the albums and they slip in several B sides… I have always been a fan of the B side. 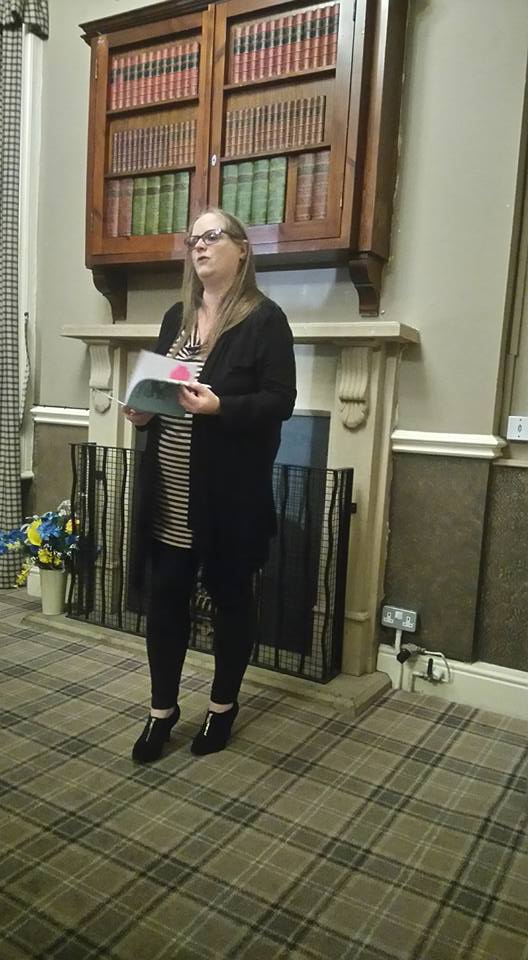 It was a pleasure to be invited to the final Quiet, Quiet Loud and read in Manchester. It was an inspiring evening filled with poetry buzz.

If you want to read a review of my set, check out Rick’s blogpost below.