I am excited whenever new festivals pop up, especially when they are not too far from home. Due to busy plans and the Verve Festival in a few weeks, I am not able to go to all the events I would like to this weekend. If I had a magic wand and teleporting superpowers I would also go to: 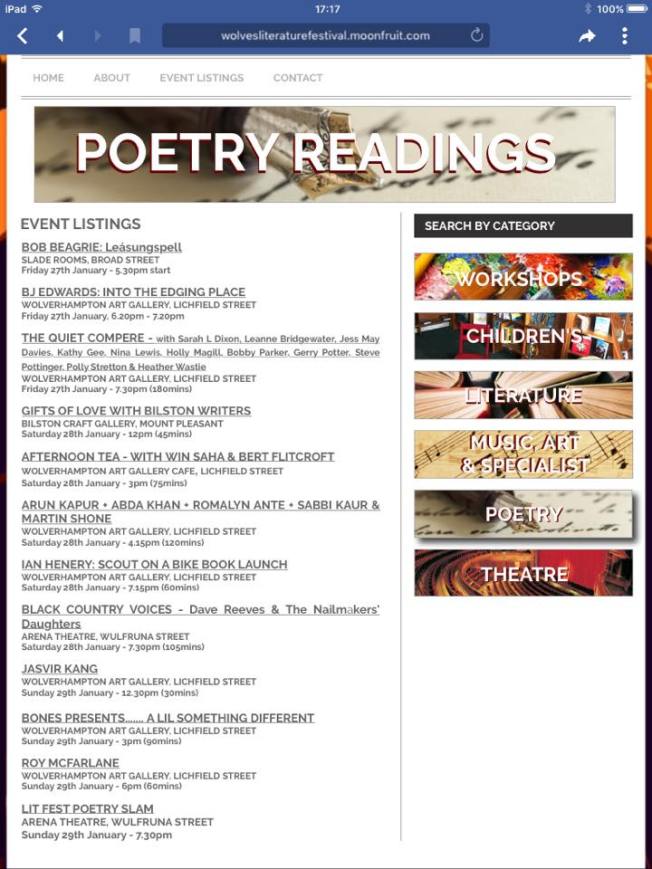 Tonight was brilliant, it was great to be part of an event on the opening day of the festival (27-29th). The Quiet Compere – conceived and hosted by Sarah Dixon.

It was such an enjoyable night. The room in the gallery was very impressive. I really want to go back to the Gallery to just take a look at all the work on display. We had to walk through the Art and Writing space, I took a quick look at the exhibition during the interval.

It was great that an audience showed up and there weren’t too many empty chairs. During the first half the mics were set up quite a distance from the audience, this was changed by request during the interval. I just presumed cable length shackled us to the back of the room. It has to be the best backdrop ever though!

It was such a fantastic night and lovely to hear comments about my set, which went down well… despite last minute nerves of ‘I have chosen all the wrong poems!’. The 10 minutes flew by and I really enjoyed performing. I was very nervous before, but think I covered those nerves well once I had the mic in front of me.

I really appreciate having the opportunity to perform in the Quiet Compere again, we did one in Worcester in 2015. https://awritersfountain.wordpress.com/2015/08/01/quiet-compere-tour-2015-stop-6-worcester/

Sarah Dixon, Poet, Quiet Compere, Amazing Lady! I had the privilege of reading the workings of her new pamphlet that she shared poems from this evening. It was the first time I had heard her read them though, always adds to the power. 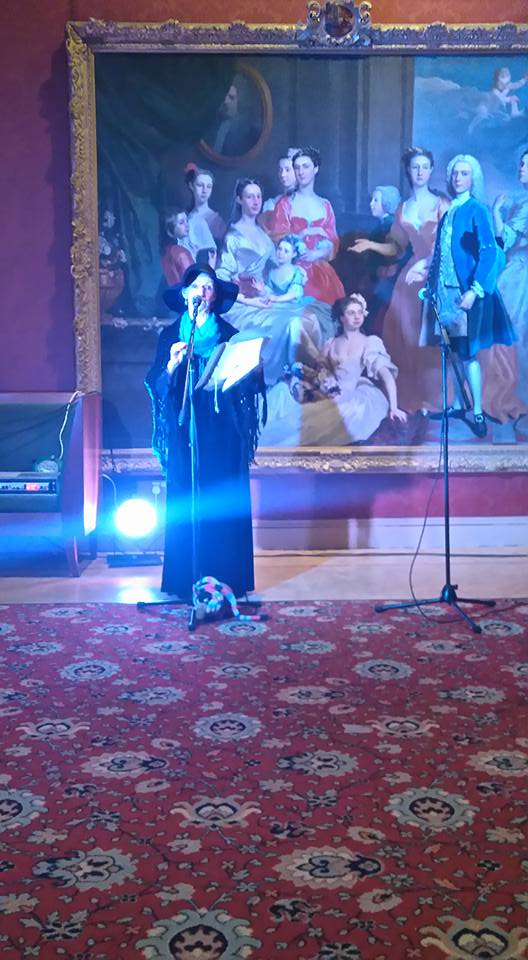 Polly Stretton kicked off the evening (Sarah always goes first, knowing how we all hate that opening slot) the first of ten poets – sharing fairy poetry (she has many) and once again I had the inside track on part of her set as she tested it out at 42 this week. She opened her set with a poem about Evelyn Glennie and a tambourine. Fine set. 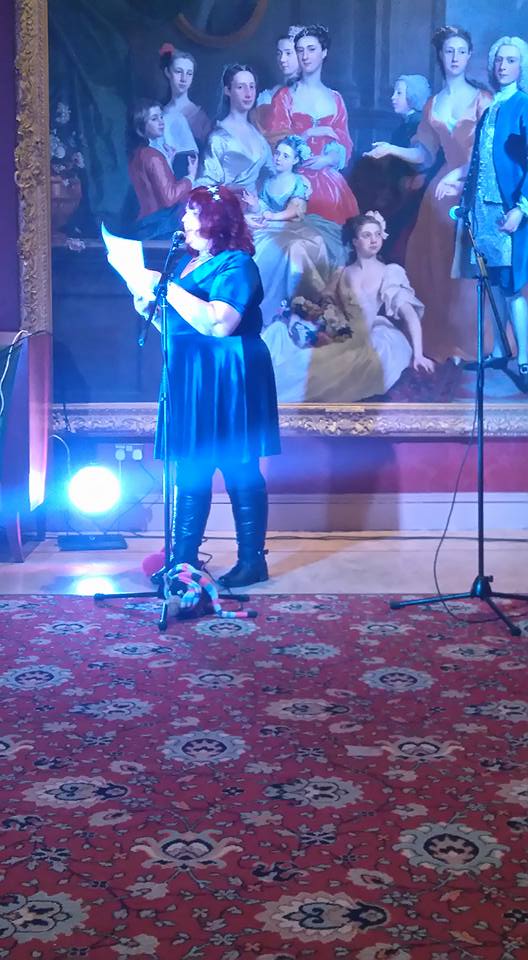 I love Holly’s poems (and wardrobe). It was a great set and good to hear the audience reaction from those who had not heard her before and didn’t know what to expect. As always the serious mixed with a good measure of fun.

Then it was my turn Nina Lewis.

I thought long and hard about which poems to read. For a week I carried my notebook and pamphlet in my work bag. I had such a shocking week at work that both stayed in my bag as I didn’t have a moment to ponder through them.

Then I had my Burns set to be ready for the 25th. Fortunately I chiselled out some time on Friday to get myself ready. We were performing in the Art Gallery so I wanted to use some of my artefact/art inspired poetry. There was also a table filled with goodies (all of our books and wares) so performing from Fragile Houses also seemed like a good idea.

I shared the runner up poem from Worcester Porcelain Museum Competition ‘The Unfading Cornflower’, then my poem for Marina Abramovic ‘Unfolding’, then one of the Arthur Rackham inspired poems ‘Buckled Air’ before moving onto the pamphlet and ‘Fabricious Avenue’ (my only 52 poem on colour), Fortori and Your Gift to finish the set with a poem about my parents.

Next came Leanne Bridgewater who threw fruit into the mix (literally)! I was looking forward to watching Leanne’s set as it has been a long while since I have seen her performing her own work. She educated us all about Veganuary. Veganuary aims to reduce the suffering of animals by inspiring and supporting people across the globe to go vegan for the month of January. She handed out fruit in support of this gesture. Then she read from her book, Confessions of a Cyclist, which has such playful content inside.

To complete the five in the first half was Tom McColl.

Tom stepped in to fill Bobby Parker’s spot. Tom is based in London and was one of the new to me poets. A good mix of serious and amusing. I really enjoyed the humorous material included in his set.

During the interval I was able to catch up with people and whizz around the gallery downstairs. I was really looking forward to the second half.

Which after more from Sarah was started by Heather Wastie.

Now, I have always loved watching Heather, for the past year she has been busy working on Idle Women and also let Mouth & Music go after facilitating the Open Mic night for many years, so with the exception of a performance here and there it has been ages since I have had the pleasure of watching her on stage. I thoroughly enjoyed the set and so did everyone else.

Then Gerry Potter, who was the other new to me poet.

Gerry is from Liverpool originally and is a lively spoken word performer. His material took me back to my birthday trip to Liverpool last summer and I started scribbling all sorts of things in my notebook, whilst watching his set (I can write without looking at the page) and my brain can just about listen and write if I don’t focus on the writing. I have not re-read these notes but if they become poems ever, they were inspired by Gerry’s set which encapsulated life, childhood and the city.

Like Heather, Jess is another poet who hosted an open mic event, so although I saw a lot of her last year I had not heard her poems for a long while. I was delighted to hear new poetry and witness a brilliant performance. I really enjoyed her set.

Kathy Gee was next. 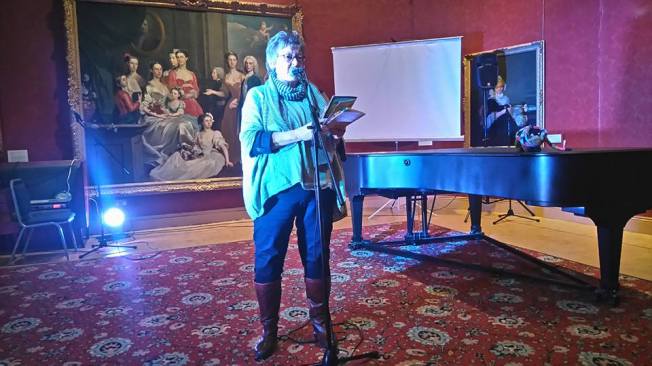 She treated us to poems from her Book of Bones and some from The Suite for the Fallen Soldier, a choral project Phil Mountford was commissioned to create. Kathy wrote the narrative suite. I love Kathy’s poetry too, thought provoking and highly crafted. Words you muse over long after the final line. She bravely risked a newer, political poem too. It was a great set.

The Suite for the Fallen Soldier

And finally to complete the great night of poetry we heard from Steve Pottinger.

Again I have seen Steve perform recently but it has been a long while since I saw him headline at Mouth & Music. It is always great to hear a longer set from performers like Steve. Like listening to a whole album rather than enjoying a few tracks. I thoroughly enjoyed the set and he did a grand job closing the night. Like Kathy, he bravely performed a very freshly penned poem too, less than a day old.

It was a fantastic evening, I am still buzzing from the atmosphere now. It was great to meet new people and see old friends and to experience the incredible Wolverhampton Art Gallery. 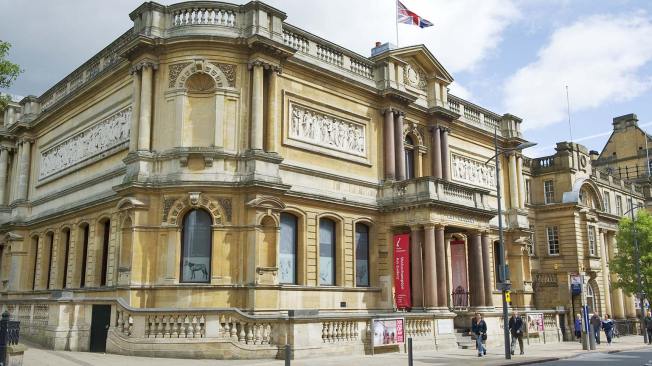 Also incredibly grateful to have shared the journey with Kathy Gee, who saved me from facing the prospect of driving to the city. We spent the first part of the evening enjoying the wonderful interior of the Posada. An incredible Real Ale pub steps away from the gallery. Well worth a visit

especially if you like Heritage pubs or real ale!

Congratulations Sarah Dixon on another fine QC Event, I hope you enjoy the rest of the festival and all the city has to offer.