It was (as ever) a great night in Birmingham at the P Café. Jess Davies hosts a brilliant night ‘Stirchley Speaks’ – an open mic spoken word event hosting 3 feature acts. I was delighted to be asked to be one of the headliners this month, alongside Alisha Kadir who I’ve known on the circuit since 2014 and Mark Kilburn who I met through Stirchley Speaks a few months ago. His poetry is filled with wisdom, life, passion, pain, sometimes humour  and it was a joy to hear a full set of it. If you get a chance or see his name on the bill, GO!

Alisha Kadir; guitarist, poet, activist, artivist… generally all round creative individual who is an active member of the Midlands arts scene. She’s performed at the NEC, TEDxBrum, Opus Club, in pubs, coffee shops and people’s kitchens. We look forward to sharing with you a combinat…ion of her music and poetry.

Mark was born in Birmingham and lived in Denmark for a number of years before returning to the West Midlands in 2004. Between 1996-8 he was writer in residence at the City Open Theatre, Arhus, and in 2002 was a recipient of the Canongate prize for new fiction. Between 2004-5 Mark was on attachment at the Birmingham Rep and in 2012 his poem about the London riots, Milton Friedman Talks Disaster Capitalism in a Burning Hackney Diner, won the AbcTales.com poetry competition. Most recently, Ballad of a Claret and Blue Boy, a poem celebrating Aston Villa, was featured in the club’s compilation of fan memories prior to the 2015 FA Cup final. Mark’s novel, Hawk Island, is available from electronpress.com

Nina Lewis is a published poet, with a fresh and honest approach to her writing. Her writing focuses on honest recollections, retold with often beautiful imagery, as well as being able to touch on more lighthearted moments. She had previously stopped writing for fifteen years and now finds herself back on the literary scene – the journey of which can be followed on her blog awritersfountain.wordpress.com 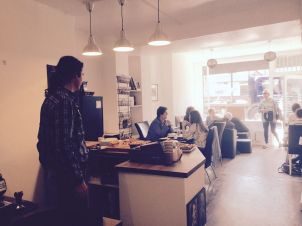 It was great fun performing an entire set, as I used new material, I also took my Kindle out for its first bought-with-this-intention outing. I have fought against this particular tech since e-readers where invented. A pain in the heart for any bibliophile, and being gadgetry you can’t even safely spray it with old-book-scent. But then in 2015 I read an article in a writing magazine that assured us they were no longer thought to be replacing the book (I mean if Apple can stop making I-pods?!) … and I started to thaw a little. I took a plane to Poland and I was the only passenger with a paperback (and no, no-one had a hardback either) and finally on the circuit I have seen plenty of people using them. I occasionally use my mobile, but I have to enlarge it, which means a lot of scrolling. Also the fact they cost 50% less than they used to is another factor.

I know deep down I am still a little unsure as it was only released from the packaging this month (it was a Christmas present from Mr G). However, I LOVE IT! So much lighter than the laptop and more screen friendly than the phone, perfect at home. I still use the laptop for writing though but have the office packages to import documents onto it. I know the cloud and ever note and the rest of it all exists – but you’ll understand, if I don’t think about it – it’s not real!

Anyway, loved performing with it and it worked well to keep me on track although I did deliver a slightly different set to the one I had prepared.

Lots of positive feedback and a definite emotional response to the more tear jerking poems. I love it when people come to talk to me afterwards, not for the ego boost or praise but to find out which words have lingered, what are the poll poems, what happens to the listener. More and more the feedback is detailed and I get what I need to hear as well as the compliments (which don’t get me wrong) are good for me to hear too. Knowing I am on the right track for my life is what really matters, the creative soul/spirit is in balance and I am a better, happier being for it.

The open mic-ers were amazing and included some real treasure and this evening Stirchley had music and dancing too. I know Jess started it with a spoken word concept and is willing to branch out and have performers open the night up with something different from time to time.

A fantastic night and a great way to start February!