I finally got to meet Daniel Sluman, a poet who I have read since 2014, when I first discovered his work. The name will be familiar because last year after a post on social media about how different the poetry circuit is for disabled poets promoting their work, I decided to promote Daniel’s new collection ‘the terrible’.

In return Daniel gave up his time to feature as a Guest Writer (alongside Alison May and David Calcutt) in INKSPILL 2015, our annual online writing retreat. Find out more right here https://awritersfountain.wordpress.com/inkspill/

Daniel Sluman is a 29-year-old poet and disability rights activist based in Oxfordshire, UK. He gained a BA and MA in Creative Writing from the University of Gloucestershire, and has previously held editorial roles at Dead Ink, Iota, and the award-winning disability anthology FTW: Poets against Atos. He was named one of Huffington Post’s Top 5 British Poets to Watch in 2015, and his debut poetry collection Absence has a weight of its own was released by Nine Arches Press to critical acclaim in 2012. © Nine Arches Press 2016

I was excited about meeting the man behind the words and also getting my hands on a copy of ‘the terrible’ which I resisted buying online or at the 52 Book Launch. It is published by Nine Arches Press and you can buy your very own copy here.

Daniel Sluman’s bleak brilliance in the terrible is a masterclass in the power of poetry to confront difficult subject matter with accuracy and painstaking openness. These are rigorous and exacting poems, that dare to go to some of the darkest places and speak with stark precision.

These poems may be stripped down, intense and utterly frank, but they are not without deep reserves of sincerity and beauty. Sluman writes of the heady cocktail of being alive, where loss, love, sex, close shaves with mortality and sharp narratives of pain and suffering are examined in concise and humane clarity.

I knew getting to the venue after work in rush hour traffic would be an issue, so I spent the night before setting up the SATNAV (also Christmas gift c/o Mr G), however due to road works and not shoddy data input on my part, it took me up to the M6, which I knew was wrong, but have also learnt that I get lost when I don’t blindly follow the SATNAV. This added extra time on, but I did manage to park relatively close by and although I missed most of Daniel’s opening set in reality I hadn’t missed most of the book launch, which was my fear. Jane Commane recorded the part I missed and you can hear it too.

This event was open to the public, I was delighted to be invited by Daniel. Gregory Leadbetter (the Institute for Creative & Critical Writing) and Jane Commane (Editor/Publisherr – Nine Arches Press) hosted flawlessly. There were readings from David Clarke and Angela France and the event sold out. We were in a lovely large room just off the library at Birmingham City University. There was a great, buzzy atmosphere and lots of poets I know, and some I didn’t, all listening carefully and enjoying the work of these three fine Nine Arches poets.

It was great to meet Emily Brenchi too (Daniel’s fiancée and administrator) -as she is not gaining financially helping with postage and packaging duties as Daniel’s book makes it way around the country/ world in brown envelopes, I thought I would mention her efforts here. Nearly as good as money or magic beans, I’m sure!

There were complimentary drinks too. I wish I could have indulged in a glass of wine to celebrate, but I was driving and had a bottle of water and bought the book instead.

I took photos of the event (on my kindle – see previous post) but have as yet, not uploaded them so I am borrowing these from Lania Knight. 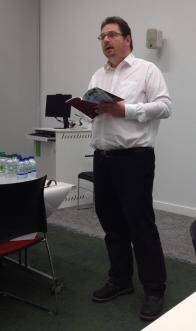 Meeting Daniel after all this time was brilliant. Generally in my pursuit of the writing world I have met poets and then discovered their work. This way round is unusual for me -it was so comfortable. By reading Daniel’s work and conversing online, we already knew each other on some level.

Hoping to see him and Emily in Cheltenham in a few months, as you can appreciate a book launch is like any major event for the main feature – everyone wants a piece of them and time and conversation are brief.

A strong second collection – a recommended buy from me, don’t just take my word for it – see the Ofi Press review and read David Clarke’s take on the evening too (see related links).