On November 13th I missed Stanza to catch the final leg of the Soapbox Tour at the MAC. I was delighted that Jasmine Gardosi had the opportunity to be one of the four core poets in this PUBLIC ADDRESS show. It was directed by Hannah Silva, award winning writer, performer and theatre maker. I was fortunate enough to catch Hannah performing at Opus, earlier this year and I knew this was a show not to miss.

From mythological women to reasons for love, from the quirky to the political, from gender to bees and everything in between – across the UK, performance poets are taking to their soapboxes and giving voice to the passions and stories within us all.

Lyrical ingenuity and heart-warming humour explode from this unique, theatrical spoken word show, directed by award winning writer, performer and theatre maker Hannah Silva, described by The Times as “one of the most ambitious and entertaining poets in the country”.

Public Address features an exciting ensemble of spoken word artists with voices hailing from all corners of the UK.

Apples and Snakes is England’s leading organisation for spoken word, with a national reputation for producing exciting, engaging and transformative work in performance and participation.

Public Address: The Soapbox Tour features an exciting ensemble of spoken word artists, whose unique voices hail from all corners of the UK. Justin Coe (Essex), Jasmine Gardosi (Birmingham), Shagufta K (Bristol), and AJ McKenna (Newcastle) explore topics of sexuality, death, mental health, love, gender, and violence, through lyrical ingenuity and heart-warming humour. This theatrical spoken word show is directed by award winning writer, performer and theatre maker Hannah Silva, “one of the most ambitious and entertaining poets in the country” The Times.

This diverse group of artists has been brought together by Apples and Snakes for a unique commission, and will be joined by guest artists throughout the tour, ensuring a special and exciting programme of events. The featured guest artists will include Henry Raby (York) and Keisha Thompson (Manchester), Ingrid McLaren (Nottingham) and Helen Seymour (Canterbury). In the South West, budding poets from Plymouth Young Writers Squad will also perform alongside the ensemble.

The performance was exciting and moving. A combination of different voices and subjects, audience participation, serious and entertaining. A cocktail mix of spoken word. The least shouty, high impact soapbox I have ever heard. Relatable and real. I really felt like I’d seen something special. This show filled me with thoughts.

asked the public to tweet and this material was used for the final performance of the show. Which in Birmingham I was fortunate enough to be part of. Although having to make split second judgements between love or not love was pressurising and difficulty.

Here are some shots from the official publicity and others taken by the Gardosi family. 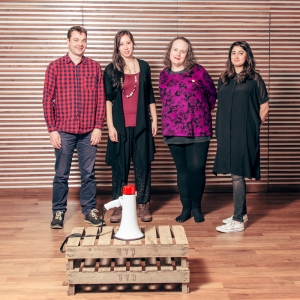 Apples and Snakes is England’s leading organisation for spoken word, with a national reputation for producing exciting, engaging and transformative work in performance and participation.