This week has been a whirl! Alongside the daily slog to pay the mortgage – I have been a one woman poetry machine!

I spent Monday night writing and preparing set lists. Tuesday night I went to Mouth and Music, the musical headliners were called The Blue Dive and it is their name that gave us the BLUE theme this month. 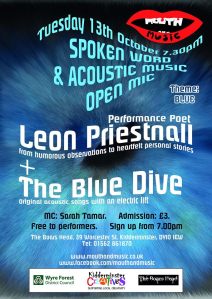 Many open options there for new material, sadly I have been so busy with other writing that I didn’t have the time to try. I do however have lots of poems that mention blue, are about blue things, I even have a gender poem (published by Silhouette Press HCE Boy Girl Issue in 2014) which is about the historical implications of blue – so with plenty to choose from, some poems that were written last year and never performed and all new to the M&M crowd, I built my set.

I was looking forward to watching Leon’s set, Leon Priestnall headlined Hit The Ode last month and he slammed it there. I am glad he enjoyed performing in Kidderminster and had a good night. His performance was confident and he met Robert Francis (of Permission to Speak) so hopefully he will be delighting the Black Country soon too.

It was a great night and I enjoyed myself immensely. There were some fab open mic-ers and great musicians and it was good to catch up with folk I have not seen in a while. 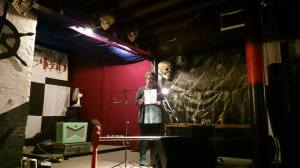 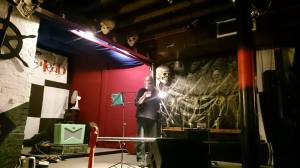 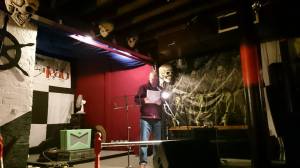 Just some of the performers at Mouth & Music this week.

Last night I went to The Poetry Café Refreshed in Cheltenham, a monthly event held at the Smokey Joe’s, organised by Sharon Larkin. Last night was hosted by Roger Turner and I was delighted to be the Guest Poet.

It was a real pleasure to hear poems from unfamiliar voices, I say that but I had already met some of the Cheltenham 52ers at Swindon and heard David Clarke perform there too. I really enjoyed myself and considering I was sitting there waiting to do my set, I didn’t feel too nervous and was able to focus on the poems. This is a testament to the relaxed atmosphere at this event.

I am glad my set went well and was well received, I was able to promote both poetry books/anthologies I am in and my up and coming pamphlet as well as giving INKSPILL a quick mention too. I had some in depth conversations with several people from the poems I had chosen to perform and even inspired, or triggered a memory at least, for Roger, who took his scribbles home and hopefully produced a poem. That result is a good night! 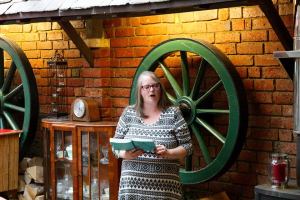 And tonight… saw Phenomenal Women taking place for the 4th year running at the Book to the Future Festival at Birmingham University. This is the 3rd year I have performed at Jan Watt’s event and I think it was the best yet.

It was a superb evening of poetry from an amazing collective of women and I think what I liked best were the brave poets who got up and shared their work, students who had come to watch and enjoy and hadn’t expected to be behind the mic. There poetry was vulnerable, edgy, deeply hypnotic and amazingly beautiful.

There were also top class performances from all the invited poets. Tonight people enjoyed a showcase from;

It was a pleasure to be part of such a great festival event held at the Costa Coffee, Student Centre, with generous payments of free medium drinks, after my coffee I treated myself to a strawberry and cream smoothie – which filled me up with sugary goodness and fuelled me home.

Now I get to wake up and do it all again!

The Festival runs until the 17th and as it is funded the events are FREE! It is worth checking out the programme if you are local and booking something. I have treated myself to a MUCH NEEDED day off tomorrow and am going to a lecture in the morning and a workshop in the afternoon.