I am delighted to announce this news!

Back in March, I entered the competition for this year’s Worcestershire Poet Laureate. I was over the moon to make the long-list. There was an interview with two of the team, at which you had a chance to read poetry as well as answer lots of questions. This idea is a good one, as you can tell a lot from people with a little informal chat and some interview questions.

From there I made it to the short-list with 6 other poets. We will compete for the title of Worcestershire Poet Laureate on the 12th June, at The Guildhall in Worcester, as part of the opening ceremony for WLF – Worcester LitFest & Fringe.

We all wrote two poems, our first of which have been published on the WLF website and are open for public votes.

I am not allowed to tell you which poem is mine, you have ONE VOTE – it’s FREE so please take some time to read the entries and cast your vote.

Tickets can be downloaded or collected from the Tourist Information Centre at The Guildhall or from Worcester Live Box Office, Huntingdon Hall, CrownGate, Worcester WR1 3LD Tel: 01905 611427 or from a member of the LitFest team. Note: When you pay via PayPal your receipt is your ticket – please print a copy and bring it with you to the event.

You can join us at the launch for just £5

I will be performing at;

The Launch Of The Festival – Poet Laureate Competition
And Young Writers’ Awards
The Guildhall, High Street, Worcester WR1 2EY
Friday 12 June – 18:30 for a 19:00 start
Join us for the launch of the Festival and watch 6 poets go head to head as
they compete for the title of Worcestershire Poet Laureate 2015.
Judges include: current Worcestershire Poet Laureate Fergus McGonigal,
Poet Laureate Emeritus Maggie Doyle, County Arts Officer Steve Wilson,
Young Poet Laureate Chloe Clarke and the Secretary of LitFest.
To open the event, we will present the prizes for the Young Writer
competition and the winners of the Flash Fiction competition will be
announced.
Tickets can be purchased online by visiting www.worcslitfest.co.uk/2015-
programme-tickets.

SpeakEasy Festival Special
Thursday 18 June – 19:00 for a 19:30 start at The Old Rectifying House,
North Parade, Worcester WR1 3NN
Here’s your chance to read your short stories, poems, prose, try out your
performance poetry or music that tells a story. This evening is for you!
Please email curators Maggie and Fergus at speakeasy.litfest@gmail.com or
arrive early to claim an open mic slot.

LitFest Solstice Walk – a fabulous freebie
Starting around 10:30pm Saturday 20 June
Join us for a spookily fun walk around Worcester’s famous waterside for the
Summer Solstice – this year we’re keeping it local – the walk will be along
the banks of the River Severn. Starting outside Cripplegate Park gates on the
St John’s side of Worcester Bridge at 10:30(ish) Saturday 20 June, following
the Jonny Fluffypunk / Offa’s Poet gig. We’ll bear health and safety in mind
and ask everyone to bring a torch and wear stout shoes / boots and warm
clothing.
The route will be along the riverside to Diglis Lock and encompass the
Diglis basin marina area. There will be poetry and prose performances along
the route to entertain you.
Start time 10.30pm – finish anticipated just after midnight.
Anyone who wants can perform their poetry, short stories or flash fiction.
We’re allocating 5-minute performance slots for those interested.
Bring a torch, warm clothing and wear stout walking shoes.
Contact secretary@worcslitfest.co.uk

These are the events I will going to – there are lots more, check the full programme.

This book launch marks the conclusion of Ben Parker’s tenure as poet-inresidence at The Museum of Royal Worcester. Ben Parker will be reading from a collection of poems produced during his residency, which will be available for purchase for the first time. This event also marks the beginning of Todd Swift’s residency at The Museum, and Todd will be reading from his highly acclaimed poetry.
Ben’s poetry has appeared in a number of magazines, including The White
Review, Under the Radar and Oxford Poetry, as well as Lung Jazz: Young
British Poets for Oxfam. His debut pamphlet, The Escape Artists, was
published by tall-lighthouse in October 2012 and shortlisted for the 2013
Michael Marks Award.

Todd is a British-Canadian poet, publisher, critic and editor. He is the editor
of numerous anthologies; and has published eight full poetry collections. His
poems have appeared widely, including in Poetry Review, and Poetry
(Chicago). In 2004 Todd was the Oxfam Poet-in-residence. He blogs at
Eyewear and runs the indie press Eyewear Publishing. Todd’s PhD in Creative
and Critical Writing is from The University of East Anglia (UEA). He was
born in Montreal, Quebec.

Festival Fringe Events with ‘ConFab Cabaret’
John Hegley
John Hegley – ConFab Cabaret Special
Monday 15th June 20.00-22.30 (Doors Open 19.30)
Tickets £10 online (address below) or £12 on the door
A fun packed variety night with lashings of Spoken Word.
John Hegley will be headlining an extra-special ConFab
Cabaret. John performed on the streets of London in the early eighties,
fronting the Popticians, with whom he also recorded two sessions for John
Peel, and has since been a frequent performer of his words, sung and
spoken, on both local and national radio and television.
Tip top support will be provided by luscious lovely local Malvern muses –
Adrian Mealing, Amy Rainbow, Catherine Crosswell, Clive Dee, Myfanwy
Fox and Sue Thompson. With a fabulous audience poem and
added merriment from international circus performer Steve Kaos!

Offa’s Poets And Jonny Fluffypunk
St Swithun’s Institute, The Trinity, Worcester WR1 2PN
Saturday 20 June – 19:00 for a 19:30 start
Offa’s Poets Bert Flitcroft and David Bingham
‘Thought-Apples’ is a collection of 25 poems by Staffordshire poet Bert
Flitcroft. They are philosophical, occasionally piquant, always accessible and
pleasing to the ear. Bert was born in 1946 and grew up in Lancashire.
Nowadays he lives near Lichfield, a retired English teacher.
David Bingham’s debut collection from Offa’s Press, ‘The Chatter of
Crows’, includes impressive Japanese-influenced haibun and haiku, which
amuse and intrigue in equal measure. David lives in Ironbridge, Telford, is a
retired Humanities teacher and has a Diploma in Creative Writing from
Birmingham University. He’s currently editor of Blithe Spirit magazine.
‘Good on the page and good on stage’ are Offa’s Poets’ watchwords.
Jonny Fluffypunk
And…the unforgettable ‘economic refugee’ from the Home Counties
returns to LitFest. Stand-up poet, sit-up storyteller and give-up musician
Jonny Fluffypunk has been dragging his art around the poetry, comedy and
alternative cabaret circuits for over 10 years. A multiple slam champion who
hates competition in the arts and an outspoken voice for anarchy, peace and
bicycles, Jonny’s a favourite with LitFest audiences. His ‘Sustainable
Nihilists’ Handbook’ is published by Burning Eye, and he is currently touring his no-fi stand-up spoken word show ‘Man Up, Jonny Fluffypunk –One Man’s Struggle with Late-Onset Responsibility’ to rousing acclaim.
An evening not to be missed! 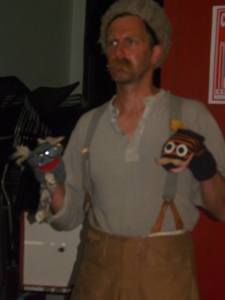 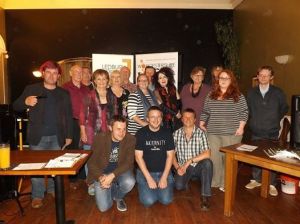