Sometimes your mind is just in the right place, or the room has the perfect mix of people or the atmosphere is calm and pleasing… whatever it was last night – a combination of all three perhaps, Poetry Lounge was magic!

I was excited to hear the featured poets Angela France and Andrew Fusek Peters and was delighted they were both on the bill together. I also had a pre-booked open mic spot (although I changed my mind on the set I delivered once I got to the venue). I shared some of my Maya Angelou poems, as well as a political one and a natural world and Restless Bones poem, gave the anthology a plug too.

Jean Atkin hosted the event this evening on her own and Jean’s calm presence and knowing the order of readers helped evoke the atmosphere beyond friendly, into homely territory, it felt like a very special night to be a part of.

It was also lovely to see the Shropshire poets again. Definitely worth the drive – although I wish I felt more like Angela about night drives. 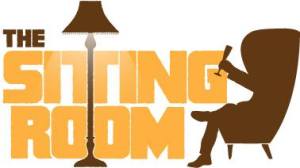 I love learning about the real lives of poets, with the same awe as children discovering us teachers don’t live in our stock cupboards and that we have a mum and dad too! Touched by new knowledge I wanted to buy one of Andrew’s older publications, ‘May the Angels be With Us’, now out of print, it wasn’t one of the titles he had brought with him to sell, but he sold me the copy he had read from. I know that I could have bought a second hand copy cheaper, but I am all for supporting poets – as I hope to be in the book selling position in the future and would rather see the (small) profit, there was a made-up statistic on TV about only being 10 people in the world making a living from being a poet, I reckon there are a few more, not many though, every little helps.

I enjoyed a great evening of poetry and came home with a scribbled palm of ideas, I do usually pack my notebook for when ideas strike, as they often do listening to poetry. I hadn’t even got my own pen!

It was a great mix of people and work and as a big fan of both Angela and Andrew (can you tell – gush) it was bound to be a fantastic night.

Claire Leavey’s performance was as exceptional as the last one I saw, it was great catching up with her again. I was delighted to meet and discover the poetry of Ted Eames, listen to Steve Griffiths again, both of whom also had books on sale (oh, to be a millionaire…. said the poet)! Martha was a bonus, she had turned up with a book and a notebook of her paternal grandfather and her husband’s grandfather and poetry from the war. As Jean said it was incredible to hear their words 100 years later.

Andrew was so relaxed he performed from the sofa! He was using his photography in slides throughout his performance and didn’t want to stand in front of the images. What wonderful images they were too. He is currently absorbed by the natural world and is discovering new talents. I had no idea he had only been shooting for a year or so, (I just figured, as with myself and many Creatives, he had fingers in many artistic pies), I think this makes his work even more spectacular. He is also entered for a National Award and treated us to that image too.

I guess it comes from his training as a poet – he is incredibly capable of catching the exact moment – akin to choosing the specific word, rather than those that will do. Andrew drew an analogy between poetry verse and a single moment caught in a shot. It was such a touching set.

He peppered it with older poems from his former life writing for children and talked about his brother. The years he was talking about were right back at the beginning of my poetry odyssey, I don’t think I had stepped up to a mic back then, although I was published (and still in school).

Angela France was equally a pleasure to hear / watch again, I have bought her books at previous events already, but there is nothing to beat a poet reading their own poem. She told her story about Laurie Lee and I love that by chance meeting that she had. Being told stories and holding them in her head for years before she could get them down on paper, in a poem. It was lovely to see Angela again, she always inspires me, her writing is so tight, so perfectly fixed together, seamless. I look forward to reading her collections again. She ended with her wonderful poem about night driving and although I understand all the imagery and drove home thinking up her words, I sadly have to admit that the glaring headlights and sharp, fast bends of my own lane journey home, were not so welcomed by me.

I was very tired and trying to concentrate hard with a head full of poetry and ideas is hard work! 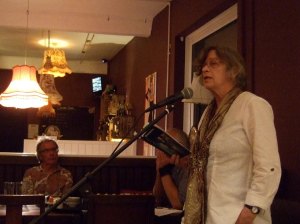 Here is Jean Atkin summing up the evening;

Just back from a great night of poetry at The Poetry Lounge! Guest poets Angela France and Andrew Fusek Peters gave us great sets, with names for herons, 18th century women who gave birth to small furry souterkins, the pursuit of buzzards …and reward of hares, and the benedictions of country lanes at night. Also great readings from our open mic slots – Steve Griffiths, Nina Lewis, Claire Leavey, Ted Eames and Martha, who read the poetry of her pacifist grandfather who wrote about WWI, 100 years ago.

I am fortunate that work hasn’t really started, I am on call but the 1st few weeks can be slack as no cover is needed. This has given me a couple of clear days for writing. This week I found out about an exciting new opportunity to present work or possibly even a workshop for a mental health festival. I am writing my bid today. Yesterday I researched some Lit Magazines and read some informative articles which I will link you up to during INKSPILL. Then the wireless connection started unfriending me and I spent time writing with ink and preparing my set for the Poetry Lounge.

Today I am working on a couple of submissions and having come home with a scribbled list of ideas after last night’s event would like to get some writing done too.

This evening is our last time up the allotment, we are emptying the shed, digging up the rhubarb and carrying long beanpoles (bamboo canes) home and then we are handing the land back to the council. It is quite sad, we have had the allotment for 5 glorious years and it has been a big part of our story (me & Mr G) …I plan to pay tribute to the past half a decade of hard graft and bountiful harvests, through poetry. This year will be the FIRST year we don’t carve our own HOMEGROWN pumpkins for Halloween. 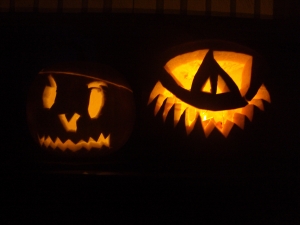 We are growing in our garden and still expect to fill the Christmas Dinner plates with homegrown wonders though. 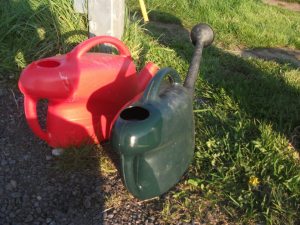