I had a superb day – even getting caught in a hailstorm in between venues didn’t spoil my mood. I also bumped into two friends, which was lovely – much as I am used to wandering solo, a festival is a better experience when it is shared!

What an amazing Poetry Festival – I thought it had been running a lot longer than 5 years, it is a great event. The Patron is Carol Ann Duffy who thought the town was perfect for a poetry festival – which of course it is!

I was unable to make it sooner than Sunday due to a family wedding meal and Word Up. I also don’t have a lot of spare cash at the moment with 2 houses to pay for, so I organised a schedule of free events and set off (a little like Dick Whittington), full of hope and poetry.

The main part of the day for me would be performing at the Open Mic Event hosted by Mark Niel at the George & Dragon pub.

The events were organised in The Edge Arts centre – a short, uphill walk from the town and at various venues in the town, the Priory, Pottery, Holy Trinity Church and several other places. As with all festivals some of the events clashed and that was a tad frustrating, but is always the case. The shuttle bus service (from the arts centre) was good, although a bit sporadic.

I had planned to get there for 10 am – had some trouble with the early morning and my SATNAV not working for part of the journey. I made it in just before 11a.m

I started at the Edge Arts Centre, looking at the Words Exhibition, Symonds was influenced by the Dictionary and created some great black and white photos depicting scenes and life that associated with certain words.

I also checked out the book stall and bought this year’s anthology of Wenlock Poetry. A great souvenir.

Then I watched Dart (24 minutes)

A short film based on the T.S.Eliot award-winning poem by Alice Oswald.  Over a decade ago, Alice began recording conversations with the people who live and work along the river Dart.  This film combines the words of her subsequent book-length poem with actual observations of life along the Dart.

Then I hot footed into town, on the shuttle bus, went to visit the Craftevan where I bought a small notebook and wished I was rich enough to buy more.

I explored the town a little on my way to the pub for the Open Mic Event, I took photos of some of the poems on the Poetry Trail, explored Wenlock books and then bumped into 2 other poets from Worcestershire Michelle Crosbie and Io Osborn, which was lovely. They were performing at the Open Mic too.

The George & Dragon was a friendly small pub, very traditional. There was a great turn out for the last of the open mic events hosted and organised by Mark Niel. I read 3 themed poems and was later stopped in the street by a couple who wanted to tell me how much they had enjoyed it. It was a great experience with many performers taking part, some of whom I knew. I was delighted that Anthony Owens also came to take part, it was great hearing him read.

Poems and Pints with Mark Niel – Nature or Place

From there the 3 of us hot footed uphill as Io had a workshop to attend. Michelle and I had a spot of lunch filled in the survey /evaluation forms. Before heading in for a wander around.

We stayed to watch the film Finished with the War (8 minutes) and then decided to head back into town.

On our way – we were caught in the biggest hailstorm ever! We got drenched, so our first port of call was to find shelter. (Along with everyone else!)

We took a wander around the town and found Croft Originals – where my poem was displayed on the trail. 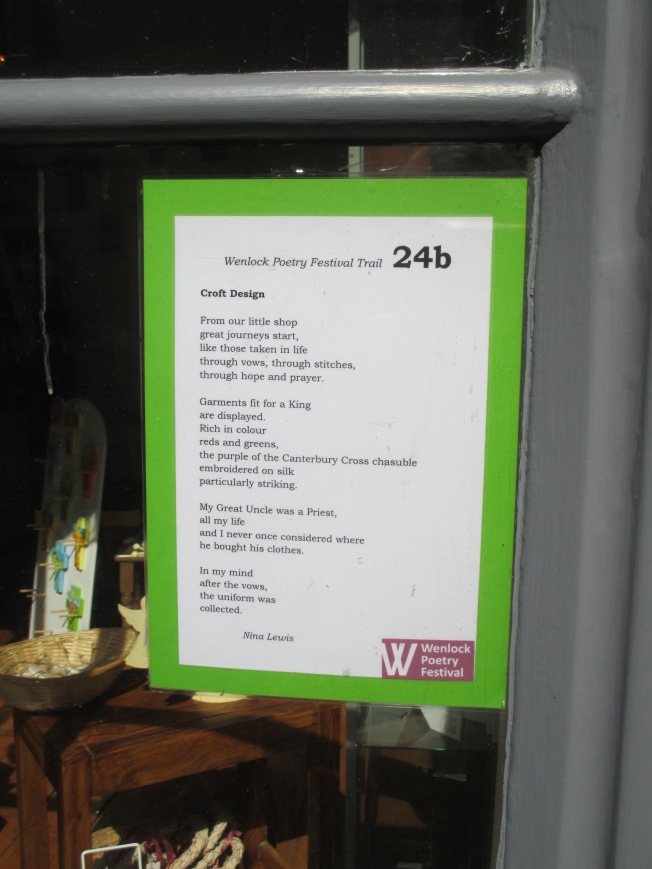 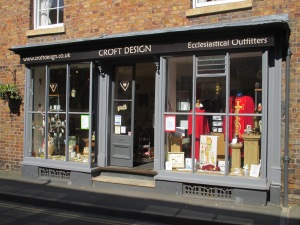 Thanks to Paul Francis for these photos – I still need to upload mine. I will add to the blog when I have with a link back to this post.

We had another wander around the bookshop

and then went to see the Guildhall –

not part of the festival venues but an impressive building and it was here that we spotted the Poetree from one of the windows. 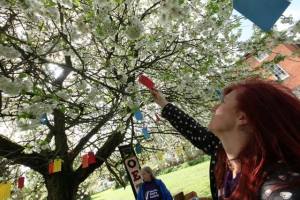 I took lots of photos of the Poetree and left a poem of my own hanging on the blossom branches.

Then we headed back to the Arts Centre to meet up with Io. The girls were going to call it a day after a drop in at the Arts Centre café. I had got tickets to go and watch the Dutch poets and they decided to come with me. Poetry from the Lowlands, featuring three of Holland’s finest writers
It was amazing and a great finish to the day.

After Io and Michelle left, I went to meet Sally Crabtree and I was very excited because I had seen her on television a few years ago. Her sweetshop was not disappointing at all and nor was meeting her, she is lovely. 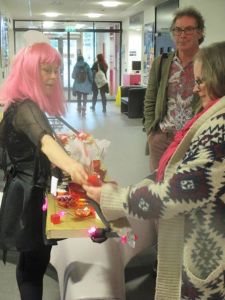 Then I headed home full of happiness and poetry. Looking forward to next year already!