If you have been reading the blog lately you will have realised that I have had a busy fortnight (10 days) with my first Literature Festival of the year! (Despite having noted Literature festivals on a calendar in the Spring.)

I had hoped to post live the daily feed from the festival events and successes. The laptop mouse control put pay to that… but we are back online with a shiny new USB mouse, very well behaved balanced on the armchair arm for most of the time. (I keep trying to use the laptop one and then I remember the new one next to me! Shhhhh, don’t tell him, he might stop working as well!)

My photos were taken from a smart phone with intention of atmosphere rather than clarity and (as with the rest of the photos on the blog) I own the copyright.

The launch night of the festival was a great atmosphere to revel in. I have missed most Literature Festivals I planned to go to this year, so I was happy not to miss one held so locally.

The launch night was also an opportunity to watch performances from the current Poet Laureate Stephen Morrison-Burke and find out who had won the coveted position of City Laureate for 2013/14. Congratulations to Joanna Skelt. 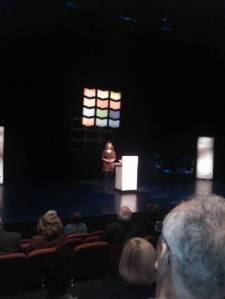 They also announced the Young Poet Laureate – a title I wish they had awarded when I was younger. Congratulations to Lauren Williams. 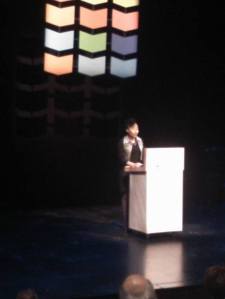 I went alone, but as I have heard a few times in the past week… the poetry world is a small one and I soon bumped into people I had met at Sarah Leavesley’s book launch (back in September).

As it was National Poetry Day I was delighted to be at a poetry event and I hadn’t been to the new library since it opened, I treated myself to a tour and a browse. Loved it, so new, shiny and exciting… sometimes I have struggled with library modernisation, loved the 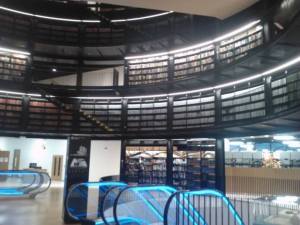 old system of tickets and stamps, but this new space is incredible and despite size and modern interior, still feels welcoming.

I spent time in the rivers and oceans book areas making a pictorial record for my National Poetry Day effort, the theme was ‘water’.

You can see my poem here

I had another adventure returning to my car, I tripped over on a cobbled street, falling face first onto all fours, trying to catch my glasses, I threw my handbag and all the papers to the floor… a nasty gash on my knee that still hurts and jarred shoulders.

Which was a great shame as I had an epically brilliant night!