The heaven’s opened this morning and treated us to a monsoon, which I appreciate as it means the allotment crops have been well and truly watered and I may not have to go and tend to them over my birthday weekend. My other waking thought was that Mr G would get soaked on his way to work – so an un-presidented event occurred and I got up and out of bed before 7:30 a.m

By 9 a.m I was back home having done the supermarket / birthday treat food shop and narrowly avoided a flood – thank goodness I am living in my hometown again after 18 years away, I know it well. The main by-pass was flooded and I had to go through the end of the waters at the height of my car headlights… I made it as it was about 8 metres until the road was clear but the traffic behind me was at stand still and a mini opposite had attempted it and got stuck. Scary stuff.

We FINALLY built the bed last night it was too tempting so after unpacking the shopping and a breakfast of birthday treat cereal (my inner 7 year old made me buy it! Chocolate pillows filled with hazelnut and chocolate mmmmm mmmmmm, a bowl of diabetes right there!) I went back to bed with my book. Of course it wasn’t long before I had to put it down and catch 40 winks. But now I am up again and plan to use the next 3 hours before Mr G is due home from work wisely!

I have been very tired recently and have been attempting to conserve energy for this birthday weekend.

Tonight I am meeting friends at my dad’s Jazz gig – that was another concern this morning in the rain… it is in a marquee outside the pub/hotel. Mr G assured me the weather was meant to pick up and be sunny for the rest of the afternoon.

The rest of the afternoon I am spending dividing my time between blogland, my inbox, chores and more unpacking. I am about to make lunch – my favourite cuisine is Chinese food so I have bought myself a sweet and sour chicken take-away from the supermarket!

The rain has stopped and the skies have brightened up, there’s hope yet for later on! 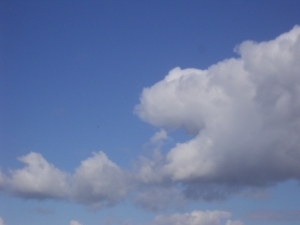